Mother: ‘My child has forgiven me and my child loves me’ 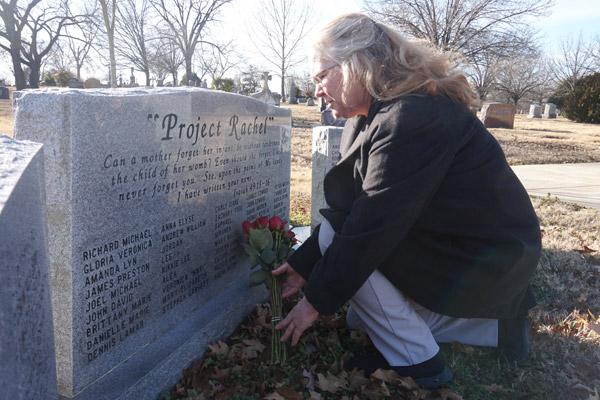 Aprille Hanson
Diocesan Respect Life director Catherine Phillips places flowers Jan. 14 on the Project Rachel monument at Calvary Cemetery in Little Rock, listing the names given by their mothers to babies who have been aborted.

Aprille Hanson
Diocesan Respect Life director Catherine Phillips places flowers Jan. 14 on the Project Rachel monument at Calvary Cemetery in Little Rock, listing the names given by their mothers to babies who have been aborted.

Are you ready? Getting help

Project Rachel is a post-abortion healing ministry of the Church. At the Diocese of Little Rock, it offers a confidential phone line with professional counselors or trained lay ministers to respond to those in crisis. The ministry hosts support groups, Bible studies, one-day and weekend retreats. Spiritual guidance is a cornerstone of the ministry, which is open to anyone.

In-person group meeting opportunities are still limited because of COVID-19 restrictions, but an online Bible study will begin the first week in March.

Healing support groups and Day of Prayer & Healing retreats will be scheduled later this year. Contact Project Rachel for specific dates and locations.

At 18 years old, Lucy was a college freshman still living at home with her parents. Angela was 19 and had already left home, falling into a world of drugs, trapped in an abusive relationship.

They each became pregnant. They both had an abortion.

Even 38 years later, Lucy can’t forget the sound of the machine. Angela, reborn in her Catholic faith, suffered from nightmares when she and her husband were hoping to have a child.

For each of them, abortion was not just one moment, one choice in their life, but the moment that changed them.

“The abortion was absolutely rock bottom for me,” Angela, 30, said. “It was something so painful and so shameful. I did not imagine the repercussions it would have on every aspect of my being.”

What binds them is not their abortion stories, but the unwavering forgiveness that God has shown them. While abortion is a grave evil in the world, the reasoning for it is not always simple.

Lucy, going by her baptismal name, joined the Catholic Church last year in Southwest Arkansas. The 56-year-old has one adult son.

“It seems like a lifetime ago,” she said of her abortion. She grew up in a Christian home, her father prominent in their community.

“Everything had to be just so. The appearances had to be perfect. ‘My daughters don’t do that,’ I’m the oldest of three girls. ‘They don’t get pregnant out of wedlock at 18,’” she said. “That’s why I went crazy because it was very demanding.”

Despite living at home, college meant freedom. She and her boyfriend both told their parents.

“They decided I would have an abortion,” she said of both families. “The father felt very bad that I had to go through that. I was overruled. I was 18 years old, but according to my parents, I was now a -- I hate to use the word -- ‘slut,’ but I can't think of anything else.”

Her voice was shaky, almost pleading as she explained, “I didn’t want to; I fought it. I didn’t want to. I was like wait a minute, what about what I think?”

When Angela found out she was pregnant, her family was not there, only her abusive boyfriend. In a year's time, her life “completely just derailed.” Raised in a devout Catholic family, she was in the pew each Sunday.

“Culturally, Hispanic women growing up, we can’t really do a lot of things,” she said, now married with an 18-month-old daughter. “I didn't go to my senior prom or school dances or participate in sports or anything. When I was older I rebelled.”

She was given an ultimatum -- follow the rules or leave. So she left.

“They locked the doors, and I couldn’t go back,” Angela said.

Angela bounced around to different homes before living with an older man. There was meth, drinking and sex. Then came domestic violence.

“He locked me in a closet one time, and he wouldn’t let me come out for a day,” she said. “... Towards the very end of this relationship was when I got pregnant. It’s sort of a big blur sometimes and I don’t know if that’s a grace God has given me or if I was just so intoxicated all the time, because I just don’t really remember.”

She went to a pregnancy resource center and heard her baby’s heartbeat during an ultrasound.

“There was this disregard that I had a baby in my womb. It was sort of like a problem I was going to take care of eventually. So it was kind of like as soon as I knew I was pregnant I said, ‘This cannot happen,’” because of  drug addiction and the baby’s abusive father.

Lucy was about eight to 10 weeks pregnant when she walked into the Louisiana abortion clinic.

“I still have nightmares about the sound of the machine. It was painful. I think even then God was protecting me because I kind of felt like I was in a fog. Before I knew it, it was over and they made me stay for 30 minutes to make sure I stopped bleeding, that it wasn’t uncontrollable bleeding. I couldn’t get out of there fast enough,” Lucy said.

On the hours-long car ride home, she and her mother didn’t speak. Her boyfriend bought her flowers. About three weeks later, he transferred schools, and she never saw him again, a decision his family made.

“It was like double heartbreak,” she said, leaving her with only nightmares. “Even sometimes I still have dreams about the sound of the machine.”

Angela drove herself to an abortion clinic in Oklahoma.

“I think all of the women feel the embarrassment of actually being there. It’s this unspoken embarrassment of you know this is totally wrong. So I really had a difficult time,” particularly signing all the paperwork, she said. “I gave up rights to any of the baby’s parts … I felt like this was a part of me that I was just selling away to somebody else.”

She got lost heading home, woozy from the medications she was given and the stents they put in her cervix. She’d drive back the next day for the abortion.

“That night I felt a ton of movement in my lower stomach. Now that I think back on it, I really do think it was the baby dying. I believe they placed something (toxic) and this child was really suffering. So I really couldn’t sleep,” she said.

“The abortion was through this suctioning vacuum placed in your cervix and everything is sucked out. It was very traumatic. I was sitting on this table and something just came over me, and I totally repented on what I decided to do. I remember getting up and saying, ‘I don’t want to do this anymore.’ I wanted to get up and leave and say, ‘No, no, no, I don’t want this.’ The nurses came in and said, ‘It’s too late, it’s going to be too late.’”

“People had to actually hold me down on the table while it was happening. They had a gas mask over my face. I wasn’t able to speak. I didn’t see anything. I was trying to scream and crying. It didn’t last long. But it really did feel like I was being raped,” she said.

After the abortion, Angela knew she had to get out. She escaped her abusive boyfriend, living in a cheap motel until he found her. He pulled out a knife when she tried to call the police, bound her hands and gagged her mouth with cut-up motel towels. When she managed to escape the room, she banged on doors at 2 a.m. No one answered, but as the man was dragging her back, the top of her bare feet scraping the pavement, two police officers ran up and tackled him.

He was sent to prison. She called her father.

“I just really feel this whole story and journey I have always identified with the Prodigal Son. The love of the Father has been super important in my life, coming back with the experience I did have with my father,” Angela said. “He pushed me away, and I was very resentful, but he really did show me the love of a father. Now I really have a better than ever relationship with him.”

It was a long road of recovery, battling depression and anxiety through prayer, counseling and adoration. Angela received her philosophy and theology degree from a Catholic university and teaches at a Catholic school. She turned to Project Rachel, a pro-life healing ministry through the Diocese of Little Rock.

“All these feelings and all this hurt coming to the surface. It just really sort of restored my feminine nature to me. It really helped me to be a mother,” she said. “It was forgiveness really that I learned. Forgiving the man I had lived with and praying for him. Forgiving myself. Knowing my child has forgiven me and knowing that my child loves me.”

When Lucy joined the Church, it was in reconciliation she first learned of Project Rachel. It took her a month to call. While everything shut down due to the COVID-19 pandemic, the ministry’s online Bible study helped her. It was a no-judgment place to heal.

“The study was of 12 different women in the Bible and how their decisions impacted them … every single person who had been in there had also had an abortion. Even one of the leaders. So it was how can we use this example to apply it to our lives and apply that healing,” she said.

While both women can attest to the evil of abortion, they are not defined by it, but rather a testament to God’s mercy.

“God loves us no matter what,” Lucy said. “... We can be forgiven through God’s grace and God’s love.”

Are you ready? Getting help

Project Rachel is a post-abortion healing ministry of the Church. At the Diocese of Little Rock, it offers a confidential phone line with professional counselors or trained lay ministers to respond to those in crisis. The ministry hosts support groups, Bible studies, one-day and weekend retreats. Spiritual guidance is a cornerstone of the ministry, which is open to anyone.

In-person group meeting opportunities are still limited because of COVID-19 restrictions, but an online Bible study will begin the first week in March.

Healing support groups and Day of Prayer & Healing retreats will be scheduled later this year. Contact Project Rachel for specific dates and locations.