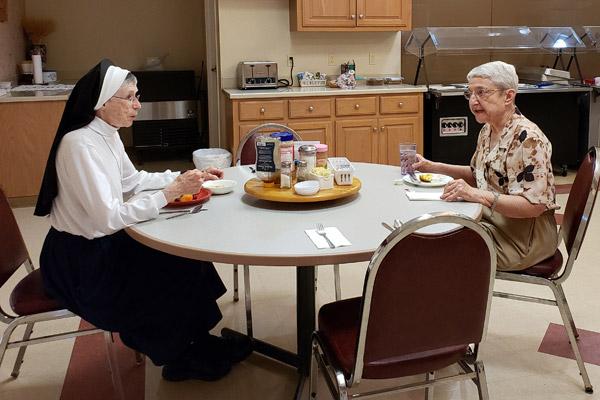 Two sisters will remain in area to retire, serve in ministries for those in need 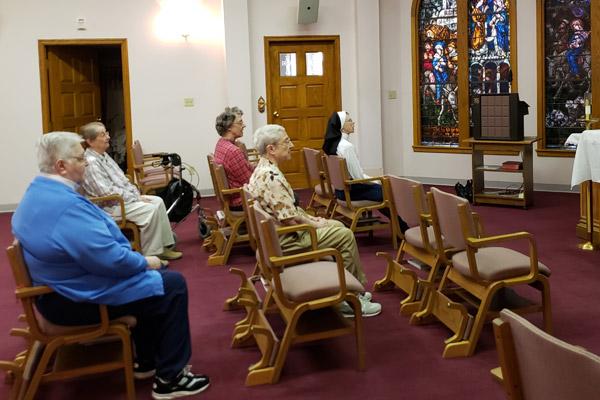 Maryanne Meyerriecks
The remaining five Sisters of Mercy living in McAuley Convent in Baring pray in the chapel March 3.

Maryanne Meyerriecks
The remaining five Sisters of Mercy living in McAuley Convent in Baring pray in the chapel March 3.

BARLING -- McAuley Convent, which has been a retirement residence for the Sisters of Mercy since 1995, will close in late March.

The decision to close was made last year by the leaders of the Sisters of Mercy of the Americas, South Central, but was put on hold because of the COVID-19 pandemic. The sisters living at McAuley Convent now have been vaccinated and will move to their new homes the week of March 22.

The convent was once home for 27 retired sisters, some who served in Arkansas and others who served in the region. Three of the remaining five sisters will move to Catherine’s Residence, the Sisters of Mercy retirement facility in St. Louis. Sisters Mary Sarto Gaffney and Dorothy Ann Plafcan, RSM, will move to Mercy Crest, the independent and assisted living center adjacent to the convent.

Until the pandemic, Sister Sarto was a pastoral minister at Mercy Crest, a sponsored ministry of the Sisters of Mercy, and plans to continue her service there. Before moving to McAuley Convent in 2014, she was the librarian at Fort Smith’s Immaculate Conception School from 1979 to 2014, and also at Trinity Junior High School from 1979 to 1994. In 2009, when Sister Sarto was named grand marshal of Fort Smith’s St. Patrick Day Parade, Sharon Blentlinger, Immaculate Conception principal, praised her as “the proverbial ‘pot of gold’ at the end of the rainbow.”

“COVID has been a life changer, showing us everything we took for granted,” Sister Sarto said. “I have prayed harder to make the best of a challenging situation. I walk outdoors on the grounds and pray the rosary, interceding for people who’ve had COVID and for the vaccine.”

She has missed her ministry at Mercy Crest, where she visited the residents, reading Scripture and praying with them, telling stories and encouraging them to exercise. During quarantine, she kept in touch with them by phone.

“I have lots of memories of McAuley and all the sisters that used to live there,” she said, “but we can’t live in the past. Mercy Crest will be a different situation in many ways, but I’m ready for it.”

Sisters Jolitta Konecny, Betty Ann Elmer and Mary Ann Hardcastle, RSM, who will be moving together to St. Louis, said they know many of the sisters in Catherine’s Residence from previous assignments. Although they will miss McAuley Convent, they know they will be welcome in their new community.

Sister Jolitta has a deep connection to Fort Smith and keeps in touch with many of her former students at St. Anne Academy, where she taught business and was the cheerleading sponsor.

“In the 1960s we didn’t know what a computer was,” Sister Jolitta said, “but I encouraged senior boys to take a year of typing and get to know the keyboard. Years later a number of them worked with computers and thanked me for teaching them.”

During her years at St. Anne, she saw that desegregation didn’t end prejudice.

“Our kids learned a lot about racism,” she said, “because some schools refused to play our teams since our school was integrated.”

Later Sister Jolitta served as an assistant principal at Mount St. Mary Academy in Little Rock and as the office manager at St. Joseph Hospital in Hot Springs. In Ardmore, Okla., she supervised the opening of a new hospital. When she first retired, she lived in the Little Rock convent and helped at school until she moved to McAuley Convent in 2016.

“The COVID crisis was extremely difficult for us,” she said. “Father Les Farley came to say daily Mass, but we couldn’t allow any visitors to attend. Father Les was very strict with his own quarantine because he knew he couldn’t take care of the sisters if he was exposed to the virus.”

“Catherine’s Residence has beautiful grounds, and I lived with some of the sisters there during my time in active ministry,” she added. “My former students and friends have my address and phone number, and I hope they will stop by and see me when they visit St. Louis.”

Mercy Crest will take over the McAuley Convent building, which will allow the independent and assisted living ministries to expand. Of the eight convent employees, two of them will continue to work for Sisters of Mercy ministries.

“Although the convent is closing and some of our sisters will be leaving Barling, others remain in the Barling-Fort Smith area,” said Sister Jane Hotstream, leader of Sisters of Mercy, South Central. “We are encouraged by the continuation of Mercy’s presence in the area through our ministries, sisters, associates and coworkers.”

Sister of Mercy leading interfaith place of prayer in LR

Sisters of Mercy honored by hall of fame induction