Walking through suffering to peace and hope

When tragedies, death and illness strike, Catholics look to Jesus in carrying cross 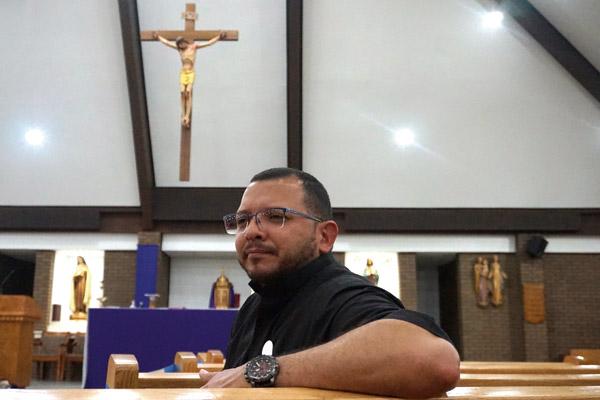 Aprille Hanson
Associate pastor Father Nelson Rubio sits in the sanctuary of St. Theresa Church in Little Rock March 13. He chose to put more red paint on the suspended crucifix, to better display the bloody sacrifice and suffering Jesus endured. For the past seven years, he’s had his own cross to bear, suffering with Guillain-Barre syndrome, which attacks his nerves.

Aprille Hanson
Associate pastor Father Nelson Rubio sits in the sanctuary of St. Theresa Church in Little Rock March 13. He chose to put more red paint on the suspended crucifix, to better display the bloody sacrifice and suffering Jesus endured. For the past seven years, he’s had his own cross to bear, suffering with Guillain-Barre syndrome, which attacks his nerves.

Words from Scripture, saints, authors and the Catechism can bring comfort and strength in suffering.

It was 1 a.m. Nov. 18, 2020, when Marilyn Henderson’s life changed forever. She rushed to her daughter Debbie Allen’s home just a few blocks away after receiving the phone call. “When I saw all the police cars and the ambulances, it seemed like I just instantly went into another world. All I could do is sit there and cry,” said the 78-year-old parishioner at Immaculate Heart of Mary Church in North Little Rock (Marche).

Lou Keller’s call came about 1:15 p.m. on Aug. 18, 2020. Because of the COVID-19 pandemic, Keller, 70, had not been able to enter CHI St. Vincent Infirmary in Little Rock where his wife Geneva was taking her final breaths.

Msgr. Scott Friend learned in the early 2000s that his life and ministry would never look the same, as Multiple Sclerosis would create unpredictable havoc in his body.

Father Nelson Rubio, a native of Venezuela, was diagnosed with Guillain-Barre Syndrome, which causes the immune system to attack the nerves, while he was a seminarian. When he contracted the disorder after a flu shot in 2014, he questioned everything.

With tragedy, it’s human nature to ask, “Where is God?” For Catholics, the answer is the crucifix, a brutal, pure symbol that Jesus feels the pain in every facet of our suffering.

“(My professor) said this: It’s not God who gives us the cross; it’s life that gives us the cross and it’s Jesus that shows us how to carry it,’” said Msgr. Friend, diocesan vocations director. “Christianity does not get you out of life. We have to understand we have a physical body, and we are a part of the world and subject to the nature we live in and whatever that nature is ... death is a reality, but the Lord comes to save us.”

In the 2020 book “O Death, Where is Thy Sting?” Jesuit Brother Joe Hoover offers a unique meditation on suffering that doesn’t try to justify it with empty platitudes and cliches. It lays out all the questions on suffering amid stories of real pain in the world.

When someone says “but for the grace of God” a person was saved, Brother Joe asks, what then can justify someone else’s demise or suffering in life?

“Really? The shining thread of God’s grace was held out to you and not to him? And he received from the Lord what? A sharp stick in the eye?” Hoover writes. “Sometimes the goodness of God, the order of the universe, and the joy of any given life appears to be a tightrope made of braided grass: it could disintegrate at any moment.”

It was a lesson Msgr. Scott Friend learned after being diagnosed with relapsing-remitting MS, a form with symptoms that can strike at any point.

According to the Centers for Disease Control and Prevention, six in 10 U.S. adults suffer from a chronic illness. Msgr. Friend had to learn to live with MS within his vocation, through trying multiple different medications, some that reduced his immune system, and giving himself an injection in his leg every week for four years. In 2017, he made the decision during Lent to stop his MS and pain medications and has not taken any since.

“It allows me to experience the cross in a way I never did before and an intimacy I never had before. What Jesus does on the cross, he takes our cursing and returns a blessing. He’s loving us from the cross,” he said, admitting it took time to get to the place of peace in suffering. “Ultimately it’s a conversion to the Lord. This was not just overnight. I didn’t just say, ‘Thank you Lord, everything is hunky-dory.’ That did not happen. It took time.”

For Father Nelson Rubio, time turned his hopelessness to hope. The CDC states the risk of getting Guillain-Barre Syndrome is very rare. There is no cure and it can be deadly.

“I was sad. I was angry. I didn’t have hope … little by little, I was talking with God and said ‘OK, you bring me here to a new country, a new world for me and I try to serve you and you pay in that way? It’s just not worth it; it is not fair,” he said “I was talking to him every day. Every day I found an answer.”

As associate pastor of St. Theresa Church in Little Rock, his condition is part of his mission to help others who are suffering, despite the “constant pain.”

“I’m human. It’s like Jesus before he died. He didn’t want to die on the cross. He said, ‘Father, keep the chalice, but I’m willing to have done what you said,’” Father Nelson said. “And little by little, it took a while, but I am here. So I tell God, ‘Tell me what you need me to do and I will do it.’”

Marilyn Henderson misses the conversations she had with Debbie Allen, the oldest of her four children.

On Nov. 18, Debbie Allen, 61, and Debbie’s daughter Amanda Dewitt, 31, were shot and killed by Dewitt’s ex-husband, who then committed suicide. They were killed in front of their 2- and 10-year-old children.

“Right away I felt empty because she took part of me with her. I gave birth to her. That part of me felt empty,” Henderson said. “When people say give it to God, in some ways yes, but you just can’t turn it over and go about your life. That’s not going to happen. It takes work.”

People who do not acknowledge another person’s loss add to the suffering, as Brother Joe writes, “Suffering gives you the power to make rooms go hush when you enter.”

“I depend on God a lot. I’ve always been close to God, but then, I still am, but there’s something missing. I don’t know if you’d say your heart or soul, but that part I always felt the warmth of God in me, I don’t feel that now,” she said. “I know it will come back. The best piece of advice to give anybody is keep up your faith and don’t hold it in. Get help. Whether it’s a friend, relative, really these (grief support ministry) groups are the best thing in the world … Cry, scream, yell, whatever it takes.”

Lou Keller tried to hold back tears while he remembered what made him smile about his wife.

“She had a wonderful laugh. She loved to watch Hallmark movies. That show ‘Monk’ would make her laugh … I can’t watch it anymore, but I know it is on,” he said.

The two married in 1976 and were parishioners at Christ the King Church in Little Rock. Successful in her career,  Geneva commanded a room in a male-dominated industry as a senior vice president in customer service at a bank. She later excelled at interior design. Their marriage was strong but plagued with financial and health problems as she struggled with bipolar disorder and later Parkinson’s disease. The two adopted her great-nephew Julian, now 12, who was a bright spot in their lives. But in early 2020, during a mental health crisis, she wanted a divorce. The couple remarried a month before she died.

“The bipolar is what ended up with her going to the BridgeWay (mental health hospital). I didn’t see her for three weeks,” Keller said, after his wife asked for help. She was taken to CHI St. Vincent Infirmary in Little Rock after two nights of throwing up.

Geneva, 66, was put on a ventilator and eventually had a heart attack. He got a call about finally being able to go in and see her, but minutes later it was too late.

“All the emotions. What is going on, I can’t believe this is happening, what do I do? God, please help me, give me the strength to go through this,” Keller said.

He sought out professional counseling and support from parish grief ministries but has taken a break.

“You’re strong right after the death … I was real strong through the funeral. Right after that, it hits you really bad. It’s like a knock in the head. Men are different than women, but find yourself a grief class and go to it to start out” and get a physical from a doctor, he said.

Though it is innate in us to try and fix the unfixable with every loss, every unfair circumstance, Brother Joe doesn’t try to justify suffering. It just is.

“While the world still tries to get a grip on God, remove barriers to Christ and find the perfect pitch between conventional reality and ultimate reality and claim whole-heartedly its sorrowful condition, there are -- did we say this already? -- just a lot of intensely disturbing things that go on down here and never seem to end,” he writes.

Words from Scripture, saints, authors and the Catechism can bring comfort and strength in suffering.