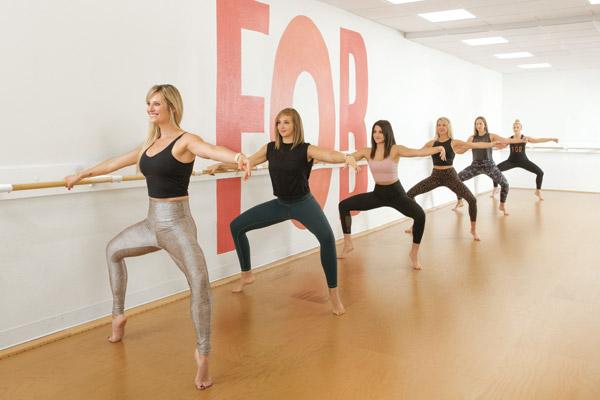 Catherine Covington Thorpe is so high-energy; you nearly break a sweat just talking to her. The sassy Monroe, La., native knows no other way but to get the most she can out of life and the people around her.

“I love launching things and starting things. I just love it,” said the entrepreneur and mother of three. “I’ve always had this major entrepreneurial fire in my belly.”

“Basically, what I do for a living is cheer people on. I’ve always taught dance and the thing I loved about teaching was the high energy, the sweatiness, the really high intensity of the music. I don’t know; I’m just an overgrown cheerleader, I guess.”

Covington Thrope comes by those rah-rah attributes naturally, having cheered at various levels since she was a teenager. She began at Mount St. Mary Academy in Little Rock, then was on the dance team for the Ole Miss Rebels in college. After that, she was a member of the NFL’s Kansas City Chiefs cheerleaders. Along the way, she found a way to combine her love of dance and cheer with her natural entrepreneurial spirit.

“Basically, what I do for a living is cheer people on. I’ve always taught dance and the thing I loved about teaching was the high energy, the sweatiness, the really high intensity of the music. I don’t know; I’m just an overgrown cheerleader, I guess.” Catherine Covington Thorpe

“I started Oxford, Mississippi’s first competitive kids’ cheerleading program and grew it to eight teams by the time I left,” she said. “I started teaching dance and selling dance and cheerleader apparel pretty soon after college. I was a high school dance team coach and I coached the University of Kansas competitive dance team when we lived in the city.”

“In fact, I taught until I was pregnant with my third baby and the schedule for teaching just got to be too much.”

Shortly after that third baby was born, Covington Thorpe was introduced to barre (pronounced bar), a hybrid workout class combining ballet-inspired moves with elements of Pilates, dance and yoga.

“I tried my first barre class, and I immediately fell in love with it,” she said. “My dream was always to own my own dance studio, and I wanted to bring that energy to a traditional barre class.”

Barre was so new to Arkansas that Covington Thorpe wasn’t sure it could support a stand-alone business. Instead, she began to pitch the idea to her health club, which repeatedly turned her down. Finally, one fateful day she got her big break.

“All of the instructors were either injured or sick and so management begrudgingly gave me a shot,” she said. “I did a good job; I’d developed my own format, and I taught it at different athletic clubs around town. Everywhere I went, the classes got really packed to the point where people would throw elbows to get in the class and do it outside in the lobby. It was really fun.”

“I had several people approach me and say, ‘You know, you should really do something with this.’ I started going to a lot of fitness conventions and did a lot of research and found there wasn’t anyone doing what I wanted to do. I was like, ‘Well, I guess I’ll do it.’”

So began the process of developing the Full Out Barre concept, first as a nationally accredited workout plan that she rolled out in 2017, followed by a brick-and-mortar Little Rock studio in 2018. She had just sold her first franchise when the pandemic essentially shut down gyms and fitness centers from coast to coast, something she’s glad to get past.

“From the get-go, I wanted to set up everything to be replicable,” she said. “Everything I do, I try to make it so it can be franchised and sold.”

Talking to her today, it’s easy to imagine Covington Thorpe wheeling and dealing to grow her business empire. So much so, it’s hard to envision how she describes herself at MSM, from which she graduated in 1999.

“It took me several years to find my group of friends at Mount. It definitely did,” she said. “I was somebody who was kind of set up for failure. I had some family issues and I had some health issues. I wasn’t the smartest person. I’ve never been a star student. I’m a solid B-average gal.

“I could have been set up to come away feeling less confident, but I didn’t. I came away with a lot of self-confidence and felt affirmed in who I was and not trying to be somebody I wasn’t. The Mount gave me that.”

The impact of the school was so profound that Covington Thorpe said it lends direction to her as a business owner all these years later, a business she uses as a platform to improve others’ self-image.

“I want our studio to be a place of refuge where every shape, color, size, background is welcomed, feels loved, feels accepted and feels encouraged,” she said. “I tell my staff all the time, ‘I don’t care if the woman walking in drove a beat-up van and is wearing a baggy T-shirt. You treat her like she is the most important woman in the room.’ That’s a big part of what we do and it is one of the most beautiful pieces of my life.”