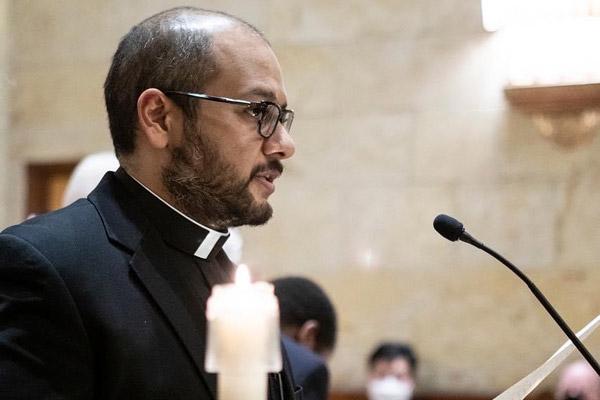 For Deacon Emmanuel Torres, his ordination has been a long time coming; 11 years, to be exact.

But God had a plan, from helping him work through the challenging social aspects of being a priest to recognizing that the deep emotions he feels for others is a gift.

“Trust in yourself. That is the biggest lesson,” said Torres, who will be ordained a priest May 29. “Trust that I can do it and not only through my merits, but through God. Trusting that God will work through me to reach someone else.”

Torres moved to Arkansas from Mexico with his family at 12 years old. Because they were not aware of a church celebrating Spanish Masses in 1999, the now 34-year-old did not go back to Mass until he was about 19. He watched the faithful devotion his parents shared, praying daily and blessing their children.

“I lived my faith at home,” Torres said. “Those memories are in my mind all the time.”

High school was a turning point.

“There was a time I didn't know what to do with my life. It was a very hard time. I remember a friend from high school,” invited him to a youth group at St. Edward Church in Little Rock. “I always knew God was the answer, but in my mind I said, ‘No no no,’ and then I gave up and said, ‘OK, fine.’”

During a stop at St. Meinrad Seminary in Indiana with a seminarian friend, his heart was moved.

“As we left the seminary to go back to Arkansas, I’m very emotional; I was crying,” Torres said. He attended the diocese’s “Come and See” retreat in 2009 and became a discerner at the House of Formation the next year.

Seminary pushed him out of his comfort zone, including a fear of public speaking -- something he works through with “practice and a lot of prayer” -- and Clinical Pastoral Education, serving as a hospital chaplain.

“It was very difficult because I’m not very good at going to someone’s personal space without knowing them,” he said.

One patient touched his heart. She had a stroke and would not talk to him initially, but after the third time, they sat and cried together for an hour. She requested he be with her and her family when the nurse told them she’d be going to hospice.

“God gave me the opportunity to meet her the third time … being by her side, knowing she’s not alone,” he said.

“I felt like a stranger,” initially with a divided parish community, he said. “I guess my focus will be making them feel part of the Church. I think that will help them to realize that they feel that the Church belongs to them and they will take care of it as well and work their talents in the church.”

In his priesthood, he hopes to love his parishioners as children.

“I have never loved someone as my son or daughter. I would love to be able to be a father to them,” Torres said.