Chambers became legally blind but she is still pursuing goals in swimming, medicine 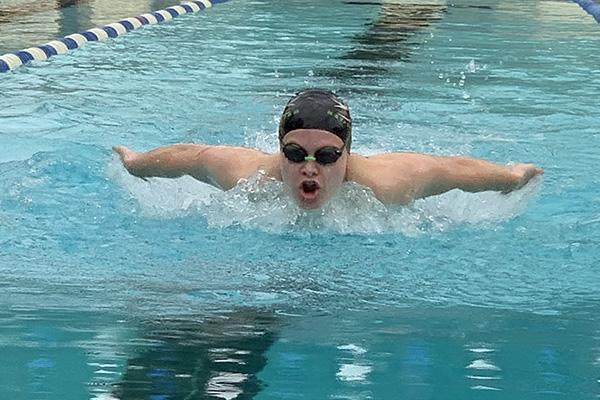 Courtesy Alison Chambers
Mount St. Mary Academy senior Olivia Chambers, 18, practices in Little Rock this past April. She is going to compete on a Division I swim team in college this fall.

Courtesy Alison Chambers
Mount St. Mary Academy senior Olivia Chambers, 18, practices in Little Rock this past April. She is going to compete on a Division I swim team in college this fall.

When Olivia Chambers walks up to the edge of the pool during a tournament, her mind zeros on her one goal -- swim fast.

"Once I get up on those blocks, I trust myself that I've practiced enough that I'm like, 'It's just time to race; all you need to do is dive in, all the rest you've already practiced so there's no need to think about anything except going fast,'” Chambers said.

The oldest daughter of Brad and Alison Chambers graduated from Mount St. Mary Academy in Little Rock with a 4.375 weighted GPA. She will be a Division 1 swimmer for the University of Northern Iowa this fall.

At 4 years old, Chambers learned to swim, and at 7 years old, she broke a state record for the 500 meter freestyle. She hasn’t slowed down. Practices are four days a week beginning at 6 a.m. and she returns to the pool at 4:30 p.m. She competes in club swimming year-round and on her high school team from October until February.

The COVID-19 pandemic canceled tournaments and swim meets, but it was not the biggest obstacle she has faced.

“Back in August 2019, in an instant, I was reading a book, and then all of a sudden, everything was so blurry. I was unable to read my book or anything. And so I went to the optometrist, and she's like, ‘Oh OK, this is normal, it's an accommodative spasm,’ and she prescribed me dilating drops to break it and then move on,” she said. The drops did not help.

“In the beginning, I was very angry, and I would say that I did not really use my faith to help me at all,” Chambers said, who attends Trinity United Methodist Church in Little Rock.

Her perspective changed when an MRI and CAT scan revealed she did not have a brain tumor.

“I don't know, something clicked, and I was like, wow, I've never thanked God more in my life than this moment right here because I can deal with a lot of other things. I'll deal with the blurry vision as long as it's not life-threatening.”

In February, a specialist in Ohio diagnosed her with parinaud syndrome, with lesions on her brain stem from a vitamin B1 deficiency. Chambers is legally blind, and her vision is still blurred, likening it to a camera out of focus, closing one of her eyes to control her shaky vision.

“I do question God a lot, like, ‘Why me?’ Because I think everyone does that. I have those moments, but I get over it. And another thing that's really helped me is to pray for people who are worse off than me, because there are people who are 100 percent blind,” Chambers said. “And so praying for others also really helped me and it kept my eyes open that, you know, it's not just me suffering, and I can get through this.”

Chambers will double major in biology and psychology and wants to go to medical school.

“I would say that Mount has really helped me formulate my opinions in a way that I can express them in a more professional way and just help me put myself out there more and make me try new things and find new friends, and so I'm really thankful for that,” Chambers said.