After his diaconate ordination, he is serving in Fort Smith 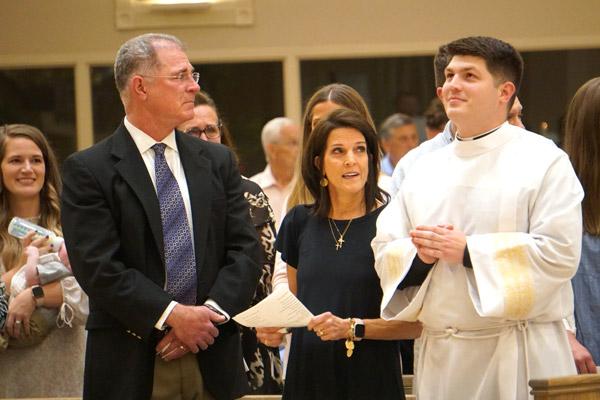 Malea Hargett
Daniel Wendel looks up at the beginning of his diaconate ordination Mass May 26 at Christ the King Church in Little Rock with his parents, Dr. Paul and Kathy Wendel, at his side.

Malea Hargett
Daniel Wendel looks up at the beginning of his diaconate ordination Mass May 26 at Christ the King Church in Little Rock with his parents, Dr. Paul and Kathy Wendel, at his side.

Daniel Wendel was baptized, confirmed and received his first Communion at Christ the King Church in Little Rock, and on May 26 he was ordained a deacon there, surrounded by his large family and close friends.

His pastor for most of his life, Bishop Francis I. Malone of Shreveport, returned to concelebrate the Mass with Bishop Anthony B. Taylor. The current pastor, Father Erik Pohlmeier, was an associate pastor when Wendel was young. Father Pohlmeier placed his Roman collar on the then 4-year-old in hopes one of the Wendel boys would consider the priesthood.

“I was very young, 5 or 6,” he said when he first thought of being a priest. “The joy of priests was infectious to me. I had a joyful disposition about me and just seeing priests with that same joy was very attractive to me. It made sense … Father Erik was always praying for me. That yearning and desire never went away.”

His calling to the priesthood was solidified at the Easter vigil during his senior year of high school and as he watched nine other parishioners committed as diocesan seminarians. The explosion in parish vocations was attributed to Bishop Malone’s leadership and perpetual adoration in the parish.

The example of other young men joining the seminary and getting ordained made it easier for Wendel to join the seminary after graduating from Catholic High School.

“The fraternity and community that has been formed is incredibly helpful,” he said. “I saw seminarians as real, not as guys sitting in their room praying and reading the Bible all day. You get to see the other great parts. We get together to watch the Hogs. It makes it so you have this fraternity around you that is real and authentic. You can see I don’t have to give up my whole world and everything I enjoy to do this.”

One of the hobbies Wendel enjoys is playing sports, particularly soccer, basketball and lacrosse, and he hopes he can use those times during practices and games in his parish assignments to minister to parishioners.

“Sports has a lot to teach young kids,” he said. “We are never working alone. Hard work can pay off.”

At his ordination Mass, sitting in the front pews wiping away tears were his parents, Dr. Paul and Kathy Wendel, his three older brothers, their wives and children and his two younger sisters.

“At the holy hour before Mass and when he was laying prostrate on the floor, those were the moments when it hit me,” Kathy Wendel said of her son’s transition to being part of the clergy.

As a transitional deacon, Wendel made promises of celibacy, prayer and obedience to Bishop Taylor.

Reflecting on the second reading Wendel chose from 2 Corinthians, Bishop Taylor said, “St. Paul speaks about radical service, describing himself as ‘your slave for the sake of Jesus.’  There is nothing more radical than that. To be a slave means to belong to someone else and to live one’s life in humble service.  Daniel, by ordination, you become united to Christ … In Greek the word deacon means ‘servant,’ not ‘slave,’ but the longer you are in ministry, the greater you will feel the Lord’s claim on you, to the point that St. Paul’s language of being God’s slave for the sake of Jesus will begin to make more and more sense.”

Wendel, who is scheduled to be ordained a priest in May 2022, began his summer assignment at Immaculate Conception Church in Fort Smith June 2. In August he will return to Assumption Seminary in San Antonio to finish his final year of studies.