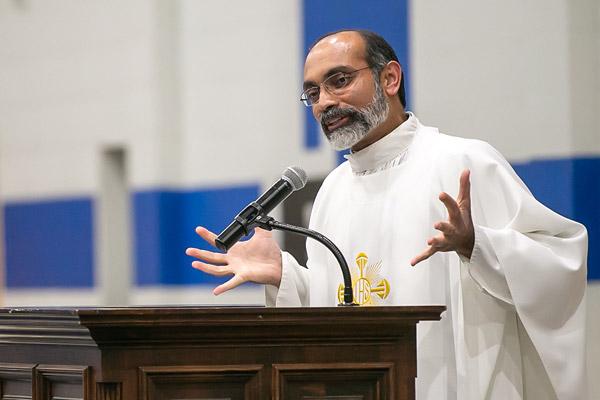 FORT SMITH -- Father John Antony spent his 25th year as a priest dealing with the COVID-19 pandemic and learning new ways to minister to his parishes.

“In the last 25 years, I learned that priests can only offer the people two things: the sacraments and the Scriptures,” he said. “The pandemic allowed me to really delve into the Scriptures and discover how much they feed and nourish us spiritually.

“The Church is set up with two tables, the table of the Word and the table of the sacraments, Father Antony said. “I prepared online Scripture studies because so much of the activity of the Church was curtailed, and we had to reach people through technology. I recorded them on my phone, 10 sessions and a study guide for Luke, Mark, Revelation and Acts. I put them on the church website so people could watch them at home.”

The pastor of Immaculate Conception Church also fills his day with overseeing Our Lady of the Ozarks in Winslow and as administrator of Trinity Catholic School (formerly Trinity Junior High School) in Fort Smith. As his 25th anniversary approached and pandemic restrictions were eased, Immaculate Conception held its annual festival, and Trinity Junior High hosted two graduations. The parish held an open house May 23 to celebrate its pastor.

“A priest can be as busy as he wants to be,” Father Antony said, “and if he is proactive, he can be very busy by choice. I can’t blame anybody else for being busy except myself.”

He was ordained by Bishop Andrew J. McDonald at the Cathedral of St. Andrew in Little Rock on Pentecost, May 25, 1996, the only priest to be ordained when his ministry was greatly needed.

“Two seminary professors from Holy Trinity (in Dallas) came, and Father Warren Harvey preached and sang.” Father Antony said. “I was so nervous during my first Mass. I completely forgot to say the Gloria on the feast of Pentecost,” he said.

He describes his priestly ministry as feeding people the Eucharist and being fed by their faith.

“In 25 years, I have not been able to hold down a steady job,” Father Antony preached in his anniversary homily May 23, “but I have also fed 14 different spiritual families, and those families have fed me like a bride and groom feed each other cake on their wedding day … I would submit to you that there is no meal more nutritious or nourishing, more life-saving or life-giving than holy Communion.”

Father Antony’s  strong support for Catholic education is born from his own experience. When his family immigrated to Little Rock from India, they sent their children to Catholic school as soon as they could afford it. He began fifth grade in St. Theresa School in Little Rock, graduated from Catholic High School and Holy Trinity Seminary in Dallas. He has published several collections of homilies to benefit St. Joseph School in Fayetteville and Immaculate Conception and Trinity Catholic Schools in Fort Smith.

“We reach out to youth through our Catholic schools, and they are near and dear to my heart,” he said. “As a child, attending all those Masses and seeing the priests was very inspiring to me. My own formation took place at Catholic schools.”

He sees reason for both optimism and concern in the future.

“On the positive time, we’ve seen a real growth in vocations,” he said. “On the somewhat negative side, I’ve been saddened by the closures of Catholic schools, such as St. Boniface locally.”

He hopes to continue to look deeply into the riches of Scripture in the future.