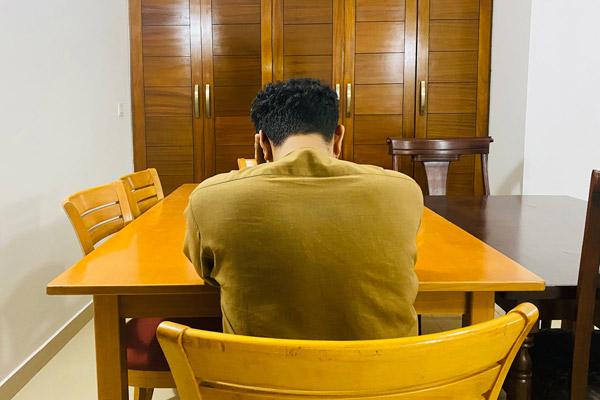 Shadab, 18, was ready to leave Afghanistan to travel nearly 7,500 miles to begin his senior year of high school at Subiaco Academy.

He knows six languages -- “it’s my favorite thing to do,” he admitted -- and had high hopes of studying at an American college next year. The college-preparatory environment and challenging curriculum at the all-boys Benedictine school drew him in after just a simple internet search of schools in the United States. He knew that’s where he wanted to study; he applied and was accepted.

But within a month, his entire world changed.

“We have no future,” Shadab said bluntly, with the sting of desperation in his voice during a phone call from Pakistan with Arkansas Catholic Aug. 31. Shadab, who preferred to only use his first name, had his student visa denied a second time Aug. 26.

“My visa got denied, I can’t go back to Afghanistan as I have American documents with me as well. I’m scared now. I’m more scared now.”

“I have no future, my younger sister has no future because I'm not able to go to school anymore. As an immigrant in Pakistan, I'm not allowed to do my school in Pakistan,” he said. “My visa got denied, I can’t go back to Afghanistan as I have American documents with me as well. I’m scared now. I’m more scared now.”

Shadab’s plight is a familiar one for countless young people after the Taliban overtook Afghanistan  Aug. 15, entering the capital of Kabul as President Ashraf Ghani fled. The U.S. withdrew its final troops Aug. 30, the end of a 20-year war.

“What matters right now is my family is in danger,” he said.

Shadab was born in the Ghazni province of Afghanistan as a Hazara Muslim. Representing just 9 percent of the population, Hazaras are one of the most persecuted religious minorities by the Taliban, according to Amnesty International.

The family moved to Kabul when he was 7 years old.

“That movement was also because of Taliban, as we had no access to the primary rights, like having a good school with a high quality of education,” he said.

Shadab explained for most Afghan children, there were “no typical nights and days at all” for his family. There were no family vacations, as traveling came with its own risk of being killed by extremists.

“We were going to school and come back,” he said. “We had no chance of being happy. Like spending your days in life, as I understand, as I see other people in other countries, we didn’t have that chance.”

His uncle and grandfather were murdered by the Taliban in Ghazni. He declined to go into detail about what happened.

“We are from Afghanistan, we have the right to travel to each city we want, like for a picnic or travel for something like that, but we were not able to do that because we have been killed,” Shadab said. “There are so many examples of Hazara people who have been killed on the roads. We have no access to our primary rights as a human being.”

Despite living in a country with few opportunities, Shadab felt safer in Kabul and was hopeful for his future. He applied for and was accepted into three boarding schools in the United States, including Subiaco Academy, which he ultimately chose.

“Academically he’s exceptional,” she said. “We are looking for students who are already well-rounded -- he checks all the boxes to be a wonderful student academically, from a cultural standpoint, from an athletic standpoint; he was nationally ranked as a soccer player in Afghanistan.”

Shadab’s student visa was first denied July 6 and then again Aug. 26. He traveled to Pakistan because the U.S. Embassy in Afghanistan was closed because of the COVID-19 pandemic.

“I traveled to Pakistan by land, I crossed the border, and I saw them. I saw them with my own eyes,” he said of Taliban soldiers. “It was dangerous; looking at their faces was dangerous. Everyone is scared of dying.”

Despite all the paperwork, he was told he was denied because he has no “strong ties to my country,” he said.

“I had all the acceptance documents, all the proper information,” Shadab said. “I was shocked when my visa was denied because U.S. people were (letting) many, many, many people from Afghanistan without having a single document, from the airport. But I had all the documents.”

Attorney Misty Wilson Borkowski, director of Cross, Gunter, Witherspoon & Galchus in Little Rock, who is not affiliated with Shadab’s case, explained that a student visa allows a student to come to the U.S. only for school and then return to their country. Officials will look at financial stability, family roots and other “strong ties” that would ensure they would return.

“The part that can be the most frustrating dealing with the consulate; there is no oversight and there’s no appeal process” if a visa is denied, Borkowski said.

A consulate official can make “snap decisions” without explanation and each denial is recorded, she said. Borkowski has recommended her client’s reapplying “throw everything in, including the kitchen sink” when it comes to documentation.

Calling congressional leadership can help, but “they can’t put their thumb on the scale and make it go one way or the other necessarily,” Borkowski said.

Subiaco’s Dunagan said she was told consulate officials did not bother opening Shadab’s file during his first interview. She contacted U.S. Sen. John Boozman’s office several times and his office was “very gracious about contacting the embassy before his visa interview” the second time. She has not heard back following the second denial.

Boozman spokesman Matthew Wester stated in a Sept. 1 email to Arkansas Catholic: “The office of Sen. Boozman has been working with Subiaco Academy in regards to helping this prospective student with the visa application process. This case is ongoing and our office remains engaged in pursuing a resolution.”

Dunagan said through tears, “I’m terribly worried about him. I’m even more worried about his family. He’s got a mom, dad and little sister. That’s why I cry all the time when talking about it.”

Hope for the future

Shadab is staying in Islamabad with friends of his family for now. He is not a resident of Pakistan, therefore he cannot enroll in school and cannot return to his family in Afghanistan, for fear of the Taliban retaliating. Currently, the borders are closed.

“I am worried about them and disappointed because of the situation. I just can't express my feelings. It's hard to see your family is suffering, and I'm not able to do anything … For a school student, it's too hard to handle these big responsibilities. It is killing me everyday thinking about this all,” Shadab said. “And considering my situation in Pakistan right now, I can’t do anything for them. So it is heartbreaking for me, and it’s hard. I’m just worried and pray and that’s all.”

While his own future is in jeopardy, Shadab is most worried about his 14-year-old sister.

The Taliban has not allowed women to drive, learn English or go to school.

“She's still young and oh God, she is so scared. And I know what she was hoping for in her future. I know that and all of them (girls), it just suddenly got changed,” Shadab said.

“I was hoping for a brighter future in the U.S. For now, there is no plan for me. I lost my motivation,” he said with a sigh.

Shadab said the one thing he hopes Arkansans will do is raise their voice for the people of Afghanistan who cannot.

“They are losing their loved ones every day,” with countless killed by the Taliban, Shadab said. “We are scared. I just want them to -- they have to raise their voice and defend us against the Taliban. That’s all I want.”

While there is no option or plan for Shadab or his family to travel to the United States, he is hopeful that one day they will get here.

“I just hope, and I'm looking forward to that day that we can travel to the U.S. and to continue our normal day and a normal life,” Shadab said. “To study and to work for the future and be a benefit for the people that are living in this world.”