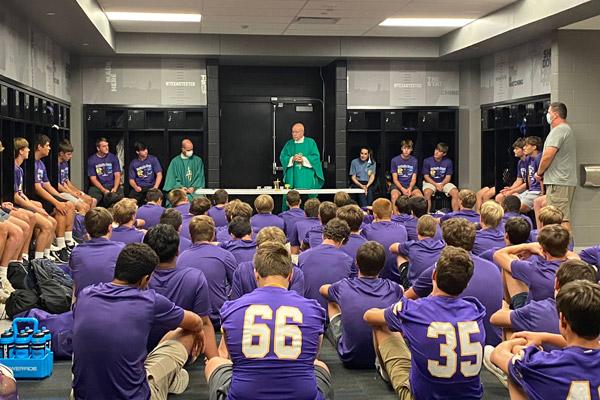 John Fogleman isn’t the kind of guy who is easily intimidated. The soft-spoken coach of the Catholic High football team has been in plenty of big games and, as the Rockets play in the largest and toughest classification in the state, he’s coached against the best Arkansas has to offer, week in and week out.

But talk to him about the team’s experience at the inaugural Catholic Bowl, held Labor Day weekend at The Star, the Dallas Cowboys’ practice complex in Frisco, and his tone approaches something close to wonder.

“It was awesome. The whole weekend couldn’t have turned out much better,” he said. “It was a big deal for the kids to be treated like we were.”

The Rockets were one of four Catholic schools invited to compete in the event and the lone team from outside Texas. But you wouldn’t have known it judging from the representation of fans for the purple and gold which to the naked eye outnumbered their opponents’ fans of Nolan Catholic High School of Fort Worth.

“The organizers of the event couldn’t believe we had so many people come from so far. I know we had a lot of local alumni in the Dallas area come see it, but nonetheless it was impressive.” - Catholic High Football Coach John Fogleman

“The noise and everything just amplifies in The Star, and it created a great setting,” Fogleman said. “We had more people there than the other team. I don’t know what the attendance was, but when I came out for the second half, we came out our door towards our sidelines, and I noticed it was a very good crowd.

“The organizers of the event couldn’t believe we had so many people come from so far. I know we had a lot of local alumni in the Dallas area come see it, but nonetheless it was impressive.”

The level of support wasn’t lost on the team, either. Senior linebacker Ethan Keys said the noise and school spirit were motivating.

“It was incredible to see so many fans there and know they love us that much,” he said. “The team had great energy before the game, and I knew we were going to do well.”

The contest capped off a weekend that included social activities and inspirational speakers, including Pittsburgh Steelers great Rocky Bleier, who also performed the coin toss. A planned Mass for all four teams at a local minor league baseball park was canceled over COVID concerns, but otherwise, the weekend’s events came off without a hitch. On Saturday afternoon, Sept. 4, John Paul II High School of Plano competed against St. Thomas High School in Houston.

Catholic High stumbled out of the gate against Jonesboro 37-7 in its season opener Aug. 27 and going up against a Texas state power like Nolan Catholic had many wondering how the team would fare.

“There are a lot of people who would assume just because we were playing a very good team out of Texas that we didn’t have a chance,” Fogleman said. “Anything can happen when you play together, and I think that’s what we did. We caught them at a good time. They played a big game Week One, and the next week they were flying out to California to play a big-time game out there. So, I’m sure they probably overlooked us a little bit.”

Nolan struck first, scoring in the first and second quarters before senior quarterback Preston Scott stepped up and connected on a 65-yard bomb to fellow senior Fortner Tiffee. The Rockets missed the PAT but hit a 39-yard field goal to reach halftime down just four points. The Rockets then took the lead on a 36-yard strike from Scott to Connor Pruss after the break.

The Texas squad scored the next two touchdowns on the ground before Pruss caught the secondary napping and connected with Sam Sanders for a 62-yard score.

Nolan scored again to put the Rockets down by 11 in the fourth quarter, from which Catholic roared back. A field goal and Scott’s third TD pass of the game, this time a 29-yarder to sophomore running back Dominic Keeton, was capped by a two-point conversion to send the game into overtime. The Rockets’ mojo finally gave out there, losing 36-34 in the third extra period.

Scott ended the night 29 of 46 for 385 yards, three touchdowns and two picks, while Keeton ran the ball 19 times for 45 yards and caught eight balls for 78 yards and a score. Pruss led all Rocket receivers with eight catches for 148 yards and two touchdowns. The defense was paced by junior linebacker Sam Sanders who registered five solo tackles, eight assists and two of the Rockets’ four interceptions.

Fogleman, while disappointed to be on the losing end, had praise for the team’s effort.

“It just goes to show you’re never guaranteed a win, and you’re also not guaranteed that you cannot win,” he said. “Our message all week to them was it isn’t going to happen if you don’t think you can. That whole week, that was our focus to give yourself a chance, and we did.”

Scott, a team captain, summed it up best, saying the team’s Catholic Bowl experience has triggered a noticeable shift in the squad’s attitude and effort.