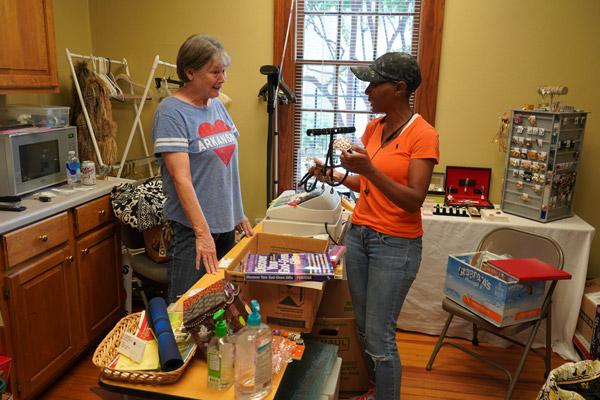 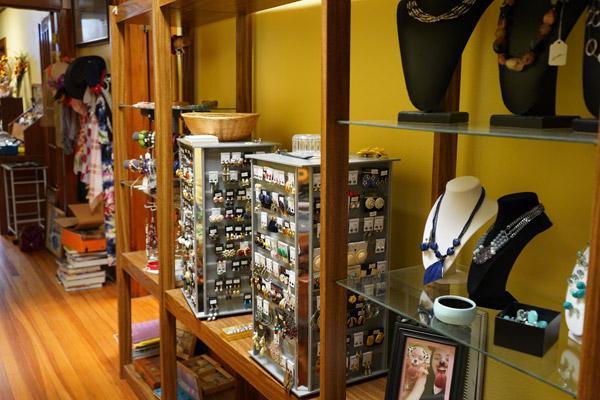 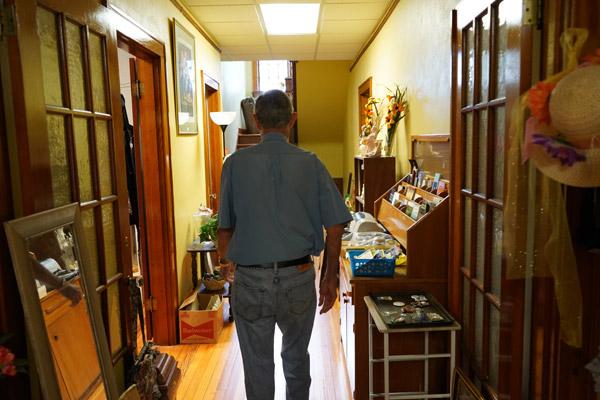 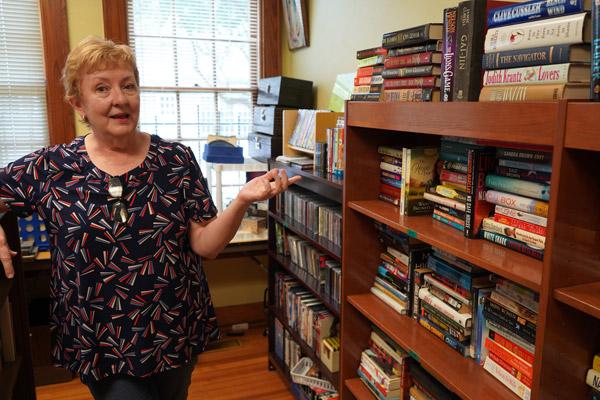 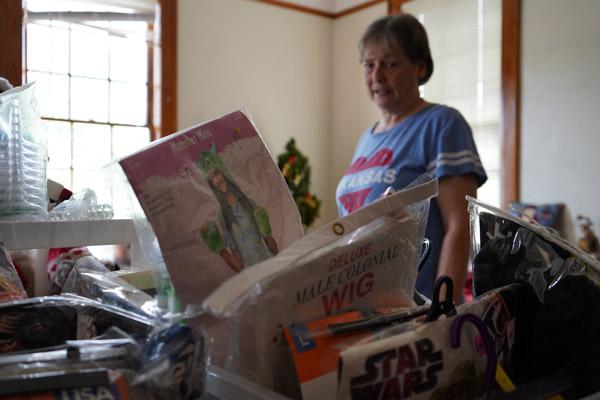 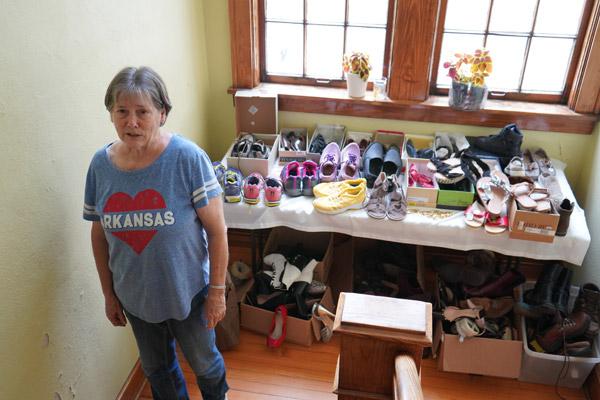 Aprille Hanson Spivey
St. Edward Thrift Store customer Deneen Hill chats with LeAnn Wellinghoff, cofounder of the thrift store, about her purchases before checking out Sept. 13. The store opened in May 2020 and has brought in $41,552 for St. Edward Church in Little Rock.

Aprille Hanson Spivey
St. Edward Thrift Store customer Deneen Hill chats with LeAnn Wellinghoff, cofounder of the thrift store, about her purchases before checking out Sept. 13. The store opened in May 2020 and has brought in $41,552 for St. Edward Church in Little Rock.

Deneen Hill had a stack of books on the table at the St. Edward Thrift Store, along with a handful of Vera Bradley purses ready to go. She's a regular, finding treasures each time she visits.

"I love their books; they have great jewelry," the Maumelle resident said with a smile. "They have everything. One time, I bought a fox coat for my daughter that would have cost $100; I paid $50."

While LeAnn Wellinghoff, cofounder of the thrift store, rang up her purchases, volunteer Vicki Morgan hustled around the various rooms, finding items for Natalie Richardson, a wheelchair-bound customer unable to come up the stairs to the store.

"Do you have a cast-iron skillet?" she asked cofounder and fellow volunteer Donald Goodwin.

While the thrift store has been a financial boost for the Little Rock parish since it opened in May 2020, averaging about $1,000 for the two days they open each week, LeAnn Wellinghoff, cofounder of the thrift store, said it's the people who make it more than just a store.

"She helped me with clothes," Richardson said, adding that she currently lives in an unsafe area. "She listened to me and gave me places" to contact for assistance.

While the thrift store has been a financial boost for the Little Rock parish since it opened in May 2020, averaging about $1,000 for the two days they open each week, Wellinghoff said it's the people who make it more than just a store.

"We have one guy that comes in here, plopped down in the chair the other day, and he was here for his 'therapy session,'" Wellinghoff said. "I said, 'OK, that'll cost you something,' he had three or four items or whatever, and he says, 'If I could just go fishing, it would make everything alright.' So I said, 'OK, what kind of fishing do you do?' and this and that. It just seemed like it made a difference. And we have a bunch of people like that that come in."

"We are a mission of the church. We're not just over here selling people's junk and making money," she added.

The store, open Sundays and Mondays from 10 a.m. to 3 p.m., is housed in the former St. Edward convent and later church administration offices. Morgan said Sisters Hermana Siebenmorgen, OSB, and Barbara Schroeder, OSB, both longtime school leaders who have died, are always on her mind when she walks through the doors.

"I've wondered that myself," of what the sisters would think about the store, she said. "I think they'd be pleased."

Parish manager Scott Sparks said as of Sept. 13, the store has brought in $41,552 for the parish since it opened. This includes money from the annual rummage sale in the summer, the success of which sparked the idea for the store.

The store does purchase some snacks and drinks to sell, and about $2,500 is spent annually on utilities for the building, but all other funds go to the operating budget.

"She's done really well with getting quality items and sales," Sparks said of Wellinghoff, anticipating about $40,000 for the next fiscal year.

The thrift store now fills the three floors of the former convent/office building, with two rooms in the basement, six on the main level and four upstairs. Each is filled with clothes, shoes, knick-knacks, electronics, baby items, holiday decor and everything in between. A room in the former St. Edward School, which closed in May 2019 after 134 years, holds donated furniture and oversized items.

In addition to Wellinghoff and Goodwin, who keep the store running, there are about six regular volunteers. Volunteers also come on Thursdays, typically to sort and accept donations. They take new or "good, clean, usable" used items, she said. They do not accept the old, heavy box TVs or mattresses.

Donations are taken primarily on Thursdays but can be arranged on other days by calling Wellinghoff or the church office. She said they also occasionally pick up donations locally, including about seven pick-up truck-sized loads of fabric and craft materials from a home.

Goodwin, Wellinghoff's brother-in-law, who is not Catholic, has volunteered at St. Edward for about 30 years. He sorts and prices most of the donations.

He said there are thousands of items for sale, adding they've been fortunate to have a cooler, cash register, and shelving donated.

"I just enjoy meeting the people," he said. "You never know what you're going to find opening a bag or box."

While opening a store during the COVID-19 pandemic might seem like strange timing, "People had nothing to do but clean out their attics," Goodwin said. He added people also donated items they'd ordinarily bring to the popular Catholic High School Junktique sale, which was canceled in 2020 and 2021.

Morgan, of Mayflower, said the community around St. Edward has evolved in 20 years.

"We have community members who are low income" and elderly, she said. "This serves a great need."

Because Mass collections were down about 15 percent overall for 2020, Sparks said money from the thrift store has been "a godsend." Some improvement projects that benefited included pouring concrete in the courtyard and repairing or replacing six of the 26 A/C units on the parish grounds.

"It’s helped us survive COVID,” Sparks said. “It’s helped us operate as normal instead of really having to struggle to do the extra things or delay things.”