Cathedral parishioner has seen angels among us 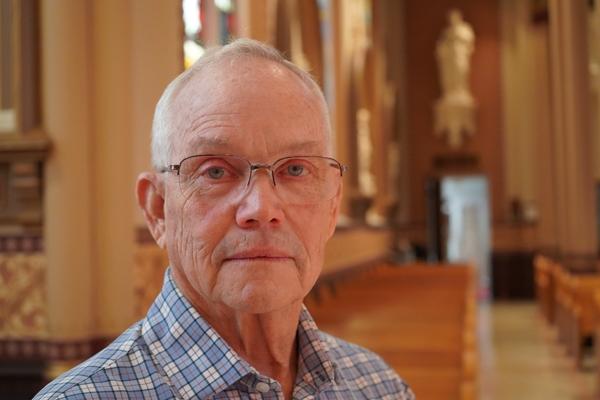 Aprille Hanson Spivey
Michael Jackson, 67, is seen after Mass at the Cathedral of St. Andrew in Little Rock Sept. 29, the feast of the archangels. He had two near-death experiences that changed his life.

Aprille Hanson Spivey
Michael Jackson, 67, is seen after Mass at the Cathedral of St. Andrew in Little Rock Sept. 29, the feast of the archangels. He had two near-death experiences that changed his life.

Cathedral of St. Andrew in Little Rock parishioner Michael Jackson knows angels exist. Beyond faith or a mere feeling, he has experienced the love of Christ and angels, face to face, with two near-death experiences.

"They're definitely there," Jackson said, his voice soft but with conviction, as his eyes teared speaking to Arkansas Catholic following Mass Sept. 29, the feast of the archangels. "I think everybody probably really does have a guardian angel. St. Michael is my patron saint."

The 67-year-old married father of two has been an altar server for daily Mass at the Cathedral for about six years and a knight of the Holy Sepulchre for 11 years. He prays daily to St. Michael the Archangel, who has been by his side in ways he never expected.

Born and raised in Morrilton, Jackson is a cradle Catholic who grew up attending Sacred Heart Church.

A man of science and faith, he spent 47 years as an operating room and critical care nurse, including in the U.S. Navy. Lost causes were his specialty.

"I had a number of patients, people would give up on them and want to withdraw care, and I would always refuse. I never gave up," Jackson said.

After a long battle with heart disease that resulted in dozens of procedures and more than 60 stents, Jackson would soon be that kind of patient.

"With my first angioplasty, I had a near-death experience" in 1991, Jackson said.

While stories of near-death experiences line the shelves of bookstores or pop up in a Google search today, Jackson said at the time he shared his story with only the people closest to him.

"I researched it. Back then, you couldn't talk about it, period. People would think we're crazy," he said.

During his procedure, Jackson began having severe pain. The doctor urged him to be still.

"He said, 'Well, if you don't be still, you're going to be dead. The catheter is stuck'" in the valve, Jackson said. "The next thing I knew, I was above my operating table looking down, and the doctor was yelling at the nurse because she didn't have the right size catheter."

"From there, suddenly there was an angel with me, going up. It was beautiful. There is an aroma that I still smell; I usually have experienced it" during the consecration at Mass or during extreme physical suffering, Jackson said, pausing to hold back tears. He's tried to identify the fragrance, smelling flowers and various scents, but it cannot be replicated.

The angel at his side, Jackson said, was winged and "massive.”

“Very beautiful. His eyes were different than those of Christ. I always assumed it was Michael because it's Michael that will transport you, present you before God when we die," he said.

In heaven, he was told there were people he was supposed to see, including his mother and a great uncle he had never met. Jackson admits it is hard to perfectly describe what he saw, as nothing on earth compares.

"I was finally told, 'You have to go back' after being there. I said, 'Why can't I stay?' 'It's not your time. You will know when your time is coming,'" Jackson said.

Jackson continued with his life, becoming a member of the Cathedral in 1995. He battled melanoma twice, and while going through treatment in 2013, he saw a vision of St. Michael behind him, with the numbers "12 14" appearing on Jackson's forehead. Working on New Year's Eve 2013 at UAMS in Little Rock, Jackson showed a trainee how to get vitals off the EKG monitor and used himself as the guinea pig. He was having chest pains and the monitor showed blockages in every major artery. He was kept for observation.

In the years after, there was nothing more that could be done to save his heart. He would need a transplant. "The only thing that was on my schedule is daily Mass because I didn't have a future to go to," Jackson said. "I could die any day."

There were times the pain became so severe, he would leave to throw up during Mass but come back to the altar.

"All we have to do is make it to the consecration," he told himself.

Too weak to continue, Jackson served at his final Mass Sept. 29, 2019, the feast of Sts. Michael, Gabriel and Raphael.

The next month, Oct. 25, 2019, Jackson was told he'd be receiving a heart transplant in Missouri. But once again, things didn't go as planned. He could not be awakened after the surgery because of the stress on the heart.

"I was at the point of death," Jackson said. "So Father (Jack) Vu (former rector) called a group of people here at the Cathedral. They consecrated the precious blood and drove it to Kansas City," at St. Luke Hospital Oct. 31.

"I’m with Jesus. He’s just as bright as the sun,” he said with a long pause. “Then there is this voice, ‘Michael, this is Father Jack, open your eyes.’” When the blood of Christ was placed on his lips, he woke up.

“In four hours, I was off everything,” Jackson said.

Citing the 2010 book “Heaven is For Real,” about a young boy’s near-death experience, Jackson said the only image he has seen that looks like Christ is the same one the boy has said was him, painted by a young girl in Ukraine.

“When you look into the face of Christ, you don’t look at anything else,” Jackson said. “It’s the eyes more than anything.”

Jackson, who hopes to write a book about his experiences, has been acclimating to his new heart, which he nicknamed Boudreaux, as it came from Louisiana. Even with all the uncertainty in the world, particularly in the past few years, Jackson said he is at peace.

“I have no fear,” Jackson said. “I know that God's always with me.”

Click for the All night, all day, angels are watching over us index