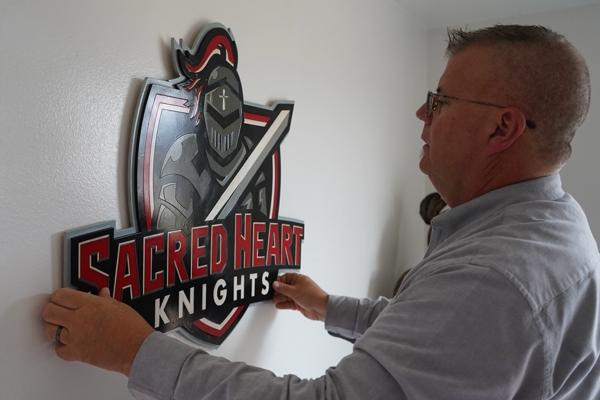 Aprille Hanson Spivey
Dean McKendree, dean of students and high school science instructor, hangs a sign outside the gym made and donated by an alumna that displays the new Sacred Heart School mascot Oct. 28. McKendree designed the new logo for the Morrilton school.

Aprille Hanson Spivey
Dean McKendree, dean of students and high school science instructor, hangs a sign outside the gym made and donated by an alumna that displays the new Sacred Heart School mascot Oct. 28. McKendree designed the new logo for the Morrilton school.

For the fourth time in the school’s history, Sacred Heart School in Morrilton unveiled its newest mascot.

The official announcement came in February, but the idea to change the team name from the Rebels has been discussed for the past 16 years.

“The decision to select a new school mascot enables our school to more fully celebrate our school spirit. Ultimately, we believe that Knights embodies characteristics that we want to build in our students as they go out into the world, protected and fortified by the armor of God.”

This fall, students began sporting Knights on athletic gear, and signage is continuing to be installed in the school and gym.

“At Sacred Heart, we want all to feel welcome in our school, as we do in our Catholic Church. In all honesty, we have not had a true mascot in many years,” said Alisha Koonce, director of development for Sacred Heart School. “The decision to select a new school mascot enables our school to more fully celebrate our school spirit. Ultimately, we believe that Knights embodies characteristics that we want to build in our students as they go out into the world, protected and fortified by the armor of God.”

In early 2021, a handful of students, parents, alumni and parishioners were chosen as part of a task force to deliberate on new mascot options, guided by marketing agency Nicholson Group in Russellville. Noah Koch, 18, who graduated from Sacred Heart School in May, was the student representative on the committee. They began with about 23 mascot options and whittled them down to a top three: Knights, Cardinals and The Express, an ode to the city’s railroad.

A survey was sent out to students, alumni and parents who overwhelmingly picked the Knights. Dean McKendree, in his first year as dean of students and high school science instructor, designed the logo for free. The 30-year military veteran said he and his wife, Casey McKendree, Sacred Heart kindergarten teacher, own a T-shirt business. He offered 16 drawings of a knight, and the one chosen was customized by the Nicholson Group for certain sports and activities. The feathering on the helmet is unique to each grade -- with one feather for elementary students, another for junior high and a third added for high schoolers.

“I want to be a part of anything that glorifies my Savior Christ,” McKendree said. “I just love it here.”

“I think it’s been mixed,” Koonce said to the reaction from parents and students. “There are many families who have a connection to Rebels in only positive ways, and they don’t embrace any negative connotations with it; it’s just part of their heritage at Sacred Heart. But collectively, we had to look at what was best for Sacred Heart School,” Koonce said, adding the overall reaction has been supportive. “There were definitely some that just felt like it was time ... We want to be known for being very open to people from all different backgrounds and for that not to be a reason someone would not consider Sacred Heart.”

Every student and faculty member received a complimentary Knights T-shirt. Students are not allowed to wear any Rebel gear to class or games, as stated in the school handbook.

Koch, now a freshman at the University of Arkansas, attended Sacred Heart from sixth grade until his graduation. He said the change needed to happen, as people in his generation have been made more aware of the sins of the past and how they are portrayed today.

“The Knights mascot brings more unity and more inclusion to certain people,” Koch said. “Whenever people hear Rebels, and it’s associated with the South, they think, ‘Oh, Civil War.’ We didn’t want that sticking around.”

Msgr. Harris said the timing of the change was appropriate, given the official launch of Pope Francis’ “Synod on Synodality,” which will be a two-year process of the Church, from dioceses to the faith on a global scale, to hold listening sessions with people who are marginalized in the Church.

“I don’t know where that’s going to go, but I like the idea that we’re attempting to hear from people that we haven’t heard from in the past. Those that are excluded,” he said, which can include people of various races, those in the LGBTQ community, the divorced and remarried and the youth. “All of those little components that make up a parish. They’re all there, at least most of them are, some of them silently there. They’re anonymous. This is an opportunity to at least go define them, then see if we can bring them in. I hope this (the new mascot) might assist with that a little bit.”