A variety of handmade soaps in 12 scents allow monks to generate income in store, online 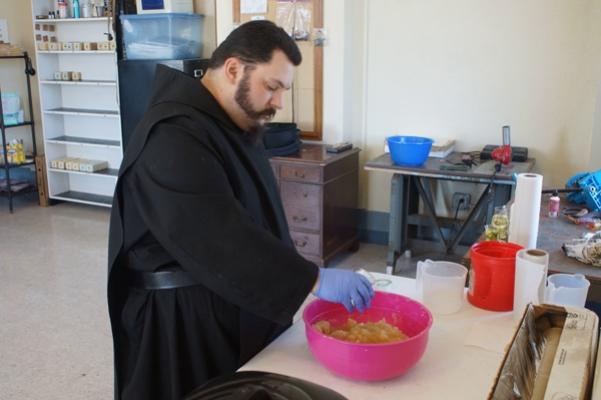 courtesy Subiaco Abbey
Brother André Bedore, OSB, mixes melted oils, water and lye to create soap which is sold to generate income for Subiaco Abbey. This year, more than 1,200 bars have been purchased.

courtesy Subiaco Abbey
Brother André Bedore, OSB, mixes melted oils, water and lye to create soap which is sold to generate income for Subiaco Abbey. This year, more than 1,200 bars have been purchased.

During the holiday season, Brother André Bedore, OSB, of Subiaco Abbey spends hours a week melting oils, blending lye mixture and pouring the concoction into molds to create a perfectly blended bar of soap with just the right hint of fragrance.

“This is the time when people are shopping and buying their Christmas presents and stuff, so I’ve been making a lot more recently than previously,” Brother André said.

For at least five years, Subiaco Abbey has made and sold handmade bars of soap through its Coury House gift shop and within the past two years online at countrymonks.biz/soaps.

“Personally, my favorite, I think, is lilac. It reminds me of home; I like the scent. My parents have a bunch of lilac trees in the yard,” he said of his family’s home in Tupper Lake in the Adirondack Mountains of northern New York.

The idea he’d be making soap one day “was a complete surprise,” but the draw to monastic life grew over time. He admitted some people thought he would make “a good monk” but assumed he was called to married life.

“As I got older in my 20s, I desired to get married less and less. I was in a job, I liked my job, but it wasn’t very satisfying, and I thought, ‘Well, I’m 30 years old. I need to have a good idea of what direction my life is going,’” he said.

He began “getting closer to God and trying to discern God’s will for me and what he wanted me to do. Before that, I really wasn’t open to religious life.”

Brother André, 36, found out about Subiaco Abbey online and visited for the first time in February 2018. He made his first profession Sept. 8, 2019, and will make his final profession next year. He chose his name for St. Brother André Bessette, given his French Canadian background.

Brother André was asked to train under a fellow monk who was the primary soap-maker before taking over.

“I was thinking, ‘I can’t make soap. I don’t know how to make soap.’ But he was pretty good at teaching me how to do it,” Brother André said.

The process can take about four to five hours, which starts with melting the oils around 9:30 a.m. Water and lye mix are added, and a stick is used to blend the mixture, giving it a pudding-like texture. It’s cooked for about an hour in a toaster oven, and then the fragrance is added.

Brother André pours it into the molds and cuts it into bars about two to three days later.

“I think it has to do with cooking it,” he said is his favorite part of the whole process. “You watch the oils transform from melted oils, and you add the lye solution, and you watch the solidification process. It’s pretty cool to watch the soap transform to what it ends up being. The end product looks like a Vaseline kind of texture, or like mashed potatoes” before it sits in the mold.

He said the bars, at least 5 oz., last about six months. He typically makes a double batch at a time, yielding 72 bars.

“Those all have good properties in terms of what they do with your skin,” he said.

He also adds lemon essential oil into the bars.

“I use it as hand soap every day, and it’s definitely making the skin on my hands a lot shinier.”

Each bar is $9, and discounts are available during holiday shopping, including 10 percent off on purchases of three or more candles, soaps or ornaments.