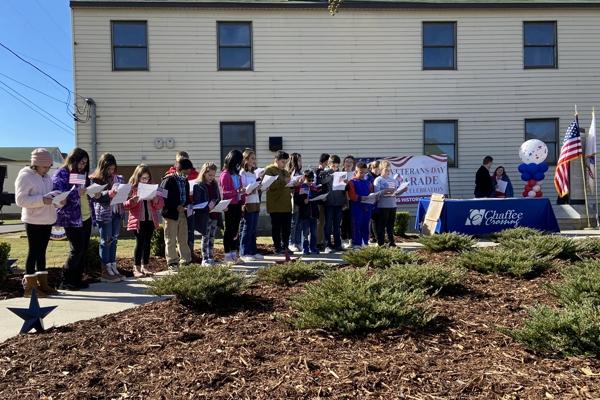 Christ the King School earned a designation no other school in Fort Smith or any Catholic school in the state can claim.

It was designated a Purple Star School Nov. 18 by the Arkansas State Council of the Military Interstate Children’s Compact Commission. The recognition is a way to honor schools that put a priority on helping children in military families.

“We moved here from South Dakota four years ago and immediately registered our children at Christ the King School,” Simpson said. “Our oldest is now in seventh grade at Trinity Catholic School, and we have a fifth grader and two preschoolers at Christ the King. While we had never found a school that was so welcoming, I knew about the special challenges military families have and was happy and excited to bring this program to our school.

“Some kids are more resilient, and some aren’t. Moving around a lot can affect learning. Sometimes they will need a little extra help with school, socializing or emotions, and it’s nice to be able to give them those resources and be aware."

“We recently had a student whose dad just came home from a deployment. I made sure the teacher knew and had whatever resources she needed to help the student. I also reached out to the mom.”

Simpson’s older two children have moved four times, and her husband was deployed several times during his early years with the Air National Guard.

“Some kids are more resilient, and some aren’t,” she said. “Moving around a lot can affect learning. Sometimes they will need a little extra help with school, socializing or emotions, and it’s nice to be able to give them those resources and be aware.

“When a new family comes in, I welcome them,” Simpson said. “I talk to parents, ask if there is anything I can do to help, reach out and make sure everything is going smoothly.”

Ebbing Air National Guard Base in Fort Smith recently was named the future location of an international pilot training center supporting F-16 and F-35 fighter planes. More than 345 military personnel will be moving to Fort Smith with about 300 dependents, along with more than 180 members of a Singapore military unit.

“We have 13 children at Christ the King whose parents are in the military now, but we expect that number to increase,” Katie Kratzberg, development director, said. “We also have students whose parents are veterans.”

Principal Myndi Keyton said Christ the King has a needs-based financial assistance program for which military and non-military families can apply. They are a Reform Alliance school, and Arkansas’ Succeed Scholarship Program designated for children with special needs has been expanded to include military children. Succeed scholarships cover 100 percent of tuition for approved applicants.

Christ the King designates one day of Kindness Week to reach out to veterans. This year students wrote thank you notes to military members deployed overseas. On Veterans Day, the school had a special assembly where members of the Veterans of Foreign Wars talked about their personal experiences in the military. Students made cards for veterans and brought them to the Veterans Administration.

“This year, the Fort Smith Museum of History made a float for veterans and asked our students to make posters to decorate the inside of the float,” Keyton said. “Our students went to Fort Chaffee for the Veterans Day Parade and sang songs during the festival.”

“That way, Fort Smith Catholic Schools will be a Purple Star District,” she said. “I have talked to Immaculate Conception’s librarian, who is also a military spouse, and I think that both schools might be interested.”