After converting to Catholicism, she became mainstay at parishes in Wynne and McCrory 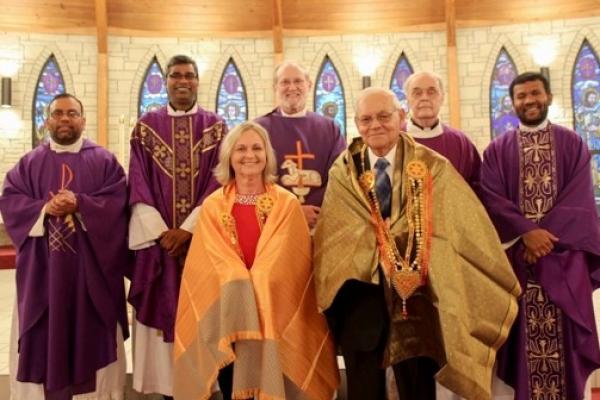 When Louise Hess converted to Catholicism in 1979 after three years of marriage to her husband Leon, she admits, “I never knew I’d be actually working for the Church.”

In 1989, she began working part-time at the St. Peter Church office in Wynne and St. Mary Church in McCrory, asked by the late pastor Father Aime Lacasse to help type up the bulletin and office tasks.

“It very quickly became full-time” and a career, Hess said.

On Dec. 5, the five living pastors she served as parish secretary/administrative assistant for 32 years came to St. Peter to celebrate Hess’ following her retirement from both parishes in October.

By her calculations, she was there through 320 baptisms, 100 weddings, 275 First Communions, 240 confirmations, about 144 funerals, 11,000 Masses and three different popes and bishops.

“Oh my gosh, it was just so beautiful,” Hess, 64, said of the afternoon Mass.

Her daughters lectored, her grandchildren brought up the gifts, and her 89-year-old mother also attended.

“I’ve been to a lot of Masses, but having all five of the priests there, it was beautiful. … Father Tom Marks said at the Mass it was a miracle to have five priests at a Sunday afternoon Mass.”

Growing up in Cross County, Hess was raised in the Assembly of God Church. The Hesses have three daughters, two nephews who they raised as sons and 10 grandchildren.

Before starting her career at St. Peter and St. Mary, she and her husband owned a flower shop, and she worked as a legal secretary but took time off to raise her children. Her friend Kay Hylle suggested she might be the right fit to work at the church, and Father Lacasse reached out.

After Hess was hired, “we began to build a new church. My responsibilities grew, and I was doing all the finances to pay for the new church, setting up the pledges from people,” Hess said, adding, “I kind of grew there with the church.”

By her calculations, she was there through 320 baptisms, 100 weddings, 275 First Communions, 240 confirmations, about 144 funerals, 11,000 Masses and three different popes and bishops. About 200 people attended weekend Masses, but it’s down to about 100 now.

“I would say I am very organized. I am a very detailed person. If we had an event, I would make sure every detail, even the smallest details, during a Mass or funeral or a Christmas Mass like when to turn the lights on, when do they ring the bells, it has to be relayed to all your volunteers. That was one of my strengths — making sure everything fell into place so the priest wouldn’t have to worry about it,” she said.

Hess was also available 24/7 to answer her phone in an emergency.

“I was always on call. I’d run into somebody in Walmart even (and they’d say) ‘Will you put so and so on the sick list?’ In a small town, everybody knows you. People knew they could always call me from home even after hours,” Hess said.

A great joy was spending about 10 years as the PRE and confirmation class director.

“It’s something that you really don’t see by just going to Mass every Sunday, but getting to know the children, I was always just amazed by their faith,” Hess said, pointing to a highlight  when native son Father Stephen Gadberry was ordained a deacon in his home parish.

“I saw him grow up from a small child, and that was a very wonderful moment in the church's history there too.”

Hess explained that she learned something valuable from each of the five living pastors she served under: A sense of humor from Father Tom Marks (1992-2003); spirituality and jolliness from Father Ed Graves (2003-2011); a strong dedication to being there for people in need from Father Arokiasamy “Samy” Madhichettyirudayaraj (2011-2017); a smile, consistency and joy from Father Balaraju Desam (2017-2020); and persevering through tough circumstances, like the COVID-19 pandemic, from Father Alfhones Perikala (2020-present).

Father Desam was the celebrant for the Dec. 5 Mass honoring Hess. He and fellow Indian priests wrapped Louise and Leon Hess in a traditional shawl and sandalwood lace garland to signify honor and appreciation.

Now serving in Conwy and Greenbrier, Father Desam said Hess had a strong commitment, even working on her days off.

“She helped me a lot; she used to advise me a lot. Being 32-plus years, she has more experience than me. I learned a lot from her with the dedication and patience she has,” Father Desam said.

Hess’ faith was always first in her work. If she was stressed, Father Desam said she’d sit in front of the Blessed Sacrament and come back recharged. If someone called regarding an illness or death, “immediately she would ask (that we) pray for them” and would go light a candle for them.

Hess moved with her husband to their lake house near Heber Springs in September 2020, working from home and making the one-hour and 45 minute-commute part of the week.

“The people. They’re all my family,” she said of what she misses most. “The ones that are my age, we all got married at the same time, we all watched each other’s children grow up, and now our children have children. I feel like I’ve had a connection not only with the people my age, my peers, but their children and their children.”