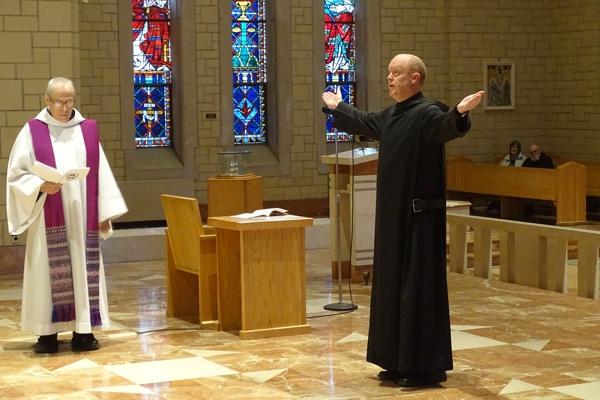 In his first three years of his life spent near Madrid, Spain, while his father served in the U.S. Air Force, John Fryer observed the life of the local priest  — he’d celebrate Mass, listen and talk to people and go back to his residence. It seemed like the perfect gig.

“It was there that I informed my parents that I wanted to become a priest. I didn't use those words, but that was my first thought of giving my life to God. Of course, I had no idea what that entailed,” he said.

The prophecy of his toddler self sort of came true, in that he will live a life dedicated to God as a monk at Subiaco Abbey. Now known as Brother Ambrose, the 49-year-old made his solemn profession Dec. 21 and may study for the priesthood.

“I think the reality of totally giving and dedicating my life to God and this community really sank in while under the pall, while listening to the prayer of consecration and the litany of the saints,” he said.

“When it comes to God communicating to me I’m not a Prophet Elijah. I'm not very good at listening to the small whispering voice, I'm working on that. God usually has to slap me upside the head to make a change or toward making a change.”

Even though he has always felt a religious calling, he made some unexpected turns to get to that moment.

Born in Texas, the military family also lived in Michigan and Alexandria, La.

“Overall, I was pretty quiet. I was a helper, I was a teacher’s pet. I was teased and made fun of growing up from time to time. I just sort of blended into the wall,” Brother Ambrose said, adding he had a core group of friends, but between his eighth and 10th grade years, it was tough for him. “Sometimes I would ask why to God because I still felt called to the priesthood and a lot of people were aware of that, but when I was made fun of, I'd do my best to, ‘water off a duck's back’ is the term, but it caused me to withdraw a little bit more into myself. But externally no one would have noticed anything.”

While his family was always faithful, he missed Mass some during that time and struggled with laziness but also the direction God wanted him to go.

“I hadn’t reached that trust level,” he said, throwing a bit of a “temper tantrum to God.”

“After my seventh year of studies, third year of theology, I thought of myself as being too young” to become a priest, he said. “The bishop and I talked and worked out a few things, and he recommended I take some time off and go into teaching.”

His “time off” turned into 20-plus years of teaching students from sixth grade to freshmen in college. Brother Ambrose primarily focused on morality, Church history, social justice and all the topics of religion. And he was making a real impact on his students. Following a baccalaureate Mass at his alma mater Holy Savior, where he worked for many years, Brother Ambrose spoke to a father whose three children had him as a teacher. He told him, “I know you wanted to become a priest, but I think you have affected more lives being in a classroom than behind a pulpit.”

For a time, Brother Ambrose believed that was enough. However, in his final year and half of teaching at his alma mater, a lack of peace began to grow. He was calling in sick and not as invested as he once had been.

“When it comes to God communicating to me I’m not a Prophet Elijah. I'm not very good at listening to the small whispering voice, I'm working on that. God usually has to slap me upside the head to make a change or toward making a change,” he admitted.

That change, though heartbreaking, meant walking away from his career and a bachelor’s life and returning to St. Joseph Abbey. As with most monasteries, they suggested Brother Ambrose explore other religious communities to make sure they were the right fit. Subiaco Abbey was intriguing with its casual, yet prayerful lifestyle and variety of ministries.

Brother Ambrose entered in 2017 and made his first profession Feb. 2, 2019. He was granted the name Ambrose for the late Father Ambrose Wathen, OSB, rector of St. Joseph Seminary.

“I think both in looking at the value of human life and the value of human sexuality I think those are two topics obviously our world doesn’t get anywhere close to correct,” he said of what topics he enjoys teaching the most. “I always challenge the students to think. To go beyond whatever their parents said to make their faith their own.”

While he admits he still has that “new monk smell,” Brother Ambrose is looking forward to embracing work, prayer and becoming more meditative and relying on God to help him.

“‘God never promises us sunshine and skittles, but he will give us a peace we can’t really explain,’” he said, wisdom he often shares with his students. “Even in our worst days, that peace can still be there.”