Returning to full color: My story of self-acceptance 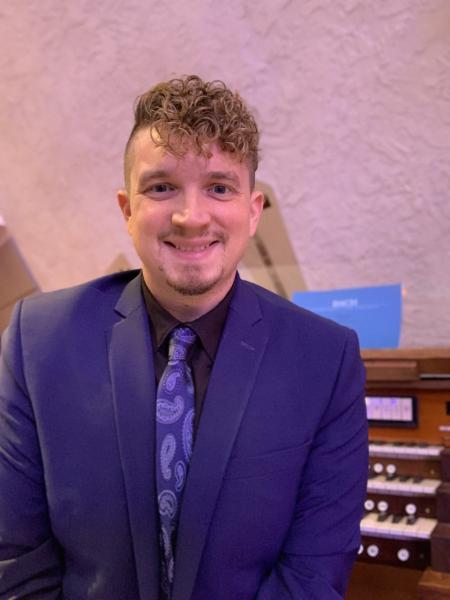 Skye Hart grew up in Arkansas. He now serves the Church as a music director in Arizona.

Skye Hart grew up in Arkansas. He now serves the Church as a music director in Arizona.

Editor’s note: The following is a 2020 essay written by Skye Hart, formerly of Arkansas. He works as a music director in a Catholic parish in Arizona. Hart was interviewed by Arkansas Catholic for part 3 of the Synod on Synodality series.

I love bright colors. I’ve always been drawn to them. I remember shopping with mom at the drug store and seeing Crayola fluorescent-colored crayons. I was in love.

I adored fantasy tales and imagination. My favorite show as a kid was about a department store mannequin who came to life each night after the store closed. I couldn't put down the “Oz” series once I started reading them.

When I was 5, I asked for a tea set. Boys aren’t supposed to want them for some reason, but I did, and I got one. I also had “boy” things, like construction sets and He-man, and I liked them. But I also wanted to have tea parties with my favorite toys: a glow-worm I named “Pepsi,” a handmade rabbit named “Mary Lou” and my Raggedy Andy.

Sports did not attract me very much, though I enjoyed playing outside. I was in gymnastics for a year and liked it, but we didn’t continue for whatever reason. Soccer was fun, though looking back, I think it was mostly because of a Columbian kid named Edgar, who was sweet and taught me how to play. I felt nice whenever I was around him.

I don’t think I felt self-aware or a conscious feeling of being “different” until around third grade. Catholic school is a rough place if you’re a sensitive kid, and mine took no prisoners. Unlike some people, I liked the nuns. They were strict but kind and good teachers, and I learned a lot from them.

The kids, on the other hand — the bullying got bad enough that I dreaded recess — which for us was usually going to the parking lot across from the school. Kids made little jingles about my name and poked fun at me for being chubby. There was one kid who would hang out with me, but he didn’t want to become guilty by association, so he clarified that we were “half friends.” Years later, I found out that he was gay, too. It’s too bad we couldn’t have been more than half friends. Maybe he was just as scared as I was.

Getting pulled out of school at sixth grade to homeschool was a relief in that I didn’t have to see all of those awful kids again. The world of religion became a comfortable place where being counter-cultural was encouraged, and I could frame my feelings differently as a higher calling. It took over our lives, and there was rarely a day that wasn’t spent at a church or praying or acting as a saintly medium for mom.

I didn’t have to worry about dating — it was never asked; it was assumed that I would be a priest or a monk and spend my life in devotion to the Church. My mother wanted nothing more than a priest in the family who would be her direct hotline to God whenever she needed it. So, when I was finally accepted to seminary, I was taken aback by the feeling of dread that consumed me. This is what I always wanted, right? So, why does it feel so wrong? Or is it not what I want but what I think other people want me to do? As it turns out, all I ever wanted was to be happy and be free.

Even now, I don’t always know what that looks like. But if I live my life “as if” I’m already at this place, the pieces come together almost seamlessly. I wish I could go back and tell the younger version of myself.

I struggled to accept who I was because I never saw what it looked like to live in self-acceptance. I mean, you can never be good enough, right? Something is always lacking, amiss. All the adults around me were certainly unhappy with themselves. I figured this was just part of life. That’s how it seemed for so many years when I looked in the mirror. I saw someone I knew intimately, but not someone I cared for.

These feelings came to a head in college. I found myself falling for guys, which was reviled in my religious circles. And, of course, these guys were totally unavailable for all sorts of reasons. And this feeling shattered me, as I felt torn between two worlds and disconnected from both. When I think back on it, I am instantly transported to that place.

The memories flood back in torrents. There I am, sitting at the library fountain, alone, crying and desperately wanting to be loved. But I didn’t love myself, and that was the barrier that kept me from connecting with anyone else for years to come. I was afraid of people finding out my secret of who I loved, but I was even more afraid of living.

I tried to solve this by swallowing a bottle of NyQuil pills. I didn’t do any research; I just hoped it would take me away from everything. I’m grateful today that I’m not good at suicide. It gave me a bitter taste in my mouth and a queasy stomach, but that was it. As I sat in my usual spot in the library, I realized that I was not meant to die but still had a full life ahead of me. It was like the universe said, “You’ve got another chance, kid.”

As I felt increasingly at odds with my religious values and how I thought and felt about things, I slowly warmed up to people. A cheerful and energetic student, who was openly gay and seemingly loved by all, listened to me and made me feel safe enough to come out to her. I was sure that there were only two to three gay people at the small school where I was at. But in time, more people came out, including a few who surprised me. It was encouraging but still frightening.

I would covertly attend Gay-Straight-Alliance meetings when it was first established. After one such meeting, I had to run across campus for the Catholic Campus meeting led by the professor I lived with. “The Passion of the Christ!” Talk about worlds colliding! However, secrets caught up with me, and eventually, I found myself without a place to live just before finals. Thanks to some incredibly kind and wise teachers, I got through that and finished the semester. I don’t know what I would have done without them. I felt so very alone.

It was tough never really being accepted by my parents. I was basically forced out by my mother when I was home on break from school. A glossy card arrived in the mail with the image of a tearful madonna and the words, “Our Lady of Fatima wants you to help save America’s families.” It then provided the senator’s number and instructions to call him to vote for the marriage amendment, which would define marriage as exclusively heterosexual.

“Now you need to make sure you call the senator, or else anybody can be married. People will marry trees; fathers will marry daughters,” mom declared.

I smiled and nodded and pretended to forget about it for a few days. Finally, mom pressed me, “why haven’t you called the senator?”

This led to many hours of interrogation and finally me admitting that I didn’t want to call — because I am gay. I thought maybe we had made some headway as we talked through it. She recalled some things from that past that I did that seemed “kind of gay,” and I went to bed that night numb, exhausted and hoping for a good outcome.

By morning, however, mom had all night to think about it and was in full out insanity mode. “We’re going to church, and you need to talk to the priest.”

The priest had just been assigned to the parish, and I’m sure he was still adjusting to life in Arkansas compared with Nigeria. As we sat in the front pew to talk, my mind went blank. I had nothing to say. I didn’t want to be there, and I was filled with resentment for being coerced. The priest was nice enough, told me to make sure I pray the rosary, etc. Things one might expect a priest to say to a visibly upset young man.

The following week, I was dropped off at a Trappist Abbey in the middle of nowhere for a “retreat.” While I braced myself to get messages of disapproval from on high, I ended up chatting with several kindly retreatants. One was a lovely nun from the Philippines. Despite wearing a habit and appearing “traditional,” I was floored when she encouraged me to live my life and be happy. What? Me? Happy? Is that even on the table?

Years later, I’m finally beginning to see what that nun meant. Maybe it was true that all God wanted was my happiness. The other details would work themselves out. The subconscious messages that we learn as children form so much of how we live our lives in adulthood. I’m finally connecting with the kid who loved bright colors and wild stories and going on adventures. The kid who took to music like a fish to water and wasn’t afraid of making new friends. Is this what it feels like … to be free?

After spending years fearing rejection, I’ve come to the conclusion that life is too short to live someone else’s reality. I still struggle with fitting in. Even though I played the role of a female as my mom’s medium for many years, I feel a strong masculine identity as an adult. One that’s strong enough to allow me to play, create, feel and not be weighed down by what someone else might think I should do. What other people think of me is simply none of my business.

Will I find love someday? I think so. After years of denial and repression, numbing reality away with booze and dissociating whenever I was at work, I can finally just be me. I will live my identity on my own terms. I don’t have to find a “tribe” or gay subculture to give me a sense of belonging. I belong to myself and anyone who dares to love me.

I am good enough — and you are, too — to tell my story in bold colors. Hues of golden sun, rose clouds, purple flowers, black nightfall and silver stars. My eyes sparkle with joy at the sight of it all.