Cathedral stenciling a wonder to behold 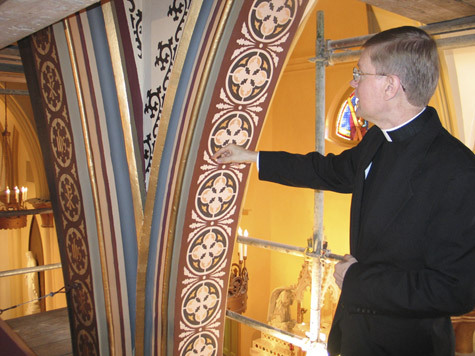 Tara Little
Standing near the top of a chancel arch, Msgr. Scott Marczuk describes the quatrefoil flower stenciling. The transept arch design (to left) has Christological symbols because it is near the altar. Between the arches, crocket stenciling, which forms hooks and symbolizes a bishop's staff, can be seen above windows and arches in the front part of the church.

Tara Little
Standing near the top of a chancel arch, Msgr. Scott Marczuk describes the quatrefoil flower stenciling. The transept arch design (to left) has Christological symbols because it is near the altar. Between the arches, crocket stenciling, which forms hooks and symbolizes a bishop's staff, can be seen above windows and arches in the front part of the church.

For anyone who hasn't seen the inside of the Cathedral of St. Andrew lately, a "marvelous" surprise awaits. The interior walls, arches and columns, previously plain and unadorned, are now alive with color through decorative stenciling that highlights the Gothic revival-style church.

The stencils recall the church's original look in the early 1900s.

Three distinct, yet related horizontal stenciling bands line the walls of the central body of the church, or nave, and of the cross-shaped area intersecting the nave and sanctuary, called the transept. The inner arches, supported by columns, are topped with similar horizontal elements, including a new wooden molding. Two additional bands on all the columns add to the design effect, which is to draw the eye forward to the altar.

A major theme in the overall stenciling design is the use of quatrefoils (composed of four lobes or loops) in the form of crosses and flowers, which comes from the marble back altar in the sanctuary.

Highlights include the band above the wainscot paneling and the band mid-way up the wall that connects the stained glass windows. Both designs draw from the large transept windows illustrating the holy family. The waist-level band incorporates the windows' geometric and foliage designs, while the upper band incorporates the lilies and roses.

Crocket stenciling, which forms a hook and symbolizes a bishop's crosier or staff, runs around the top of the stained glass windows and some of the arches. This design was inspired by the crockets that go up the steeple on the back altar.

A pallet of earth-toned colors, including terra cotta, beige, olive, dark tan, off-black, gray and metallic gold were matched exactly to what was used in the original stenciling and serve to accentuate the colors found in the back altar.

The cathedral stenciling work was part of a larger project to repair water-damaged plaster walls in the nave and transept, and to correct any improper repairs on walls and surfaces that had been made over the years.

The eight-month project, which was completed Dec. 15, cost $568,000 and was a continuation of the parish's $2 million restoration effort that began in 2002.

The church's original slate roof, which was replaced in 2003, leaked causing the majority of the water damage to the plaster walls. After the interior sanctuary wall was repaired in 2004, the focus shifted to the nave and transept walls, columns and arches.

With the 125-year-old building being on the National Registry of Historic Places, in addition to being the mother church for the Diocese of Little Rock, the decision was made to preserve or revive the Neo-Gothic design wherever possible. In many cases, like with the stenciling project, it was a restoration of what was originally in the church rather than adding something new.

"We tried to be as authentic as we could," Msgr. Scott Marczuk, cathedral rector, said of the stenciling. "Certain places I know are exactly reproduced from the photographs."

Recovery of the stenciling was difficult however, since little by little, the original stenciling was covered up in remodeling projects over the years. Msgr. Marczuk said by the mid-1970s the last of the wall stenciling was lost under paint.

The process to uncover and restore the stenciling began in 2001 when Msgr. Marczuk asked professional artist and preservationist Becky Witsell, of Studio Werk in Little Rock, to review historic photographs of the cathedral interior and give a report on what might be involved in the restoration. Witsell and her staff also did the 2002 restoration at St. Edward Church in Little Rock.

When the sanctuary wall repair began in 2004, Witsell started her exploration. She carefully chipped away paint layers, only large enough to uncover a pattern, and collected samples to be analyzed in a lab for accurate color matching.

Eventually, Witsell said, 160 paint samples the size of thumbnails were collected from all over the church where stenciling would have been.

She estimated that six or seven layers of paint had been added to the walls since the cathedral was built. Wherever possible, original stenciling designs were traced and made into stencil patterns to be re-applied once the walls were repaired. Separate contractors re-plastered and painted the almond-colored base coat on the walls.

"In some cases there was no evidence left because of damage over the years," Witsell said of the stenciling.

Ultimately the stenciling patterns that were recovered include the horizontal bands where the walls meet the ceiling, all the arch patterns, the spandrel designs (triangular pattern above the clerestory arches) and the column stenciling with the exception of the fleur-de-lis.

When unable to recover a design, Witsell said she and her staff relied on Gothic revival patterns from the book "Modern Church Decoration" published in 1900.

Relying on the photographs alone could have "caused a near miss," she said.

"This church was decorated totally by the formula for decorating churches for this period," Witsell said. "They had all kinds of patterns in this book that said border patterns, frieze patterns, panel patterns."

Patterns taken from the book or inspired by existing elements in the church include the crocket design, the band above the wainscot paneling, the diaper pattern (typical for filling large areas) behind the St. Peter and Paul statues and the upper band that connects the stained glass windows.

To introduce the parish to wall stenciling, Witsell and her staff painted the stenciling in the Seventh Street Chapel in 2004. Though the original designs had been lost, she used patterns true to the Gothic revival period in which the church was built. The colors used are also original.

With positive feedback from parishioners, the next step was to restore a sample in the church. The west corner of the north nave was chosen. After the wall was repaired in that section, Witsell and her staff of six stenciled two columns, an arch, the diaper pattern behind St. Peter and restored one Station of the Cross.

The purpose of this project, which was done by Christmas 2005, was to get a better labor and cost estimate for the rest of the church and to let parishioners see what the church would look like.

In a restoration report given to the parish following Easter, Msgr. Marczuk said, "There is an overall sense of appreciation for the elegance and warm beauty of the Victorian colors and designs which enhanced the Neo-Gothic architecture unifying the architectural elements of the building."

The stenciling restoration in the nave and transept began in May and for eight months parishioners managed with 100 fewer seats at Masses because of the massive scaffolding system required to complete the work.

But in the end, it was worth it because parishioners loved the results.

"When we took down the scaffolding and revealed the design, people were in awe," Msgr. Marczuk said.

For more photos of stencil details and process, see the Dec. 23, 2006 print edition of Arkansas Catholic.

In October 2002 the Cathedral of St. Andrew in Little Rock launched the $2 million "Our Cathedral; Our Heritage; Our Mother Church of the Diocese" capital campaign to fund its building restoration project.