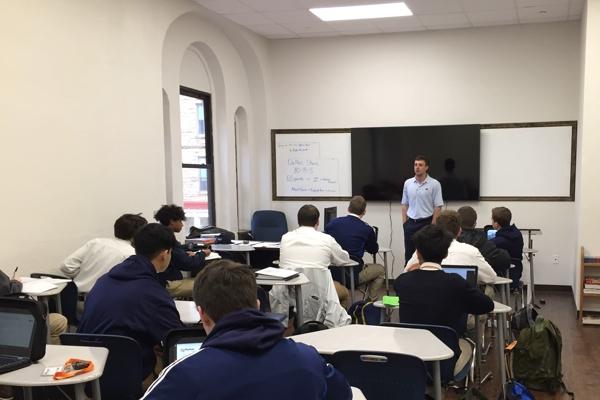 courtesy Subiaco Abbey
Subiaco Academy Social Studies Teacher Adam Winter leads a lesson in one of the newly remodeled classrooms at the school, Feb. 5. The abbey and academy have raised more than half of the funds in a $10 million capital campaign for facility upgrades and tuition assistance.

courtesy Subiaco Abbey
Subiaco Academy Social Studies Teacher Adam Winter leads a lesson in one of the newly remodeled classrooms at the school, Feb. 5. The abbey and academy have raised more than half of the funds in a $10 million capital campaign for facility upgrades and tuition assistance.

Subiaco Abbey and Academy are more than halfway toward reaching the $10 million goal of its “Legacy From Tradition: Onward Together” capital campaign.

“Essentially when we kicked off, our idea was we were going to be out talking to people pretty regularly, see people face to face and let people ask questions. I think it’s the best way to go through these things,” said abbey procurator Glenn Constantino, a member of the steering committee. “We’re asking people to be part of the tradition and be part of what goes on here and help us go into the future together.”

However, the COVID-19 pandemic was also about to kick off its own campaign of sorts, ushering in a time of masks, social distancing, isolation and vaccines.

“We’re asking people to be part of the tradition and be part of what goes on here and help us go into the future together.”

Subiaco’s campaign continued on as best it could meeting donors via virtual meetings and phone calls, but the momentum picked back up in 2021. Originally supposed to end this year, the campaign will most likely continue until 2023.

“I think uncertainty is the big word to really focus in on. …  We didn’t want people to get the wrong message from us that we were worried more about our ability to keep a campaign going versus praying for all our constituents,” said academy headmaster Dr. David Wright.

Though the campaign is hardly a secret, the public phase of the campaign will kick off at the alumni reunion the first weekend in June.

The slow-down lengthened the campaign, but it hasn’t missed a beat and arguably, it’s more important because of the pandemic, Constantino said, particularly with the needs for tuition assistance.

In speaking with alumni, tuition assistance was the key priority for the campaign right off the bat. Though tuition assistance is a long-standing tradition at the academy, campaigns in recent years focused on care for the monks and monastery improvements, Constantino said. According to the academy’s website, subiacoacademy.us, 2022-23 annual tuition, not including general fees, for day students is $8,750; $25,000 for a five-day border; $29,750 for a seven-day border; and $38,250 for international students. Tuition assistance is not available for international students. The all-boys academy has 141 students this school year.

Wright said the school is focused on developing the “whole person,” and this campaign reflects that mission.

“That was really the impetus and focus of much of these campaign elements, everything from getting them here in the first palace with TA, tuition assistance, to providing state-of-the-art facilities,” Wright said.

There are about 18 campaign funding efforts toward facility upgrades, welfare and education for the abbey and academy, including academic and athletic facility upgrades. Several projects have been completed at a more affordable rate, thanks to work from the abbey’s maintenance staff of six. They have worked on classroom renovations, plumbing, electric, gas, water and foundation work, with only some tasks subcontracted.

Constantino said, “We are certain that our maintenance crew saved us well over $500,000 versus the cost of using outside sources.”

Some improvements so far include handicap accessibility to the Coury House, a popular retreat house, and the choir stalls and paved parking lots. The HVAC has been updated in the Coury House, now allowing for individual heat and air control in each guest room.

At the academy, many projects have been completed including eight new classrooms in Main Building and Alumni Hall converted to a modern STEAM building — Science, Technology, Engineering, the Arts and Mathematics. Wright said the building includes a STEAM-inspired basement makerspace, industrial art space with “every imaginable woodworking tool” and a robotics lab with two fields for juniors and seniors with spaces to engineer the robot with technology and then build it.

Science classrooms have dual lab and lecture spaces. The academy previously had labs, but they were often separated from classrooms and there was no makerspace or industrial art space and no robotics laboratory. High-end technology includes 3D printers, laser engravers and heat press machines.

On May 1, a new swimming pool was completed for the athletics program. The campaign will also improve other sports, including an artificial turf field for football and soccer and HVAC for the gym. An all-weather track, replacing its current Red Dog track from the 1960s, will be used by students, monks and community members and will allow the academy to host Arkansas Activities Association track and field events.

Wright said Subiaco Abbey and Academy touches more than just the students and monks on campus, but everyone who visits to recharge spiritually, to support students or to buy products from the monks.

“You consider the Benedictine ministries that happen here, it’s extraordinary. It’s not a typical run-of-the-mill environment — people come here for a reason. People come here to reflect, really evaluate life and where they are,” Wright said, adding the Benedictine way encourages all to see Christ in every person. “We need to be hospitable toward each other, loving and kind toward each other and every day that’s what this place does.”