With one class remaining, 72-year-old to earn music degree from UCA in December 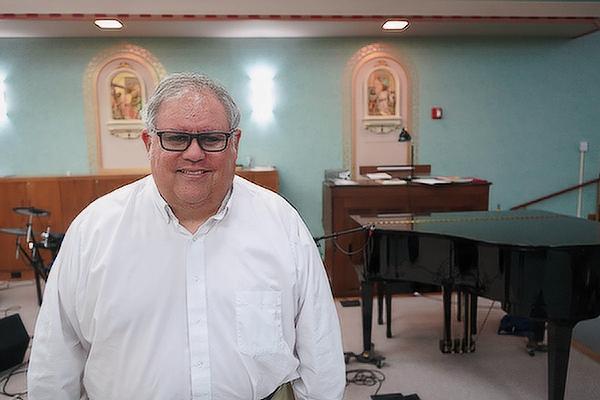 Aprille Hanson Spivey
Mike Woodrum, 72, smiles in the sanctuary of St. Joseph Church in Conway May 12. He is a student at the University of Central Arkansas pursuing a music degree.

Aprille Hanson Spivey
Mike Woodrum, 72, smiles in the sanctuary of St. Joseph Church in Conway May 12. He is a student at the University of Central Arkansas pursuing a music degree.

Career: 27 years in radio broadcasting full time, working in stations in his native Kentucky, Hot Springs and Conway. He spent another eight years as the “voice of the Wampus Cats” for Conway High School football and basketball. He was a supervisor of the James H. Clark Auditorium at Conway High School from 1998 until his retirement in 2016.

Why you want to know Mike: In 2016, convert Mike Woodrum had some “unfinished business” to take care of when he began attending the University of Central Arkansas in Conway to pursue a bachelor’s degree in music, with an emphasis in voice. His vocal talent as a baritone and his theater skills have shined throughout the years, including as a cantor at St. Joseph Church and as a member of the 10:30 a.m. Mass choir. With one more class to go this fall, he will officially graduate in December. His senior recital was April 24.

What feeds me spiritually more than anything is the fact that God has given me the gift of song. I feel like that is the one thing he's really given me. Yes, yes, he's given me a great voice to communicate, and I have lectored in the parish and all that, I've done those things. But God's given me a voice and you want to be able to use it, not for your glory, but for his glory. And I always try to remember that “Mike, this is not just about you.”

You had a tough childhood. You said you lost your mother at 9 years old, your father left because his new wife said “she had no use” for you and for a time, you were living with your grandmother. At 13 years old, you were sent to the psychiatric Central State Hospital in Kentucky for two years and then Bellewood Presbyterian Home for Children. How hard was that?

was diagnosed with being mentally ill; back then I was in elementary school. And it was, you look back on it now and you say, “How did I survive and how did I make it today with everything I’ve done?” … They called me “emotionally disturbed” is what it was. In today, in this day and time, we would see that as possibly being treated in an outpatient setting.

What is your favorite hymn?

My favorite hymn and the one that I want sung at my funeral is “Oh God, Our Help in Ages Past.” It reminds us so much that even though he's been helping people in the past, he's still here in the present with us and he will be with us here in the future.

What was your motivation to go to UCA?

I call it unfinished business because of what I did back in ‘70 and ‘71 (leaving college after three semesters). And I felt like that's the one thing that's missing from all I've done in my life.

Are you the oldest student in the music department?

We haven't been able to find out really. But there's thoughts that I'm probably one of the oldest people to ever do a senior recital at the university. But we haven't gotten that confirmed yet. … It meant so much to me because it meant that I finally had made it.

How does music impact your spirituality?

It impacts me because I feel like I'm giving, the first thing of course, is giving glory to God. But secondly, I think it's also being a witness to people that music can be utilized as a tool for evangelization. For helping us within the framework of the Mass as far as the Scriptures, we are reading and have song and hymn lyrics that reflect what we are learning about in the Scripture readings, and in the homily that's preached as well. Plus, giving glory to Christ through the holy Eucharist as well.