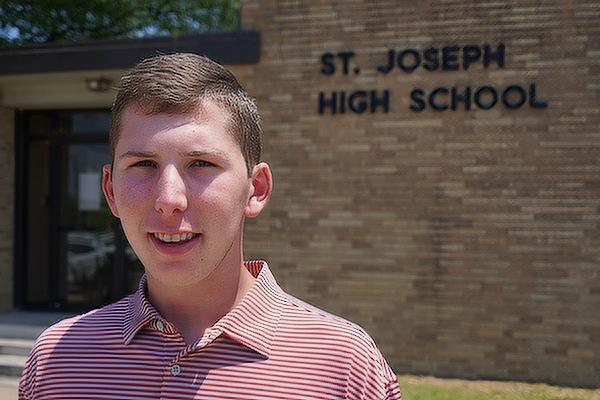 Aprille Hanson Spivey
Landon Baker, 18, smiles outside St. Joseph High School in Conway May 12. The senior, who is studying aviation, converted to Catholicism with his family in 2019, thanks in part to his time at the school.

Aprille Hanson Spivey
Landon Baker, 18, smiles outside St. Joseph High School in Conway May 12. The senior, who is studying aviation, converted to Catholicism with his family in 2019, thanks in part to his time at the school.

When he was 14 years old, the soft-spoken Landon Baker rode in a private plane for the first time, piquing his interest in aviation.

“Mom knew a lady, and her son was a pilot out here in Conway. And they did these discovery flight things, you could pay and you could go up for 30-40 minutes, fly around and go see your house. And so one day after school, me and dad decided to go do that. And so I got to sit in the front seat with the pilot. And we flew around, looked at the house and then he let me have the controls,” he said, adding it was a feeling of “a lot of control.” “It was very nerve-wracking because I didn't really know what I was doing. But at that same time, I knew that that was something that I wanted to keep on pursuing.”

It wasn’t the only time Baker, 18, explored new heights, at least in a spiritual sense. On April 20, 2019, Baker, then in ninth grade, converted to Catholicism along with his parents Damian and Christi Baker and younger brother Brendan. The family previously attended New Life Church.

“I started going to St. Joe when I was in fifth grade. And just over the years of coming to Mass weekly with all my friends and all that just made me decide one day that I think I want to do it, switch over. And so I kind of was the stepping stone for the whole family to switch over,” he said.

“Landon Baker is a student that can be depended on to give his best in every assignment and task asked of him. His maturity and focus on his future goals made him truly stand out in the Class of 2022.”

Baker began taking classes toward his pilot’s license in February 2020.

“And then COVID hit. And so it basically shut me down for nine to 10 months. And so when I started back from that, it was basically like starting over,” he said.

He now takes classes about twice a week through Central Flying Service in Little Rock. It is a flight training affiliate with Liberty University in Lynchburg, Va., which allowed Baker to start college-level flight training and classes in aviation online early. He plans to stay local, pursuing his bachelor’s degree in aviation through the program. He hopes to one day be a pilot for American Airlines or FedEx, flying commercial or cargo internationally.

“I guess this was just kind of a dream that I was given. So I figure I was given the dream for a reason so I'm going to do my best to follow it,” he said.

Aside from flying, Baker has competed on the St. Joseph golf team for four years.

“The whole experience, that was my first year on the golf team when we won the state championship, so getting rings, being on the winning team that year, it was just a fun journey,” he said.

St. Joseph High School counselor Kristen Piraino said, “Landon Baker is a student that can be depended on to give his best in every assignment and task asked of him. His maturity and focus on his future goals made him truly stand out in the Class of 2022.”

The most important lesson Baker said he will carry with him from St. Joseph is, “Know who you are and always strive for the best in yourself.”