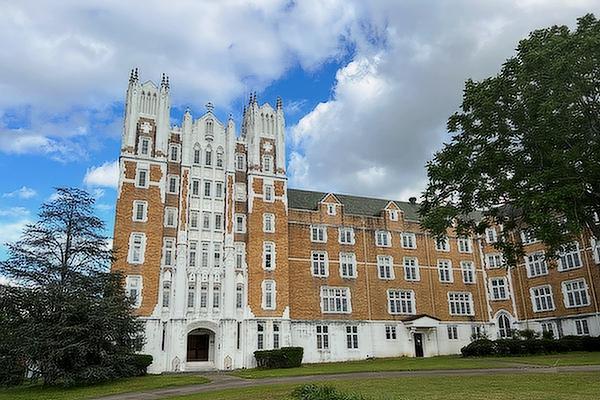 For many in Arkansas, keeping the old St. Scholastica Monastery standing is a necessary historical preservation.

On the other side is the building owner who says preservation or renovation of the six-story building is financially out of their reach. The only option, it sees, is demolishing the building.

Sister Pierre Vorster, OSB, 100, has lived in three different monasteries in her 81 years as a Benedictine sister.

“In 1940, I had just begun living at St. Scholastica Monastery in Shoal Creek when the entire building burned to the ground, along with St. Scholastica Church and rectory,” she said. “Every man in the parish had to volunteer one day a week to help rebuild the church and monastery. We used stones so that a fire like that would never take down our buildings again.”

“The longer the building is standing, the greater the hazard it will become to health and safety. Likewise, the monastic community cannot continue to drain funds intended for the care of their sisters to keep this building standing. For both these reasons, the sisters have a responsibility to make sure the building is taken down in a timely manner.”

When Sister Pierre first saw the six-story late Gothic revival monastery on South Albert Pike, she dreamed of new beginnings. The monastery served double-duty as St. Scholastica Academy, and when the boarders left each summer, the sisters on mission would come home.

With hundreds of nuns to be housed, “we set up a dormitory in the home economics room with as many beds as it could hold,” Sister Pierre said. “We had no air conditioning and when it got really hot in the summer, we’d all bring our pillows down to the basement gym where it was cool.”

When the former monastery was added to the National Register of Historic Places in 2006, Sister Pierre, who had led the efforts for its designation, told Arkansas Catholic, “We went out and looked at it. 'Is that really our building?' It is so beautiful, and we are so proud of it."

As the number of sisters diminished to approximately 70 in 2010, the sisters began to discern their future, which resulted in the construction of a third monastic home. In February 2019, the sisters moved to a new single-story building south of the 1924 monastery.

During their nine years of discernment, the sisters consulted with engineers, architects, builders and realtors who told them that restoring and renovating the monastery would cost $15 million.

“Our advisors told us that we could build three new monasteries for the same cost as restoring the one where we were currently living,” prioress Sister Kimberly Prohaska, OSB, told Arkansas Catholic.

Sister Kimberly said discreet efforts to market the building were fruitless, as potential buyers said it would be more economical to tear it down and build something new. Although the monastery campus is bordered by busy Rogers Avenue on the south, the monastery entrance was set back on South Albert Pike, a quiet residential street in a neighborhood of gracious older homes. Potential buyers knew that it would be much harder to get commercial zoning changes on Albert Pike, and uses for the existing building would be limited.

The sisters were also conscious of their responsibility to be good stewards of their resources, both for themselves and the larger Benedictine community. Since 1964, the sisters have been part of the Federation of St. Gertrude, a group of women’s Benedictine communities. The federation serves to assist and advise one another and make recommendations on viable options.

“Each monastery is autonomous, but when a federation monastery out west was hit with an earthquake and in desperate need of funds, we were all asked to help them rebuild,” Sister Kimberly said. “We recently digitized our library with the help of a visiting sister from Monastery Immaculate Conception (in Ferdinand, Ind.).”

Sister Jeanne Weber, OSB, president of the Federation of St. Gertrude, strongly agreed with the monastery that tearing down the 1924 building was the only viable option. Acknowledging the dangers of asbestos and severe water damage in the building, she wrote, “The longer the building is standing, the greater the hazard it will become to health and safety. Likewise, the monastic community cannot continue to drain funds intended for the care of their sisters to keep this building standing. For both these reasons, the sisters have a responsibility to make sure the building is taken down in a timely manner.”

Although friends and neighbors are supportive of the sisters’ decision, others worked diligently to prevent the demolition. Little Rock-based Preserve Arkansas, the only statewide nonprofit organization focused on state preservation, received preliminary $10,000 grant approval from the National Trust for Historic Preservation for an architectural assessment of the building. The sisters, who had consulted with experts over the past nine years, did not respond to Preserve Arkansas.

Fort Smith City Director Carl Geffken acknowledged the city has no designation that would prevent the demolition. The National Registry of Historic Places website confirms a registry listing does not change an owner’s property rights.

Al Rajabi, CEO of Sky Capital Group, which owns the historic Arlington Resort Hotel & Spa in Hot Springs, posted on social media that he hoped to convince the sisters to change their minds.

“It is quite rare to see a building in this remarkable shape,” Rajabi wrote. “To the untrained eye, chipping paint, outdated electric and plumbing may seem like a daunting task, but there are a myriad of programs developers like myself use to restore and preserve these gracious giants.”

Asbestos removal has been completed in the former monastery, and when the necessary permits are approved demolition will begin, likely this month. Oklahoma-based DT Specialization Company is handling the demolition. The sisters know some people are interested in getting salvageable bricks from the building to use in their gardens.

“We have a committee studying with us as we contemplate our next steps,” Sister Kimberly said. “As we work through the next few weeks, we will let residents know what may be available.”

“We love and respect those who want to keep the former monastery intact,” the prioress said. “We understand that they are acting out of love for the older sisters and the community. We are grateful for everyone’s prayerful and loving support during this difficult time regarding our former monastery. It does not go unnoticed.”

Those with questions about the demolition can contact the sisters at .