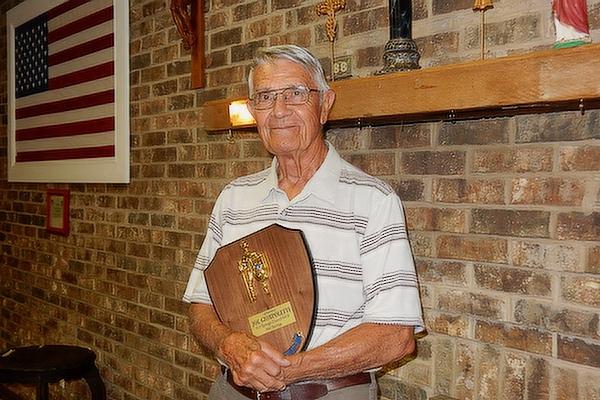 James Keary
Joe Giompoletti, a member of St. Mary Church in Hot Springs, holds the Knight of the Year award he was given May 1 during the Knights of Columbus state convention.

James Keary
Joe Giompoletti, a member of St. Mary Church in Hot Springs, holds the Knight of the Year award he was given May 1 during the Knights of Columbus state convention.

Family: Widower of the late Mildred Adele Giompoletti, who died in February 2021. He has a stepdaughter, two grandchildren and one great-grandchild.

Why you want to know Joe: Knights of Columbus Arkansas’ Knight of the Year in 2022 is a retired home builder who spends many waking hours helping others through construction and cooking. He is a founding member and the charter grand knight of Knight of Columbus Council 6419 in 1967. He runs the council’s kitchen and has cooked thousands of breakfasts for first responders and spaghetti dinners for St. John School in Hot Springs. He also leads a volunteer construction crew to raise money for Council 6419. He has helped St. John the Baptist, St. Mary of the Springs and Sacred Heart of Jesus parishes in Garland County with their building and improvement projects. He is fourth degree knight and has held most positions of leadership in the council and served on building committees at St. John and St. Mary parishes, most recently to complete the construction of the St. Mary parish hall.

He was honored as Knight of the Year during the Arkansas State of Council Knight of Columbus Convention on April 29 -May 1. “For decades, Joe Giompoletti has served as a very charitable and productive member of the Knight of Columbus,” said the Council 6419 nomination. “He is an outstanding Catholic gentleman and American.”

Spiritually, I like to help people and to help the church. If there is something I can do to help, I will do it. I like to spend my time working for the church and the school for the betterment of everyone. I figured the Knight of Columbus is the right hand of the parish priests, that was why I first joined.

You have been a Knight since 1967. How do you feel about being awarded Knight of the Year?

I was really proud to have received it. It never crossed my mind I would receive it. I was really happy. I was honored. You have to have the help from other Knights in order to do this.

You feed many people through spaghetti dinners, breakfasts and catfish dinners. Do you consider it a ministry?

I’ve made thousands of meals to help raise money for the school and the church. I feel like we made a lot of people happy. I volunteered to help with the spaghetti dinner for the St. John School Bazaar. Three years later I was the cook for the dinner. I have been in charge for 45 years. The Knights have paid for everything to make the dinners, and the people who have worked with me has helped raise money for the school. I don’t know what I would do without my Knights volunteers.

Do you believe you are doing the Lord’s work?

I just automatically do it. I think what pushes me is I grew up poor. I was the oldest of eight kids. I have so much. I just want to give something back.