Three parishioners give rosaries, medals and pamphlets to educate shoppers this summer 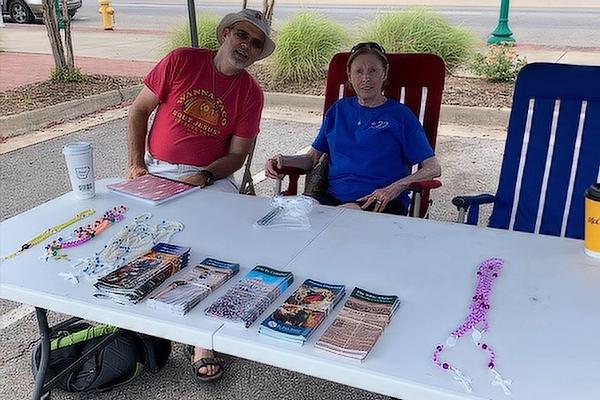 Following the format established by St. Paul Street Evangelization, they set up a booth at the Fort Smith Farmers Market June 13 and July 16, giving out rosaries, miraculous medals and pamphlets and telling visitors about the Catholic faith.

After holding several meetings at Sacred Heart of Mary, Schneider and his team attended a St. Paul’s webinar and, being reassured of ongoing support and advice, set up a booth at the Farmers Market.

“I think at first we were afraid, but we prayed and let God lead the people to our booth he wanted us to minister to,” Schneider said. “It was inspiring to know that we were instruments in his hands, and it gave us a lot of joy."

“I think at first we were afraid, but we prayed and let God lead the people to our booth he wanted us to minister to,” Schneider said. “It was inspiring to know that we were instruments in his hands, and it gave us a lot of joy. He was the potter, and we were the clay, instruments to reach out to the people.”

SPSE discovered, through trial and error, that offering rosaries and medals was an effective way to get people to stop and talk. If people walk by, showing disinterest, evangelists wish them a good day or say “God bless you.”

Only one person stopped to talk on the team’s first outing in June, a woman who had been baptized but hadn’t attended church in a while. They gave her a rosary, prayed with her and invited her to return to Mass.

Their second visit to the Farmers Market July 16 elicited more interest among shoppers. The team distributed seven to 10 rosaries and pamphlets. One visitor was a recent convert from the Episcopalian faith. He joined Immaculate Conception Church and showed an interest in becoming the fourth evangelization team member. A non-Catholic who was interested in Fort Smith history accepted the gift of the rosary and said it was nice to see Catholics out evangelizing. One woman initially showed disinterest but circled back to talk and received two rosaries.

One shopper had stopped attending Mass in person because of COVID but wanted to return because she was hungry for the Eucharist and was warmly invited to return. Another woman promoting the Farmers Market took a video of their booth and complimented them for promoting Jesus. In her video narration on Facebook, she invited visitors to come and pray with the team and receive a rosary.

Schneider posts blogs of their encounters at streetevangelization.com. They plan to host a booth at Sacred Heart of Mary’s carnival this fall and are exploring other locations. They would like to welcome team members from other local parishes so evangelization becomes a River Valley Catholic effort.

“As a public middle school teacher, I am restricted in what I can say, but there is such freedom in this ministry,” he said. “In the world, people set up with roadblocks, but if they take that first step at our booth real evangelization can take place.”