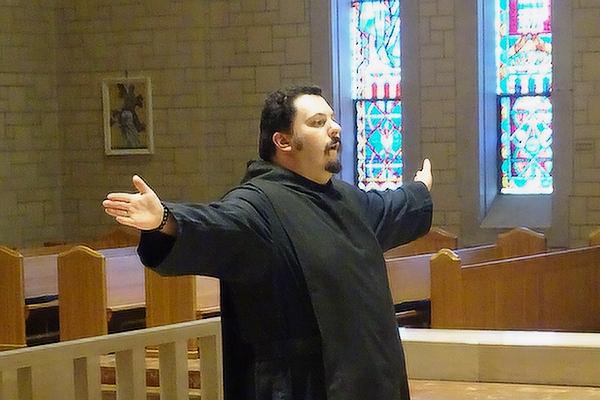 Courtesy Subiaco Abbey
Brother André Bedore, OSB, makes his solemn profession of vows as a monk of Subiaco Abbey at Mass in the abbey church Aug. 15.

Courtesy Subiaco Abbey
Brother André Bedore, OSB, makes his solemn profession of vows as a monk of Subiaco Abbey at Mass in the abbey church Aug. 15.

Brother André Bedore, OSB, never thought he would live in Arkansas, but it’s likely he’ll never live anywhere else after he made his solemn profession as a monk of Subiaco Abbey at Mass in the abbey church Aug. 15.

Born Jesse Bedore to Anne and Glenn Bedore Aug. 14, 1985, Brother André grew up in Tupper Lake, a small town in the Adirondack Mountains of northern New York. A self-described “quiet kid” who preferred staying inside and reading, he attended Holy Ghost Academy through sixth grade and transferred to public schools for seventh-12th grades. After earning an associate’s degree in accounting from the State University of New York at Canton, he earned a bachelor’s degree in philosophy from SUNY Potsdam. He was working as a reservations agent for a regional airline in western New York when he began thinking about his life’s direction and felt the need to discern God’s will.

“I was 29 and thinking about life. It was at this time that I first seriously considered religious life,” he said. “I turned to the internet to learn about religious orders.”

Because he worked for an airline, Brother André was able to arrange trips to visit different monasteries. He was drawn to the Benedictine order because of its strong community life, contemplative nature and the fact that most Benedictine monasteries have a school or college attached.

“I think it’s important for people to realize that we monks and religious are normal people; just like everyone else. We’re not all that different, well, maybe except for the vows,” Brother André said.

Though he never thought he’d move to the South, he felt drawn to Arkansas.

“Subiaco really stood out to me,” he said. “I was intrigued by the beauty of the natural area around it and the variety of life the community had. Everyone does something different. It was important that when I went on these visits to actually get to meet the monks and learn about their lifestyle. I really felt connected with the monks at Subiaco and wanted to be part of this abbey.”

After his second visit, he said, “Subiaco started to feel like home to me.”

Brother André made his first profession on Sept. 8, 2019. He took his name from St. André Bessette of Montreal, who was canonized by Pope Benedict XVI Oct. 17, 2010, and shares Brother André’s French-Canadian heritage. Since then, he has served as a soap maker, the abbey’s weather recorder, custodian of Mass intentions and monastic liaison to the abbey’s development department.

He said his parents and uncle, Father Alan Lamica, a diocesan priest in New York, were able to travel to Subiaco to witness his final profession last month.

During the August Mass in which he made his lifelong commitment as a Benedictine monk, Brother André lay prostrate before the altar and was covered with a funeral pall, symbolizing the death of his former life. The paschal candle, symbolic of the Risen Christ, then lit his path in his exodus from the death of his old life to his new life as a monk.

“What I like most about being a monk is being part of a close-knit community of men who dedicate their lives to serving God,” he said.

While they live a monastic life, which renounces worldly pursuits to devote themselves fully to spiritual work, Brother André said monks  —  and religious in general  —  are not all that different. He said he enjoys reading “The Lord of the Rings” trilogy by J.R.R. Tolkien and listening to rock music. He loves Ben & Jerry's Chubby Hubby ice cream, Starbucks Frappuccinos and Diet Mountain Dew.

“I think it’s important for people to realize that we monks and religious are normal people; just like everyone else. We’re not all that different, well, maybe except for the vows,” he said.