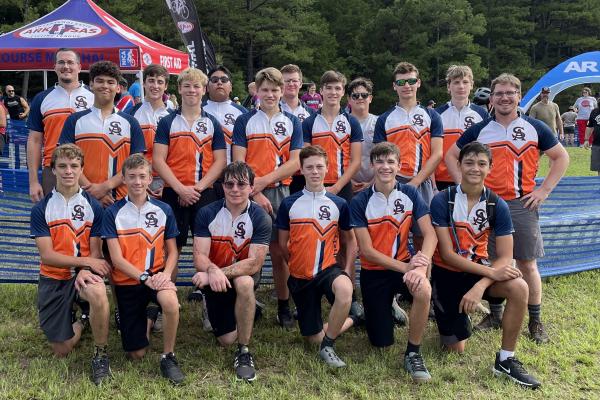 Courtesy Subiaco Academy
The inaugural Subiaco Cycling Team poses for a group photo at a September meet. The team grew out of the school's outdoor adventure program.

Courtesy Subiaco Academy
The inaugural Subiaco Cycling Team poses for a group photo at a September meet. The team grew out of the school's outdoor adventure program.

Nick McDaniel may not be the longest-serving member of the Subiaco Academy faculty, but he’s already leaving his mark on the student body in positive ways.

In addition to his roles as science teacher, resident life coordinator and head residential life coordinator of Heard Hall, he’s also launched a new program to get the student body outdoors.

“The Outdoor Adventure Program is a rekindling of the love for adventure that was established by the monks from 1920 all the way up,” he said. “Alumni talk about doing some pretty wild trips all the way into the ‘90s. With our program, we do a little bit of everything from rock climbing to paddling to backpacking. It’s a great way to bring more kids outside, but also to keep the kids outside.”

Mountain biking was also in the program mix, an activity that quickly morphed from a purely recreational activity to the formation of Subiaco Academy’s first cycling team, launched this fall.

“As I was putting together the outdoor program I thought, ‘Hey, I love riding bikes, let’s get kids on bikes,’” he said. “That soon progressed into having a much larger fleet and doing biking trips  —  gravel trips around Subiaco, riding at Mount Nebo, riding at Ben Geren and even overnight trips. It was a natural progression from, ‘Let’s ride around campus,’ to ‘Let’s go ride around the local area,’ to ‘Let’s go out and do an overnight trip to Mount Nebo,’ where we camped for two nights and went mountain biking.”

A conversation with a bike store staffer who services the school’s fleet of bikes planted the idea for a competitive team. A former multi-sport high school athlete in Iowa and collegiate wrestler for the University of the Ozarks, McDaniel was intrigued about competition-level riding.

McDaniel founded the team through the National Interscholastic Cycling Association in part, he said, for how it accommodates riders of all abilities.

“We still have kids who are learning how to ride a bike in racing who are twice as slow as our fastest guy,” he said. “NICA allows that situation to exist in the same event and supports both of those athletes. It allows the whole spectrum of riders to be there.”

McDaniel said despite competitive mountain biking at the high school level having been around for a relatively short time in Arkansas, the sport is exploding, having grown 15 to 20 percent annually in recent years. He said fields of 600 to 800 riders has been the norm for the team’s initial contests.

Subiaco’s inaugural squad drew 25 riders to the fall-season sport, with five meets on the schedule racing in west and northwest Arkansas. McDaniel, who coaches the team, said getting up to speed hasn’t been without challenges, but riders like senior Joey Sparks said the enjoyment of the activity extends well past one’s place on the leaderboard.

“I wanted to join the team because I enjoy bike riding with my friends and [competition] sounded like fun,” said Sparks, a native of New Blaine and a member of St. Scholastica Church there. “I’ve never competed before, but the first meet went well. It was very fun, and I learned I really like biking.”