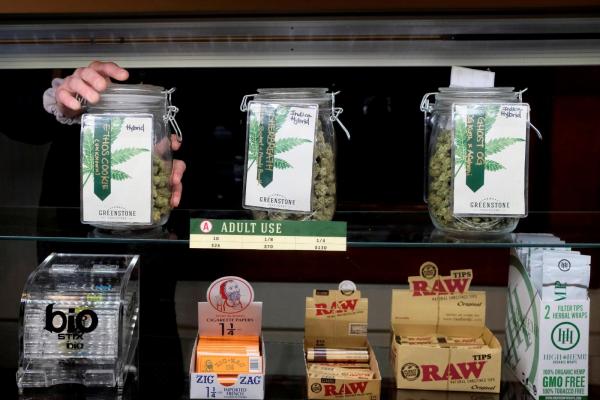 CNS photo/Matthew Hatcher, Reuters
An employee holds a jar of marijuana on sale at Greenstone Provisions in Ann Arbor, Mich., Dec. 3, 2019, shortly after it became legal in the state to sell recreational marijuana to customers over age 21.

CNS photo/Matthew Hatcher, Reuters
An employee holds a jar of marijuana on sale at Greenstone Provisions in Ann Arbor, Mich., Dec. 3, 2019, shortly after it became legal in the state to sell recreational marijuana to customers over age 21.

The Diocese of Little Rock issued a statement Sept. 29 opposing the legalization of recreational marijuana in Arkansas. A constitutional amendment to allow licensed dispensaries to sell cannabis products to people 21 and older for any reason is on the state ballot Nov. 8.

Bishop Anthony B. Taylor wrote, “When in 2016 the issue of medical marijuana was before the voters, I noted as part of my Faithful Citizenship letter that medical marijuana and recreational marijuana should be treated differently in matters of public policy. From a theological standpoint, the Church has no moral objection to the medical use of marijuana, just like any other drug, when used for a genuine medical purpose. But I also warned that as a practical matter, it would be very important — and difficult — to put safeguards in place to prevent it from falling into non-medical hands — especially the youth whose brains are still developing. So I noted that voters had a prudential decision to make regarding the legalization of the use of marijuana for a genuine medical purpose.

“Legalization of the recreational use of marijuana, on the other hand, would be a disaster for our state. Scientific evidence has linked marijuana to long-term damaging effects on brain development. (National Institute on Drug Abuse, "Drug facts: Marijuana," Revised December 2019.) 'When marijuana users begin using as teenagers, the drug may reduce thinking, memory and learning functions and affect how the brain builds connections between the areas necessary for these functions. Marijuana’s effects on these abilities may last a long time or even be permanent.' (Center for Behavioral Health Statistics and Quality.  "Behavioral Health Trends in the United States: Results from the 2014 Survey on Drug Use and Health.")

“One need only examine the impact of recreational marijuana in Colorado since 2013 to fully grasp what would be in store in Arkansas. A 2021 comprehensive report issued by the Rocky Mountain High-Intensity Drug Trafficking Area Program states that since recreational marijuana was legalized, traffic deaths in which drivers tested positive for marijuana increased 138 percent, while all traffic deaths increased 29 percent. And the percentage of marijuana-related traffic deaths increased from 11 percent in 2013 to 20 percent in 2020. Moreover, marijuana use by Colorado youth increased by 20 percent in the first three years of its legalization there, and their youth marijuana use remains much higher than the national average. Marijuana use negatively affects youths’ family life, social life and school performance. Do we really want to bring these all these social impacts to Arkansas?

“Legalizing a drug for recreational use that causes these effects on the human body, particularly our youth, is not a path civil society should choose to take. The Catholic Church teaches that 'the use of drugs inflicts very grave damage on human health and life. Their use, except on strictly therapeutic grounds, is a grave offense.' (Catechism of the Catholic Church, No. 2291) Therefore, the Catholic Diocese of Little Rock opposes the legalization of recreational marijuana in Arkansas.”