In antebellum parish, Catholics met in homes beginning in 1851 before church built 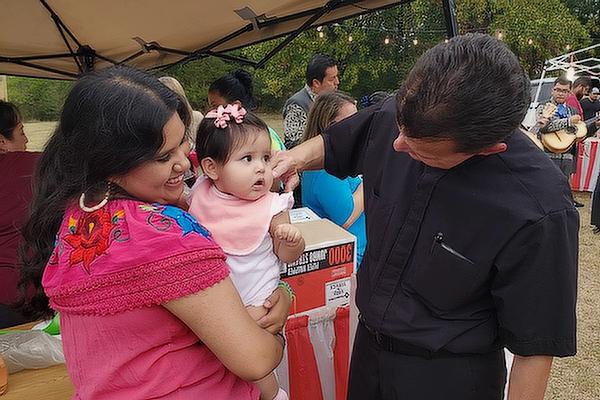 St. Michael Church’s anniversary Sept. 24 was celebration of 150 years of faith and fellowship in Van Buren.

The event began with a bilingual Mass concelebrated by Bishop Anthony B. Taylor and pastor Father Rick Hobbs and ended with a multicultural, intergenerational gathering. The midway had games for children and adults while teens enjoyed a chance to dent a car from the salvage yard. International food was served, in addition to hot dogs and burgers provided by the Knights of Columbus. Older parishioners gathered inside for pie and bingo. Entertainment was provided by the Subiaco Jazz Band, Danza Tonatzin and Estilo 19.

St. Michael’s current church campus, with a brick 380-seat church, parish hall and family life center, is nestled on six acres at Pointer Trail and 11th Street. The three buildings were completed between 1982 and 1992, providing classroom space, a kitchen, gymnasium and meeting hall.

It is the third home for the community. The first Catholic community gathered for home Masses celebrated by visiting priests in 1851 and began to build a church after the Civil War. A frame church on Sixth and Broad streets was dedicated in 1872, lasting 35 years until it was destroyed by fire. Parishioners bought a new plot on 13th and Cherry streets. The cornerstone for current St. Michael Church was laid in 1912 and dedicated by Bishop John B. Morris in 1913.

The first Catholic community gathered for home Masses celebrated by visiting priests in 1851 and began to build a church after the Civil War.

A new rectory was built in 1949, but when it was destroyed by fire in 1974, pastor Father John Hlavacek moved to a home on N. 11th Street and purchased an additional six acres for the current facilities.

In its 150-year history, St. Michael Church has served by diocesan priests, Benedictine monks and Jesuits.

Two attempts were made to open a Catholic school in Van Buren. The Sisters of Mercy opened St. Philomena Academy in 1897 but closed after a few years. In 1907, the sisters at St. Scholastica Monastery contacted Bishop Morris about opening a school, but it is uncertain as to whether their plans ever succeeded. Children are currently taught by the parish religious education program or in Catholic schools in nearby Fort Smith.

Rose Anna, Alberta and Mary Lou Kiene, sisters and parishioners for 74 years, are a part of St. Michael’s living history. They were honored in 2018 for their years of prayer and service, volunteering with the choir, funeral choir and Altar Society. When they lived on their parents’ farm, they held weenie roasts and hayrides for the parish.

Jenn Cummins, secretary at St. Michael for the past seven years, said the parish held different events each month of their 150th anniversary.

“We had sweets and treats after Mass in February, a fire and brimstone cook off in March, an international potluck in May and a family waterpark night in the summer,” she said. ‘We had a retreat day featuring Nikki Kingsley, a Muslim convert to Catholicism, and will have a retreat speaker for the Hispanic community in October. In November, we’ll have an outdoor church lighting with s’mores and a bonfire, and a Saturday night Christmas potluck. We’ll hold posadas around Christmas and invite everyone to participate.”

The parish also published an anniversary cookbook and updated its photo directory.

“It was such a blessing to come to St. Michael’s,” said Father Hobbs, who has served the parish since 2016. “It took me many years to become a priest, and I served in several parishes. At St. Michael’s, I was able to care for my mother until she died. It is such a blessing to say Mass and celebrate the sacraments with the wonderful people here. I am grateful for the Hispanic community’s patience with my Spanish.”

The parish is both multicultural and intergenerational, with lots of families and older Catholics, people whose family lived here for several generations as well as Mexicans, Salvadorans, Venezuelans, Filipinos and Vietnamese immigrants.

Andrea Chick, a parishioner for 20 years, said, “We have such a sense of family here. I have so many friends. People might change. Some move, and new ones come, but we still seem to stay close.”