Parish welcomes new priest and his family to Fayetteville 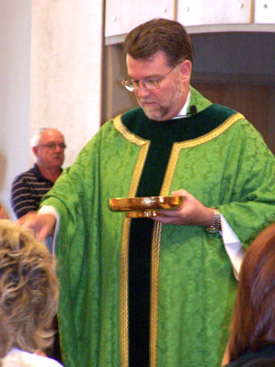 Sandra Ware
Father Bradley Barber distributes Communion during Mass Sunday, July 1 at St. Joseph Church in Fayetteville. He joins the parish from Corpus Christi, Texas, with his wife Jody and their four children.

Sandra Ware
Father Bradley Barber distributes Communion during Mass Sunday, July 1 at St. Joseph Church in Fayetteville. He joins the parish from Corpus Christi, Texas, with his wife Jody and their four children.

FAYETTEVILLE -- Students returning to St. Joseph School will have something different this fall: They'll be joined by the son of the parish's new pastor.

Father Bradley Barber, 51, is a former Episcopal priest who has since converted and was ordained in the Roman Catholic Church. He is now pastor of St. Joseph Church in Fayetteville. Joining him in the church are his wife Jody and the couple's four children.

While Father Barber's family situation is still unusual, he definitely has the Church's approval -- all the way from Rome.

Catholic News Service reports that about 80 former Episcopal priests have been ordained since 1980 under a pastoral provision instituted by Pope John Paul II. The Barbers moved to Fayetteville from Corpus Christi, Texas. Father Barber is now the second priest in the state with a wife and kids. Father Alan Rosenau, an associate pastor and hospital chaplain in Hot Springs, was the first.

A native of St. James, Mo., he grew up the son of an independent First Christian pastor. Father Barber joined the Episcopal church while studying music at the University of Arkansas in the 1970s.

Even while he was studying for the Episcopal priesthood, his Catholic in-laws were hoping for a conversion. Jody's grandmother took notice any time there was news of an Anglican priest converting.

"When it would hit the newspaper, she would cut that article out of the newspaper and send it to me," Father Barber said.

She died before her grandson-in-law was ordained an Episcopal priest in 1983, but over time changes in the church increasingly disturbed the young man. He said he was especially bothered by the fact that doctrine was subject to a democratic vote and could be changed by a simple majority vote. He wondered, would God really accept sacramental changes approved by a 51-49 percent vote when it was Jesus Christ himself who gave us these sacraments?

Ordaining women to the priesthood, recognizing same-sex relationships as marriages, and allowing the church to be led by openly gay pastors, those were things that troubled Father Barber in his role as an Episcopal priest. He said the pivotal point came when he was visited by a couple who were considering leaving the Catholic Church over doctrinal disagreements.

The Episcopal priest counseled the couple to remain in their own church, and he realized he wanted to be there, too.

"Theologically, I knew I was Catholic," he said.

That was the easy part -- so was telling his wife and children. For his wife, Jody, it was a matter of coming home.

"Obviously, she supported me in my (Episcopal) ministry, but she was always, at heart, Catholic," Father Barber said.

More practical matters were a bit more challenging. "Where would I now get my health insurance?" was one example of the more mundane issues, he said.

Even while he waited for word from Rome, Father Barber said he had no doubts about converting.

"I knew I had done the right thing," he said, and he believed whatever decision came would be the right one. "Faith in the Church is never difficult." Besides, he said, "Rome has a special place in her heart for Anglicans."

"To offer my services as a priest was really secondary." If the pope didn't approve, he said, "it would be difficult but I would have to accept (the decision) and sit in the pew the rest of my life."

Two years and three months -- it was a long wait during which Father Barber worked as dean of students at a Catholic high school in Corpus Christi.

That was 13 years ago. The move to Arkansas took a little longer, but again, Father Barber's in-laws were at work.

Jody's father, Buddy Margrave, encouraged Msgr. J. Gaston Hebert, administrator of the Diocese of Little Rock, to find a place for Father Barber in Arkansas. The priests met to discuss the possibility last August and in December, Msgr. Hebert asked Father Barber to consider leading St. Joseph in Fayetteville. He visited the parish "incognito" in January and soon after, began working out the details of a move.

Moving six people, three cars and two cats was somewhat grueling, but the family moved in this summer, and the Barbers seem right at home. They are not strangers to the community.

Jody Barber is a graduate of Mount St. Mary Academy in Little Rock. Several years ago, they bought property outside Fayetteville -- near Elkins --where they hoped to retire some day. The family has periodically vacationed in the area, camping and enjoying the environment.

The couple's eldest son, Cameron, is a graduate of Texas A&M in Corpus Christi but plans to attend graduate school at the UA. Second son, Ross, will be a senior at the UA. Daughter Allison will be a junior at Fayetteville High School and youngest son Brenton will be a seventh-grader at St. Joseph.

"I suspect he would say his work was done," Father Barber said of his father-in-law and his quest to have the family back in Arkansas.

One of Father Barber's first goals is to get to know his parishioners.

"It's always nice when family knows one another, you know," he said.

On permanent loan from the Diocese of Corpus Christi to the Diocese of Little Rock, he wants the parish to know he's here to stay. While he has some ideas for the parish -- including building a strong youth ministry and, eventually, a music ministry -- there's no need to rush into anything, he said.

"I'm here for the long haul," Father Barber said. "God willing, I will retire from this parish."

Noel Nieto said he believes the parish is already responding to its new priest. Nieto, a member of the parish finance council, attends St. Joseph with his family. "My sense is that people are very impressed with Father Barber. They feel he is going to be ... inspiring.

"He wrote us a letter about his journey" to the Catholic Church, Nieto said. "I think that was very meaningful."