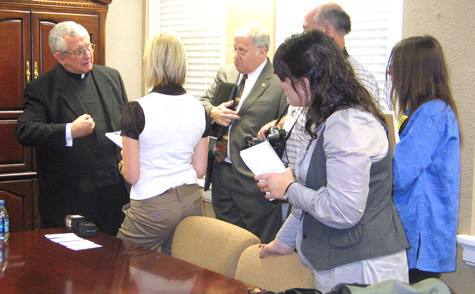 Six sisters from the Monastery of Our Lady of Charity and Refuge in Hot Springs were excommunicated by the Catholic Church for their involvement in a schismatic association based in Quebec, Canada.

It is believed to be the first time anyone in the Diocese of Little Rock has been formally excommunicated.

"A handful" of laypeople in Hot Springs were involved in the Army of Mary but have not been identified.

The association is no longer considered a Catholic organization because of its false teachings on the Trinity and Mary, a Vatican official said.

"The Army of Mary has clearly and publicly become a schismatic community and, as such, a non-Catholic association. Its particular teachings are false and its activities are not able to be frequented nor supported by Catholics," according to a formal declaration written July 11 by the Vatican's Congregation for the Doctrine of the Faith.

The congregation released the declaration Sept. 12 and Msgr. J. Gaston Hebert, diocesan administrator, learned of the decision on Sept. 17.

On Sept. 18 Msgr. Hebert visited with the sisters and their chaplain, Father Erik Pohlmeier, also pastor of St. John and St. Mary churches in Hot Springs. After reading the declaration, Msgr. Hebert gave the eight sisters in attendance one week to prayerfully consider their decision.

He returned to the monastery the night of Sept. 25 and accepted the decisions of six of them to leave.

"It is a painfully historic moment in this Church," Msgr. Hebert said at a press conference Sept. 26 at St. John Center in Little Rock. "These are my friends. I have known them my whole life."

Church officials in Canada, Rome and Little Rock have talked with the association's priests, sisters and lay members for many years about their teachings, and they have failed to recant any errors. The final act happened June 3 when Father Jean-Pierre Mastropietro, an association priest, invalidly ordained six men in Canada.

Diocesan officials said Bishop J. Peter Sartain remained in dialogue with the sisters from 2001 to 2006 about their involvement in the Army of Mary, encouraging them to stop promoting the association among the laity.

Father Benedict Picard, a member of the Army of Mary, served as the order's chaplain in Hot Springs from 1998 until he returned to Canada in 2004.

"Bishop Sartain worked with Father Picard and the sisters to try to get them to disassociate with the movement," said Deacon Bo McAllister, diocesan chancellor for canonical affairs.

Three of the six sisters are siblings. Sister Theresa Marie Lalancette, the superior, and her sisters, Mary Anne Lalancette and Mary Gerard Lalancette, came to Arkansas from Quebec more than 50 years ago.

Sister Mary Thomas is director of the order's day care center and the only American-born sister to be excommunicated. She joined the order after attending St. Michael boarding school. Sisters Marietta and Mary Theresa, assistant superior, were both born in Canada.

Ten women religious are members of Our Lady of Charity and Refuge.

Sister Maria Dinh, the convent's secretary, and Sister Mary Elizabeth Dinh are originally from Vietnam and have never been associated with the Army of Mary, Msgr. Hebert said. The two sisters, who are not related, will be moving to another convent.

Msgr. Hebert said the other two sisters are living in a nursing home and could not "knowingly and deliberately" choose to remain with the Army of Mary. They are Sister Mary Olive Cote, who at around 90 years old is the order's oldest member, and Sister Mary Anthony Bessette.

When reached by telephone Sept. 28, Sister Theresa Marie, the superior, said she would not speak to Arkansas Catholic until she had time to read this article.

"We will be responding to you next week, not this week," she said.

Asked if the monastery and its day care are in still operation, she said, "Nothing has changed here."

During the press conference, Msgr. Hebert said the sisters' decisions mean the monastery will no longer be recognized by the diocese, and laity in Garland County should not financially support the order.

"They will no longer have any sacraments. We removed (the Blessed Sacrament) from the premises last night," he said.

Msgr. Hebert, a Hot Springs native, was the order's chaplain in 2005 and witnessed first hand some of the sisters' beliefs.

"From my childhood I have known them. They are good, good women who love God and have served the community beautifully. They have served the poor, outcasts, abused women, children who could not afford to be educated. They have done all this over the years because they love God. But somewhere along the line they fell into this Army of Mary and became entranced and deluded with this doctrine that is heretical."

Our Lady of Charity and Refuge opened in Hot Springs Sept. 27, 1908, when five French-Canadian sisters arrived at the request of Bishop John B. Morris. At one point, there were 27 sisters living at the former "mansion" on 10 acres on Malvern Avenue. Between 1910 and 1968 the order operated a girls' boarding school, trade school and laundry.

Known locally as Good Shepherd Home, the sisters operated St. Michael School for children in pre-kindergarten to sixth grade until 2001. Since the school closing, the order continues to care for infants to pre-kindergarten students.

"We love the sisters, the school and the children," she said. "We don't understand why they believe in what they believe. We are very saddened by what has happened."

Since 2001, the Knights have raised between $3,000 and $5,000 a year to support St. Michael and have helped paint and refurbish many areas of the convent and school.

"They are today still the loving, caring and service-oriented sisters they were prior to last week. And I care for them dearly," Mike Kerwin said.

The future of the order and monastery has been questioned. The order owns the property on Malvern Avenue. The order is an autonomous religious order and is not connected with any other monastery outside of Arkansas.

Msgr. Hebert said he hopes all Catholics in the diocese will continue to pray for the Monastery of Our Lady of Charity and Refuge and that some day the six women will reconcile with the Catholic Church.

"Christ never turns his back on anyone and neither do we," he said.

Sheila Harrison contributed to this article.