Couple's search for true church leads them to Catholicism 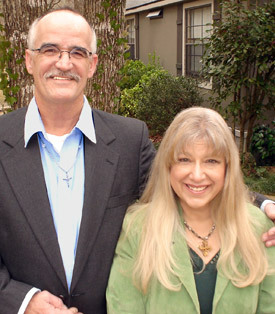 Dudley and I met and married after we had both gone through divorces. We blended a family of eight children, so our life was full of excitement and difficulties.

We had both been raised in Protestant churches and have families who serve the Lord according to their understanding of scriptural truth. We had little disagreement over our beliefs. Even though he was taught the doctrine "once-saved-always-saved" and I wasn't, we studied the doctrine and concluded this was not the truth.

We were both taught that miracles were not for today, that God never used supernatural gifts or events, and that there was a "great gulf" between the living saints and the dead saints.

We were both taught that Catholics were doctrinally off base and to be pitied because they were generally not "born-again."

We went to several different churches and studied many other denominations, including Mormon, Jehovah's Witness and a few splinter spin-offs of the charismatic non-denominational movement. Each time, after a great deal of study, I rejected these churches.

Of all the churches we explored, visited or studied, the Catholic Church was the only church we had never considered. It was as though this one was completely unworthy of consideration. We thought we knew all about the Catholic Church and what we knew was wrong, so why bother?

In the late '90s, after the "Left Behind" series of books and movies were released, we started studying the "rapture" doctrine for ourselves. We felt the Bible did not substantiate what we had been taught.

I decided to research the end-time teachings with the early Church writings. Time and time again, I found helpful historical documents on Catholic sites, and my searching always ended up in the Catholic Encyclopedia. After concluding that the rapture doctrine was not taught by the early Church, I began checking into many other doctrinal teachings we had been taught.

Studying the writings of the early Church Fathers lead me to conclude that the early Church was Catholic! I was shocked, and it took me a few years to have the courage to share my discoveries with Dudley.

I feared he would reject that which I had already believed to be the truth. Not only did I fear his reaction, but our families' reactions. Not only did I study online, but I would secretly listen intently to EWTN and was constantly moved by the things I was hearing.

I thought, "I am actually Catholic, but maybe I can be Catholic in my heart and not actually join the Catholic Church."

The day arrived when I was so convicted I could no longer keep these things in my heart. Dudley came home from work one day, and I blurted out "Guess what? We are Catholic!"

He laughed, saying, "Why do you say that?"

One by one, I answered his list of questions proving that what we had been told about Catholics and what they really taught were two different things. Instead of being upset with me, he seemed genuinely excited.

For the next few days, we discussed these things and I showed him EWTN. When we studied about the Eucharist and what the early Church taught about the Lord's Supper, that was it. We knew we had to be Catholic. It was so plain in the Bible that our search was over.

The only questions we still had to have answered, were praying to "dead people" and the doctrinal teachings about the Blessed Mother, Mary.

On our wedding anniversary, Oct. 5, 2005, Dudley asked me where I would like to go to celebrate. I told him "To see a priest."

We went to see Father Gregory Pilcher, OSB, at Holy Redeemer Church in El Dorado. The next day we had an appointment to talk with him and attend Mass. Dudley had gone to Catholic Mass many times while attending school in Lafayette, La., being one of only two Protestant students in his class.

When the school dismissed class for saints' feast days, he would go right along with his friends until his mom found out. Back then, considering Catholicism was unthinkable for him, but he shared that he always felt very comfortable in the Catholic Mass.

Naturally, we had to go through the Tribunal process to deal with our previous marriages. Even though we had been successfully married for more than 25 years, it was a shock to know we could not join the Church or take the Eucharist until we received annulments.

This was a huge test of our faith and our patience, and it took more than two years to accomplish. It was even a struggle for us to find cooperative witnesses for the Tribunal. We discovered that very few Protestants would help a person become Catholic. Perhaps this long wait has made our "journey home" all the sweeter, because Easter Sunday is a day we are so excited to see arrive. Hopefully, our families and friends will see the Catholic Church in a new light because we represent Christ and our Church properly.

We still feel much gratitude and appreciation for our former churches and teachers, because they gave us the importance of knowing what we believe, or learning to study the Bible, and for our strong consciences. We had good and early formation, so that we hungered after the truth, after righteousness, and we know that these things will never go to waste.

Now that we have studied what we believe, we can also find our Church teachings in the Word of God. This is important because we are often called upon to have a ready answer as to why we have done such a strange thing like joining the Catholic Church.