'Every parish has become my family,' Msgr. Kordsmeier says 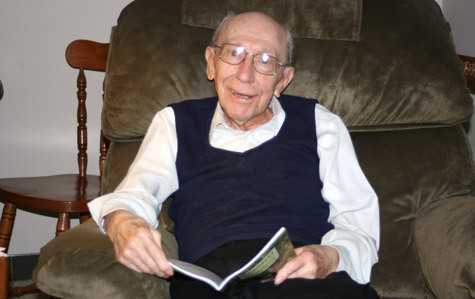 He recalls going to Mass often at Sacred Heart Church in Morrilton with his mother and serving at Mass.

"I was in grade school (Sacred Heart), we served an awful lot because we lived in what we called town, about a mile and a half from the church," Msgr. Kordsmeier said recently. "But I always wanted to say Mass."

He said his mother had a lot to do with his serving often at Mass, especially during the summer, be cause of how often she went to Mass. During the school year he did not mind because they had Mass every morning before classes started. In the summer he sold newspapers. He recalls the church bell would ring a half hour before Mass and he would go to the church, with his remaining papers. Half the parishioners lived outside of the town and that was where he sold many newspapers.

Msgr. Kordsmeier recalls playing Mass often, in an unfinished upstairs portion of the house. They cut pictures out of a store catalog to decorate. He said he was reminded by a first cousin about the role playing. She came to visit one day and wanted to be a server, but he would not let her because at that time girls were not allowed to be altar servers. The seventh of 10 children, he recalled his younger brothers acted as servers.

Msgr. Kordsmeier said he loved working in a parish but did not go into parish work immediately after ordination on May 26, 1949.

Following the death of Msgr. John J. Healey in 1952, Msgr. Kordsmeier was appointed superintendent of schools and director of hospitals. At that time, there were 68 Catholic schools with more than 8,000 students, and 12 hospitals in the diocese.

In 1960 he became director of Catholic Social Services and five years later he was appointed assistant chancellor of the diocese.

The following year he was named pastor of St. Mary Church in Paragould.

Other parishes he served at included St. Anne Church and Immaculate Conception Church, both in North Little Rock, St. John Church in Hot Springs and St. Jude in Jacksonville. From St. Jude, Msgr. Kordsmeier went to Mary Mother of God Church in Harrison, where he served until his retirement in 2000. The parishioners built new churches in Harrison and Jacksonville while Msgr. Kordsmeier was there.

"Every parish has become my family, I pray every day for all the families of the parishes, and for forgiveness of those I may not have pastored rightly," he says.

Msgr. Kordsmeier now resides at St. John Manor on the St. John Center campus in Little Rock, the same building where he lived while studying at the seminary.

"I love the priesthood, I always did," Msgr. Kordsmeier saidys. "No matter what happened I always desired to be a priest, to say Mass."