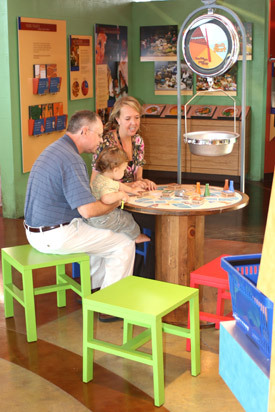 Malea Hargett
A tour guide at Heifer Village tells about a man and child about an interactive board game at "Change for Change," which illustrates how small loans can lift communities out of poverty.

Malea Hargett
A tour guide at Heifer Village tells about a man and child about an interactive board game at "Change for Change," which illustrates how small loans can lift communities out of poverty.

One of Little Rock's newest tourist attractions is also a place to educate yourself and your family about the world around us.

Heifer International, a non-profit, humanitarian organization to help people around the world out of poverty, opened Heifer Village near the Arkansas River in June to tell its story through 80 displays and hands-on exhibits. About 20,000 people so far have visited Heifer Village and made an optional tour of Heifer International's world headquarters, known as the "green building."

The typical visitors are families, including many from out of state.

"Often we will see grandparents bringing grandchildren, moms bringing their kids," said Jim Rollings, Heifer Village senior director. "The one thing that is common with all of our visitors is we see a high-level concern and sophistication about topics of social responsibility. They generally don't come in naïve to the subject ... They are sharing with their children. They are extending the moral and ethical behavior to their children by showing them the effects around the world that their behavior can have."

Heifer International has Christian roots. Dan West, a Church of the Brethren relief worker and Midwest farmer, was handing out rations of milk during the Spanish Civil War in 1944. He saw that if the people he was serving had cows, not just cups of milk, they would benefit greatly. Heifers, young cows that have never given birth, were bred and shipped overseas to provide livestock to the poor in developing countries. Heifers for Relief founders felt it was better to give families livestock, such as cows, goats, chickens and sheep, and allow them to use the milk, meat or eggs to feed themselves and bring in financial support. Those receiving an animal must agree to "pass on the gift" of an offspring to another family. They also must share the training they receive.

In 65 years Heifer has served 10.5 million people in 125 countries, including the United States.

Heifer is not, however, associated with one faith or denomination. Eleven "covenant agencies," including the National Catholic Rural Life Conference, are committed to the mission of caring for neighbors and the earth.

"From the beginning, this vision has encompassed all spiritual paths and all people who understood that to serve God we serve our brothers and sisters. Today, Heifer is comprised of people of many faiths working together around the world to realize its vision," according to the organization.

Visitors to Heifer Village are immediately introduced to the history and mission of the organization. Then they can read, watch videos and see tangible examples of what Heifer believes are the ways to end poverty in the world.

The five solutions are:

Kelli Westbrook, a volunteer tour guide and member of the Cathedral of St. Andrew in Little Rock, said the facility is self-guided with written descriptions and videos throughout the building. It is geared for students as young as third grade.

"It is very text heavy," she said.

Parents with younger children can, of course, read about and explain the items, Westbrook said.

A few exhibits are specifically created for children and are interactive, such as a touch-screen story called "Journeys to School" and a board game called "Change for Change."

In the fair market area, Westbrook points out how consumers in the United States should become more familiar with the companies they buy from. Heifer suggests searching company Web sites for their code of conduct, which will explain their commitments to fair markets or treatment of employees.

Westbrook said education is one of the most important areas for families getting out of poverty. She said families overseas often need money to buy books and uniforms to send their children to school.

"The first thing they want to do in these developing countries is send their kids to school," Westbrook said.

She said she also likes the facts about poverty printed around the facility.

"Poverty is not caused by laziness or ignorance," Westbrook said.

Heifer believes poverty is caused by a lack of opportunity and access to basic resources, such as education, health care, clean drinking water and food.

A large model of a sustainable farm in Vietnam illustrates all the different ways farmers are able to support themselves and teach others how to become self-sufficient.

Rollings said anyone's tour should end at the Make a Difference Lab, where he or she can learn about ways to protect the environment, volunteer, recycle or support local farmers.

At the conclusion of their visit to the lab, visitors can type in their commitment to changing the world. Their first name, city and commitment are then projected on a large screen overhead.

"A little bit done by each of us can do a lot," Rollings said.