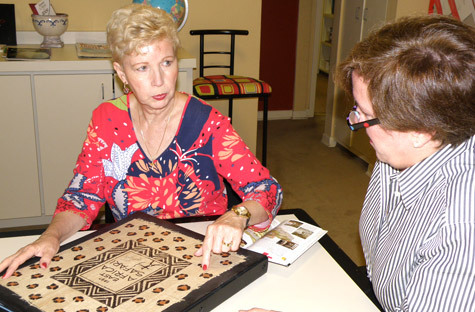 During the fuel price spikes and the economic instability of the past few years, people may have deferred thoughts of vacations to faraway places. But experts with local travel agencies suggest good deals are available, and now may be the time to book those trips.

Cruises can be some of the best deals in travel because they're all-inclusive, said Margaret Kemp, chief executive officer at Poe Travel in Little Rock and parishioner at Our Lady of the Holy Souls Church in Little Rock.

Kemp compared traveling to Paris as an individual and paying for hotels and meals separately to Mediterranean cruises, which include lodging and meals in the price. Some cruise companies also enhance their packages with free airfare to certain destinations, free shore excursions and shipboard credits to spend on board, she said.

Diane Hughes, president of Still Cruisin,' a home-based travel agency and a parishioner at Christ the King Church in Little Rock, suggests fall can be a good time to travel by air, too.

"In the fall, airfares to Europe and Asia are quite good and to Australia. They need to fill airplanes," she said.

Hughes said travel to Europe is a better deal now than two years ago because of the exchange rate with the euro and the pound.

"But it's still expensive," she said. "The food is extremely expensive. I don't know how the locals can afford to eat out in restaurants, but they do."

Another tip for European travel is to pay in dollars this year for an upcoming trip, Kemp said.

"Then it doesn't matter what happens with the euros," she said.

The best value in Europe is the train and subway Metro system, Hughes said. A Metro pass for two or three days costs approximately $15, she said.

"It is extremely easy to get around. The train is very accommodating and clean," she said.

Less expensive foreign destinations on this side of the Atlantic include Costa Rica and Mexico, according to Dottie Minor, president of M & M Travel Consultants in Hot Springs and parishioner at Christ the King Church in Little Rock.

Because of problems with the drug trade and the swine flu, some agents are not recommending Mexico right now.

"But we are," she said, who adds most of the problems have been in the internal parts of Mexico, away from the resorts.

"Mexico is a good place to go because people are not going because of (concerns about) the swine flu," she said. "Our clients (who have gone recently) have liked it much more because it's not as busy."

In addition to foreign countries, Hughes said travelers should consider domestic destinations, from the national parks and the mountains to the coasts.

"I've done the Caribbean several times," she said. "I think we have beaches that are just as nice."

Minor suggests Las Vegas, which she said is "so much more than gambling."

"The hotels are like mini-vacations" because of their themes, she said. Visitors can also enjoy museums, art galleries and the Hoover Dam, she said.

Kemp said family travel has become a "huge" trend as vacations become multigenerational. She mentioned extended families gathering to celebrate holidays together at a resort or vacation destination. She also had a group of grandfathers, fathers and sons who went to the Amazon together.

"That's what changed (in travel) after Sept. 11 and the economic downturn," she said. "Before, Americans were consumers (of travel). Now they're sharing time and experiences that really enhance their lives."

In addition to the Disney theme parks, Minor suggests families would enjoy Hershey Park in Pennsylvania, San Antonio, Texas, and the Grapevine Vintage Railroad, a restored train that runs between Grapevine and Fort Worth, Texas.

There has also been a "great increase" in religious travel, according to Hughes, who includes not only pilgrimages but visits to cathedrals and religious sanctuaries.

Several agents recommended trips to the village of Oberammergau in southern Germany for its 2010 presentation of the Passion Play. Residents of the village have performed the play every 10 years since the 1630s.

"1,500 people perform, and they're all from the village," said Kathy Primm, manager at Sue Smith Vacations and parishioner at Immaculate Conception Church in North Little Rock.

Other places of interest to Catholics include Rome and the locations of Marian apparitions, such as Fatima, Portugal; Lourdes, France; and Medjugorje, Bosnia-Herzegovina.

"You're so awestruck by what you've seen," Primm said. "The stories just come alive."

"There are a lot of missions and cathedrals to see," she said. "It's an easy drive, and so many things in St. Louis are free."

Despite safety concerns, there are still trips to the Holy Land.

"We do have a little bit of reserve right now, but our tour operators let us know in advance the places to avoid," Primm said.

"It's been the same situation for the last 40 years," Hughes said. "(The tour operators are) aware of this, and they're very protective of the tourism industry."

Sometimes local travel agencies are able to involve a local priest in these tours. For example, Father James P. West of Immaculate Conception Church in North Little Rock has led a trip to Rome for Sue Smith Vacations, and Msgr. R. Scott Friend will accompany a trip to Israel through Poe Travel.

Primm said the priest's involvement can create a "comfort zone" for travelers, particularly those leaving the country for the first time.

"For a lot of people in general, it's a comfort to travel in groups," she said. "(With these trips) it's their faith, and the priest will be with them every day."

All of the agents said peace of mind, knowledge and savings are reasons to use a travel agent for planning a vacation.

"We actually travel to the destinations we sell, so we know the ins and outs," Kemp said.

"Booking travel online can be unpredictable," Hughes said. "Some Web sites give euro prices instead of U.S. dollars. They're not completely upfront and clear about what they're offering."

"We're the ones that get deals from vendors every day," Minor said. "We do all the work. What might take 30 to 45 minutes for us might take someone else days."

"If you book online, you have nobody to call (if something goes wrong)," Primm said. "We are here 24 hours a day. We can take care of you."

Several agents also mentioned the importance of travel insurance, which can be purchased through a travel agent.

"If you have saved for several years, it would be a shame to lose (the money) because of unexpected situations in which you have to cancel," Hughes said. "I don't like anyone to go without insurance, and I take it out on myself."

The trip will include visits to several cities in Portugal, including Lisbon, Santarem, Fatima, Alcobaca, Nazare, Queluz, Cascais, Estoril, Cabo da Roca and Sintra. In Italy, the pilgrimage will stop in Assisi, San Giovanni Rotondo, Mont S'ant Angelo and Rome. The pilgrims will attend daily Mass, including at St. Peter's Basilica in Rome.

Fran Boudreaux, a representative of Regina Catholic Tours, said the Hot Springs Village group is scheduled to lead the fourth decade of the rosary for the public procession in Fatima and four of the men will carry the statue of the Our Lady of Fatima for the procession. The cost is $3,328. Boudreaux said the trip is nearly full, but a few spaces are still available. For more information, call Boudreaux at (501) 984-1519 or (888) 948-3837 or e-mail her at .

Pilgrims will stop in Tel Aviv, Tiberias and Jerusalem. They will get to experience Nazareth, the Jordan River, Mass on the Mount of Beatitudes, the Mount of Olives, the Garden of Gethsemane, Mount Zion and Manger Square. Poe Travel in Little Rock is handling the arrangements. For more information, call Margaret Kemp at (501) 376-4171.