Senior athelte a force on the court, course and field for the Bulldogs 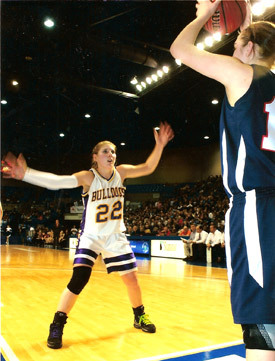 Jessie Moix, 17, a senor at St. Joseph School in Conway is a fierce competitor on and off the court.

Jessie Moix, 17, a senor at St. Joseph School in Conway is a fierce competitor on and off the court.

CONWAY -- Behind the sweet smile and soft voice of Jessie Moix is a fierce competitor. Moix, 17, is a graduating senior at St. Joseph School in Conway.

"I'm really looking forward to playing in that game," she said.

Moix was presented the Father James Beagan Award from St. Joseph School recently. This award is the top honor for a senior female basketball player and is named after Father Beagan, who began the girls basketball program at St. Joseph in 1954.

"Jessie is a special young lady, a wonderful Christian and a great player," Chris Kordsmeier, girls basketball coach at St. Joseph School, said. "She is a good leader and a solid role model for younger students. She is very easy to coach and all coaches want a 'Jessie' on their team."

He also said she excels at all sports and is a true team player, putting the team first before seeking her own accolades.

Off the court, Moix takes her studies seriously, maintaining a 3.9 grade point average in addition to working a part-time job and being active in the Totally Awesome God Group (T.A.G.G.) at St. Joseph Church.

Moix is service minded as well and participated in the Faulkner County Youth Leadership Institute. She is a member of the National Honor Society and served as the Student Council president during the 2009-2010 school year. She also participated in Girls State in 2009 and was named Teen of the Month by the Conway Optimist Club.

While not completely decided on a field of study, she said she wants to do "something medical" and will focus on science at the University of Arkansas in Fayetteville, where she plans to attend this fall. Although she considered playing basketball at UA, she decided to focus her energy on her studies and enjoying the college experience.

"I would like to play intramural sports but don't think I want to be on the university team."

When asked how her faith has helped her with managing her activities, Moix said, "My faith is very important. When I'm stressed out or in trouble, I just stop and pray. I go to adoration. It is a pick me up and helps me keep everything in control."

She said the T.A.G.G. has served as an anchor for her by providing many faith-building activities, including praise and worship as well as community service projects.

In her free time, Moix enjoys reading, working on puzzles with her boyfriend and hanging out with her friends.

Moix said she will miss her friends and especially her sister, Heather, 16, when she moves off for college. She and her sister have been teammates this year on the basketball team.

Her parents are Brent "Bubba" and T.J. Moix, who are also graduates of St. Joseph School. Jessie also has an older brother, Tucker, who is 19.

"When you hear from other parents and coaches of other teams that they love watching your daughter play and respect her sportsmanship on the court, that makes you proud," T.J. Moix said.

See more news about sports in Catholic schools on the monthly "Good Sports" page, only in