Father Murrin heard the call of God from early in childhood 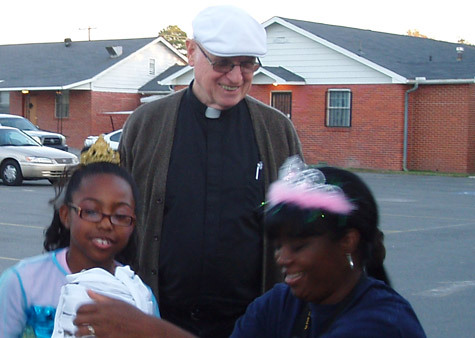 In first grade, multiple hands shot up when their pastor asked the children about vocations. Over the years, he said he watched the number dwindle. But his hand always remained steady.

"I never changed my mind," he said. "No one was surprised that I became a priest."

Father Murrin grew up in Greenville, Pa., which is five miles from Ohio. His mother died when he was only 2 years old, so his aunt helped his father raise him and his brother. His father later remarried, so Father Murrin also has four half-brothers and four half-sisters.

When he wanted to enter the seminary at 13 years old, his father said he was too young. His brother, Nelson, proposed a solution. He too would go to the seminary.

His brother was a year older than Father Murrin but missed a year because of rheumatic fever, which put the two in the same grade.

"At the time, I didn't give it another thought other than it meant I could go," Father Murrin said. "He made that sacrifice to go with me even though he did not have the desire to become a priest. Without him, I would not have gone."

He has served at predominately African-American parishes from Chicago and St. Louis to Mississippi and Arkansas.

"I always wanted to be in a black parish -- the humanness of it and the beauty of it -- my heart was taken with the parish," he said. "It is a beautiful place to be. It's been a wonderful experience. It's focused my spirituality. I feel very much a part of this faith community."

St. Peter Church also has a school where Father Murrin teaches phonics to kindergarteners. The parish has both English and Spanish Masses on Sundays.

He learned Spanish because a parishioner planned to take a class, so he also decided to go. The parishioner didn't show up for the classes, but Father Murrin did.

"What I like to look at are the times God touched my life and gave it the direction he wanted. These epiphanies weren't the strong heavy winds rending the mountains and crushing rocks -- or the earthquakes or fire, but Elijah's soft, gentle breeze," he said in a homily in April about his 50 years as a priest.

After celebrating his 50-year jubilee, Father Murrin said he is still ready to follow God's call.