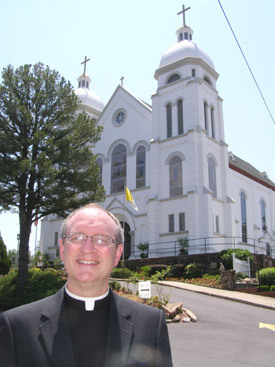 HOT SPRINGS -- This year that marks the silver anniversary of the ordination of Father James West now will have a gold tone to it.

In August, Father West will return to service under the gold-topped domes of the Church of St. John the Baptist in Hot Springs to serve as its pastor once more.

"(He is) affable, caring, holy," said Isabelle Peregrin of Hot Springs, a longtime member of the parish and the community. "I'm happy to have him back."

"Delighted!" is what Emma Lou Hotho said she and her husband, Steve, feel about Father West returning.

Their private St. Stephen's Charitable Fund to help disadvantaged youths in the Ukraine couldn't have gotten off the ground like it did without Father West's encouragement during his mid-1990s pastorate there.

"He_was great," Steve Hotho said, "with working with the school kids. He's a gentle man, but strong. He's not afraid to do the right thing."

Father West, 50, was raised in Texarkana and ordained in 1986 by Bishop Andrew J. McDonald. After ordination, Father West served at the parishes of Christ the King in Little Rock, St. Boniface in New Dixie and its missions in Oppelo and Little Italy, St. John in Hot Springs and, most recently, Immaculate Conception in North Little Rock.

In a sit-down interview with Arkansas Catholic, Father West said the idea of being a priest and the actual service in the priesthood has more than exceeded his hopes.

"It's turned out better than I thought it would be," he said, "It's been a far greater joy than I imagined. I can't imagine one could be happier in life."

Of course, he knew the priesthood would be a life of being on call.

"I don't think there's been any surprise there," he said, with a grin.

Some of that greater joy he described comes from Scripture passages that have stuck with him through the years. One of his favorites may be found in Psalm 18, verse 2: "I love you, Lord, my rock, my fortress, my deliverer, My God, my rock of refuge, my shield, my saving horn, my stronghold!"

"The knowledge that God is the one we must lean on -- that we can't do anything of any real value, apart from Him -- inspires me," Father West said.

It is that inspiration that parishioners at St. John will come to appreciate. The makeup of the church community has changed a little since his last term of service. There are many more Hispanics at St. John's than a decade ago.

Father West will be eager to greet and meet them: he arrives able to speak conversational Spanish.

Of note, Father West also can read and write Korean. He has celebrated Mass in Korean and that will continue even though he will live in Hot Springs. Twice a month, he will return to Immaculate Conception in North Little Rock to celebrate Mass in Korean for Catholics of the Little Rock area.

One change soon to come will affect more than Catholics at St. John, and that is the revisions of the Mass prayers.

As a person sensitive to language and its meaning, Father West said he thinks the changes will be good for the church community.

"I'm just glad that we are moving toward a more elevated manner of our responses to God at Mass," he said. "The wording of the Mass responses will be more clearly sacred."

For now, he is focused on preparing to leave Immaculate Conception Church.

"I am sad to leave my parish because I always am (sad about leaving)," Father West said, "but I am thrilled to be returning to St. John's. I think it's a tremendous blessing. I couldn't be happier and I love the people of St. John's. I love Hot Springs."