Long life of service begins at and leads to Marylake for jubilarian - Arkansas Catholic - June 16, 2012 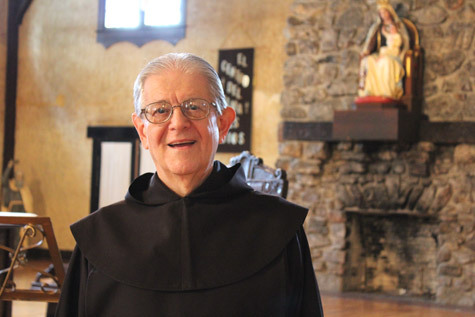 Dwain Hebda
Father Sam Morello, OCD, superior of Marylake Monastery outside Little Rock, celebrated his 50th anniversary as a priest on April 29. His education began as a Carmelite 60 years ago at Marylake.

Dwain Hebda
Father Sam Morello, OCD, superior of Marylake Monastery outside Little Rock, celebrated his 50th anniversary as a priest on April 29. His education began as a Carmelite 60 years ago at Marylake.

On a still morning at Marylake Monastery a short drive southeast of Little Rock, superior Father Sam Anthony Morello, OCD, leads the visitor into the foyer and taps the glass on a black and white photo. A silver engraved plaque dates the picture July 25, 1952.

"He's gone, he's gone, he's long gone," said Father Morello, ticking through the distinguished friars and grinning Knights of Columbus in the photo, all robed in their finest underneath what looks like a baking Arkansas summer sun. In the front row is a thin, dark-haired youngster who looks more like an altar boy than a future priest destined to travel the world over five decades in the service of God and his fellow man.

He glances at the lad then says matter-of factly. "And there's me."

Father Morello arrived at Marylake as a novitiate of the Carmelite fathers just two weeks after graduating high school in his native Houston, Texas. The descendant of Sicilian immigrant grandfathers on both sides, Father Morello saw daily examples of intense and devout faith throughout his formative years.

"My maternal grandfather John Paul Vivano was the most devoted to the blessed Virgin Mary of anyone you'd ever seen," he said. "He'd pray the rosary every night, on his knees with arms extended. I'd kneel behind him and pray, but I couldn't keep my arms extended like that."

Such examples, including his father's work to help launch a new parish in his hometown and serve as its resident lay minister, had a big impact on the young Morello. By high school he was bound for a life of vocations, starting in Arkansas and culminating with ordination at St. Mary Major Church in Rome on April 29, 1962.

It was a heady time to be present at the seat of Catholicism. Just six months later Pope John XXIII would convene the Second Vatican Council. Newly minted though he was, Father Morello knew he was in the center of a monumental event, one that he and his fellow priests would be charged with carrying with them to the far corners of the earth.

"It was a big surprise and while it wasn't something that was at all clear at the time, as far as we could tell it was about to bring more than just a breath of fresh air to things," he said. "Soon we could tell we were experiencing something quite special."

Adding to Father Morello's excitement over what was happening was the election of Pope Paul VI who continued the council following Pope John XXIII's death on June 3, 1963.

"Paul VI was my idol," he said. "I didn't get to meet him like I did John XXIII or John Paul II, but during my 12 years in Rome I followed him around and read everything he wrote. He was 'The Man' to me."

In many ways, Father Morello's life as a priest mirrored that of his ecumenical hero. As the pontiff sought greater openness and dialogue, so too did Father Morello encourage the same in the three decades he spent teaching at the University of Dallas and Dominican College and University of St. Thomas in Houston.

"I am no scholar, I am a popularizer," he said. "I study a lot and all my life I have tried to learn."

In 1986 Father Morello was called to Rome by the General Council of his order. For the next five years he was dispatched to Carmelite communities from Malta to Australia and Hong Kong to England, assessing communities, addressing problems and ministering to their needs.

By 1991, he was sent back to the United States largely to recuperate from the years of globetrotting. He then served in San Antonio and New Orleans before returning to the quiet confines of Marylake. Just a month shy of his 78th birthday, he looks back on his faith journey with humility and humor.

"I always wanted to be a priest among the people, not stuck in a rectory somewhere," he said. "I have no idea where I am headed, but I am so glad to still be here."