Little Rock’s Jack Dallas has yet to meet a stranger 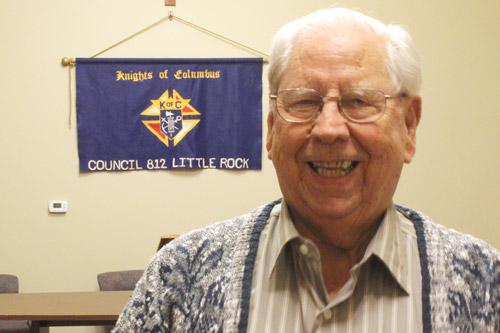 Dwain Hebda
Jack Dallas share a laugh at a recent meeting of Knights of Columbus Council 812 in Little Rock.

Dwain Hebda
Jack Dallas share a laugh at a recent meeting of Knights of Columbus Council 812 in Little Rock.

Why you want to know Jack: In the dozen years he spent in the restaurant business managing The Embers, a famed Little Rock steakhouse, Jack’s sense of hospitality set a welcoming tone for his customers. In the 35 years since he converted to Catholicism, he’s been a similarly welcoming presence through the Knights of Columbus and in his multicultural parish.

Arkansas Catholic’s theme this year is “Arkansas Catholic delivers a year of faith.” What have you done or plan to do to strengthen your faith this year? The return of Father (Warren) Harvey has added a sense of unity to Good Counsel. Years ago when he was here as assistant pastor he was very popular. He was the one who came up with the nickname the “Stained Glass Parish” because we have so many ethnic groups represented. We’re very proud of that diversity.

What prompted you to want to become Catholic? When Julia and I married, we agreed that our kids would be raised Catholic. My wife was always very strong in her beliefs and she was very strict about the kids going to church. I belonged to the Methodist Church and one day I just decided it didn’t make sense to split up on Sunday and so I converted. I’m glad I did, it completely changed my spiritual life.

A lot of people know you from Knights of Columbus Council 812. How long have you been active in that? Oh golly, since 1981.

What is it about the group that has kept you active all these years? (Jack is a fourth degree Knight and has held nearly every council office.) I’ve often thought about it. There’s not many places you can go where you can sit around with a bunch of men and pray. We pray the rosary and we do work for charity and it’s a good time.

Is there something you are particularly proud of that the Knights have accomplished? At our sausage supper every year, we take up a collection for Helping Hand here in Little Rock to help them out. I’m proud we can do that for them every year. During my time as grand knight, we had a building downtown. It was getting into disrepair and was taking more and more money in upkeep. I spearheaded a group to get it sold and it gave the council a nice nest egg.

There may have been a few at the time who disagreed with that move, but I believed that once you started begging members for repair money you’d lose them. So, I believe that in selling that building we saved the whole council from becoming extinct and there are a lot of people who would agree with me.

One thing I’ve always noticed about you is how easily you can talk to just about anybody. I’m a people person. It really blossomed in the restaurant business where I knew all of my customers and they knew me. My kids were always a little embarrassed by it. My daughter said once, “Daddy, it’s like you never met a stranger.” I just enjoy it.

Does the fact that you and Pope Benedict are about the same age help you relate to his decision? Oh yeah, I sure can. You know, I worked until I was 80 and then one day I just felt like it was time to turn things over to a younger person. I’m sure he feels the same way. I can definitely sympathize with him.