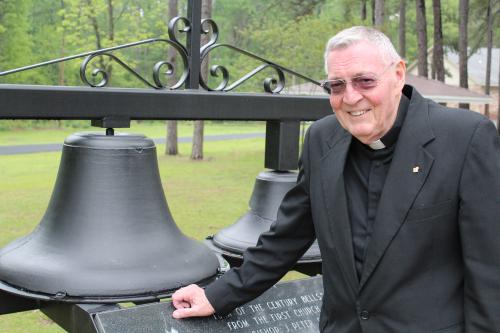 Dwain Hebda
Father Richard Davis, pastor of St. Boniface Church in New Dixie, will celebrate his 50-year jubilee May 18. A native of Jonesboro, he credits listening and a sense of humor for his longevity.

Dwain Hebda
Father Richard Davis, pastor of St. Boniface Church in New Dixie, will celebrate his 50-year jubilee May 18. A native of Jonesboro, he credits listening and a sense of humor for his longevity.

If you don’t get through to Father Richard Davis on the first try, treat yourself to listening to the answering machine message. After running through the Mass schedule, Father Davis’ smooth voice wisecracks, “If you don’t mind talking to this blasted machine, please leave a message.”

Father Davis has a thing about answering machines. And Twitter, for that matter, and text messaging and e-mail and anything else that dilutes the human connection upon which rests his longtime ministry. He said if there’s one thing that five decades in the vocation has taught him, it’s the value of listening.

“I don’t have good hearing to begin with and so I have always had to pay very close attention when people are speaking,” he said. “I think that’s important. Everybody is in such a hurry today. The ability to listen to someone who wants to talk to you, I don’t think we do enough of that.”

Father Davis, pastor of St. Boniface Church in New Dixie (Bigelow), St. Francis of Assisi in Little Italy and St. Elizabeth in Oppelo, will observe his 50-year jubilee May 18. He first listened to God’s call during his formative years at Blessed Sacrament School in Jonesboro where as an altar server he observed the priests’ kindness and helpfulness.

“It seemed like they were always there for somebody who needed help and so I thought I would give it a try,” he said. “My parents were driving to the horse races in Hot Springs when I asked them if they minded if we went by St. John’s (Seminary) to see what was involved if I entered the seminary. They said they would be glad to do that.”

Father Davis had previously visited the Little Rock seminary but when he arrived in fall 1955 for what would be an eight-year path to ordination, he was shell-shocked as countless other college freshmen learning to cope with being away from home.

Father Davis was ordained in May 1963 by the same man who confirmed him 18 years before, a circular faith journey of which he quipped, “Bishop (Albert L.) Fletcher slapped me in the face when I was 9 and put his hands on my head when I was 27.”

He was given 12 different parish assignments in his first 20 years as a priest.

His next assignment was his first as pastor, at St. Elizabeth Church in Eureka Springs; then on to St. James Church in Searcy, St. Albert Church in Heber Springs and St. Richard Church in Bald Knob. While there, he famously celebrated Mass for the faithful in Beebe using a Baptist church in months with a fifth Sunday.

From Searcy he went to St. Paul Church in Pocahontas, St. John the Baptist Church in Engelberg and St. Joseph Church in Corning; then to St. Mary Church in Paragould, which then attended a church in Piggott. In 1996 he arrived at St. Boniface.

Adapting to that many moves helped Father Davis develop flexibility and a sense of humor, which he said are keys to a long and successful ministry.

“People will give you a headache if you let them, so you either have to meet them with a sense of humor or two aspirin,” he said. “Regardless, you can’t just not discuss things with them, you gotta be the shepherd.”

Another habit that’s served him well is keeping homilies short and sweet. Not that he’s at a loss for what to say, in fact, he’s constantly surprised at how Scripture continues to inspire even after all these years.

“You know, that’s what’s amazing to me,” he said. “After 50 years of reading the same Gospel, I still find something new to say about it. It never gets old.”