Polish-born priest began ministry in era of Soviet rule, came to U.S. in 1972 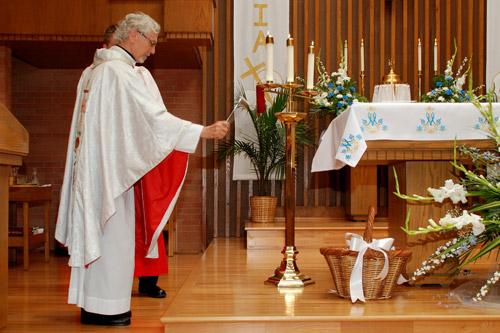 Father Stan Swiderski, who retired June 11, blesses the gifts during confirmation Mass at Mary Mother of God Church in Harrison in November 2012.

Father Stan Swiderski, who retired June 11, blesses the gifts during confirmation Mass at Mary Mother of God Church in Harrison in November 2012.

Many priests tell of surrendering to the call of Christ, of accepting the life of vocations with meekness. Not many describe the priesthood as an act of defiance. But then, not many have walked the path of Father Stanislas Swiderski, 73.

Coming of age in the ruins of post-World War II Poland, Father Swiderski was surrounded daily by reminders of the price of being overtly Catholic.

“I suppose my becoming a priest was in some ways a rebellious act against the Communists,” he said. “I did not feel fear, instead I think this was more a challenge. I saw myself as joining the ranks of the people of Poland who were the foundation of the Church. I regret my decision not even for one moment.”

Father Swiderski, who retired as pastor of St. Peter the Fisherman Church in Mountain Home June 11, said following his vocation at age 16 was also asserting his independence from his father, Joseph. Theirs was a sometimes-complicated relationship, made more so by Father Swiderski being the only son of the family and Joseph missing much of Stanislas’ childhood.

“My father was in the Polish army and in 1945 it was the first time that he met me and I met him,” said Father Swiderski, who was born in October 1939. “After that he was a professor who was very outspoken against the communist regime. Sometimes too much.”

In 1950, Joseph Swiderski’s dissident views landed him in prison, accused of being a spy. When he emerged five years later, his son’s path in life was set.

“My hometown priest was truly a man of tremendous faith, and I wanted to imitate him,” he said. “It was the dream of my mother that I become a priest. My father originally objected, but we reconciled over it.”

Father Swiderski entered the seminary in 1956 and was ordained Oct. 11, 1963, just four days past his 24th birthday. He settled into the daily routine of ministering to the faithful and while he didn’t suffer direct persecution as a priest, things like traffic restrictions reminded him of the religious choke chain the Soviets held on the Poles.

Still, one of his earliest lessons was that official ideology and actual practice were often very different things.

“There were a number of high-ranking Communist officials, we called them radishes,” he said. “They were red on the outside and white on the inside. We would have parish missions or Lenten retreats, and there would be hours and hours of confessions. The leaders would usually come at night to make theirs so people didn’t know what they were doing. We called them Nicodemuses because of how he came to see Jesus at night.”

As much as he drew strength for his vocation from the devout, Father Swiderski also took note of those who received sacraments under cover of darkness. Rather than condemn them as hypocrites, he took hope from their example.

“I didn’t have hatred towards (the Russians) at all,” he said. “I always had the feeling that they were brainwashed in some way and that their leaders were trying to dictate their beliefs to them. The general feeling was sooner or later this was all going to collapse. That’s one of the reasons that people flocked to the Church and filled it to capacity.”

A landmark moment in his priesthood occurred in the late 1960s when Father Swiderski had the opportunity to study under Cardinal Karol Wojtyla at the Catholic University of Lublin. He remembers students flocking to the man who would become Blessed Pope John Paul II, as approachable and kind as he was brilliant in the classroom.

“He was charismatic, but not in an ostentatious sense. It was more the strength of his personality,” he said. “He was an inspiration in showing how much it meant for him to be with people. For me, it re-set my priorities as a priest and from then on my agenda was clear. I was to be available to the people for whatever they needed.”

He never forgot that lesson; in fact, when the pope died in 2005, several of Father Swiderski’s Mountain Home parishioners offered to pay his expenses to attend the funeral. He declined, preferring to shepherd his parish through their mourning because, “that would be (Pope John Paul’s) wish.”

Such gestures have not gone unnoticed; but lend to Father Swiderski’s falling in love with St. Peter the Fisherman Church, to which Bishop Andrew J. McDonald assigned him when he came to Arkansas in 1993. Even though he had already been in the U.S. for more than 20 years — arriving in 1972 in response to a call by the Savatorian Fathers in Chicago and northern Indiana for volunteers to work in mission parishes and help get a Polish-language radio program off the ground — it wasn’t until Arkansas that America became truly home.

“A friend was familiar with the Diocese of Little Rock, and he told me about Bishop McDonald,” Father Swiderski said. “He said, ‘You know, they have Polish families in Arkansas, and they have a shortage of priests. You should contact the bishop.’

“So I wrote him a letter,” he said, adding with a laugh, “and he responded the very next day after he got it.”

Except for five years at St. Mary Church in Batesville, Mountain Home has been just that, even more so than his native country. He was incardinated as a priest for the Diocese of Little Rock on June 30, 2000.

With the 50th anniversary of his ordination approaching in October, Father Swiderski said he is looking forward to retirement, surrounded by his books and the people who have been so gracious to him.

“I love my priesthood,” he said. “I love preaching, hearing confessions and helping people with their problems. I have been led by the Holy Spirit, and I have very many sweet memories here of people who have been so very kind.”