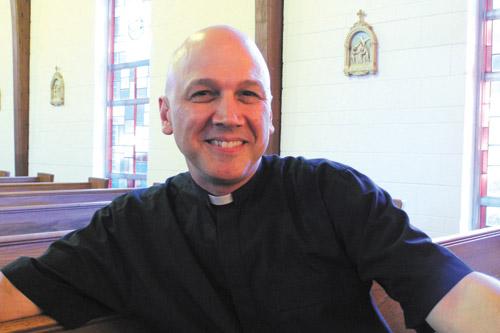 Dwain Hebda
Father Charles Thessing in the sanctuary of St. Michael Church in West Memphis. The Conway native said his 25-year jubilee wasn’t a big deal because “I’m not finished yet.”

Dwain Hebda
Father Charles Thessing in the sanctuary of St. Michael Church in West Memphis. The Conway native said his 25-year jubilee wasn’t a big deal because “I’m not finished yet.”

WEST MEMPHIS — On a spring day in 1988, a restless seminarian fidgeted before his ordination Mass. Moved by the moment, he approached the bishop — soon to lay his hands on him to continue the line of St. Peter — to speak what was in his heart on that solemn day.

“I asked Bishop (Andrew J.) McDonald if he hit me with his crosier, would I get a ‘staff’ infection,” giggled Father Charles Thessing, who last year took over as pastor of St. Michael Church in West Memphis.

“I was really nervous and when I get nervous I tell stupid jokes. Bishop McDonald looked at me and said, ‘I’m having second thoughts about you.’”

Given the number of times Father Thessing had second thoughts about becoming a priest in the first place, the bishop’s snappy comeback especially fit. Father Thessing’s vocation did not come easily, but time has showed him with as many seats to be filled at the Lord’s table, there’s room for all — including a former frat boy with the heart of a musician and the soul of a shepherd.

“This is my life, this is where my heart truly is,” he said. “It’s not for everybody, but I really enjoy what I do.”

He grew up in St. Joseph Parish and attended St. Joseph School in Conway, educated throughout by the Sisters of St. Joseph. He didn’t encounter a “burning bush moment” over vocations, but one episode from high school sticks out.

“I remember a classmate telling the sister, ‘You don’t love us’ over something,’ he said. “She went absolutely ballistic. ‘How dare you say that I don’t love you! My whole life is about you!’ I remember thinking, that’s what vocation is.”

It would be a while before he returned to such thoughts. In the interim, he attended the University of Central Arkansas, where he studied music — among other things.

If that didn’t cast doubt on his future in the priesthood, his first seminary experience would. Diocesan vocations director Father Joseph Correnti convinced him to give Holy Trinity Seminary in Dallas a try in 1983, an experiment that resulted in school officials throwing him out in 1985.

“Their exact words were, ‘You don’t fit into this world’ and I didn’t,” he said. “It’s changed since then, but at the time it was a very French cuff, elitist kind of place. Frankly, I’m glad I was rejected from that.”

That should have been the end of it, but Father Correnti urged the headstrong, independent thinker to try St. Mary Seminary in Baltimore. It proved a better fit, though not without rough patches. In hindsight, he said moments of doubt about his vocation were often just a prelude to profound clarity.

“We’re all in the same boat. It’s a flawed Church, a human Church and I’m a flawed person. But it will be OK,” he said. “I once said to one of my advisors, ‘I don’t think I’m called to be a seminarian.’ He said, ‘Good. That means you’re called to be a priest.”

Following ordination on May 28, 1988, Father Thessing began the real-world education all new priests go through. As associate pastor in retiree-heavy Mountain Home, he learned to appreciate the collective wisdom of his elders; then to Camden and Magnolia, where he built a new church and learned, primarily, “I never want to build anything again.”

St. Jude Church in Jacksonville was a favorite, thanks to nearby Little Rock Air Force Base bringing into town people who had lived all over the world, creating an eclectic congregation. His next assignment — Sacred Heart in Morrilton which he served for 13 years — would teach him the challenges and advantages of a parish school.

It was also at Sacred Heart that one tributary of his journey came full circle from high school. A nun in a classroom — this time, Sister Rachel Auringer, OSU, school principal — once again illuminated his calling.

“She had a great impact on me. She had this poster in her office that read in 100 years, no one will remember your name or your bank account, just that you touched a life,” he said. “I try to touch people today and be the pebble in the pond creating ripples that impact their lives. That’s what people are going to remember.