Students can fish for fun, learn what it takes to be a professional fisherman 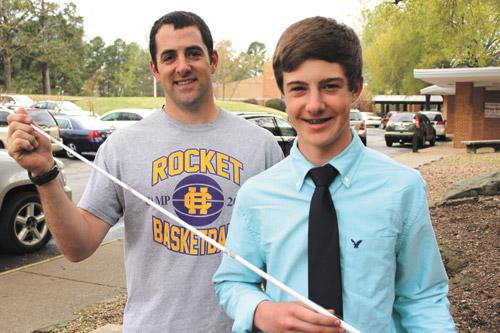 Dwain Hebda
Bass Club sponsor Todd Ezzi checks out member Hunter Keeling’s competitive-grade rod and reel. Keeling is one of about 15 amateur anglers that made up the CHS club this year.

Dwain Hebda
Bass Club sponsor Todd Ezzi checks out member Hunter Keeling’s competitive-grade rod and reel. Keeling is one of about 15 amateur anglers that made up the CHS club this year.

Hunter Keeling is a young man of few words, especially when he’s just been asked a question which strikes him as painfully obvious: Why fish?

Keeling catches fish for the same reason Catholic parishes fry them up on Fridays in springtime — it’s part of who he is. But it’s also a way for the Rocket freshman to connect with classmates and compare angling skills thanks to the Catholic High Bass Club, a competitive fishing group that’s been around since 2005.

“I’ve always enjoyed fishing, and I like that we have tournaments,” Keeling said. “I’ve met a lot of new kids fishing. It’s something we can all do together.”

Todd Ezzi, Rocket basketball coach and club sponsor, said about 15 boys participated this year, mostly underclassmen, of which about half fished regularly in the group’s sponsored intrasquad tournaments.

“One of the things you get with fishing is patience and commitment, and I think some of them kind of use it as an escape, just want to go out there and fish.” Todd Ezzi, club sponsor

“Most of the guys have been fishing before, but we do get several every year that don’t have much experience,” Ezzi said. “One of the things you get with fishing is patience and commitment, and I think some of them kind of use it as an escape, just want to go out there and fish.

“For others, it’s a little bit more competitive. Some of them want to have a future in fishing, have a college career and even aspire to be professional fishermen.”

Dan Smith, principal of Immaculate Heart of Mary School in North Little Rock (Marche), who taught at Catholic High from 1996 to 2010, founded the club after stepping back from assistant coaching duties with the Rocket basketball team.

“After I stopped coaching I still had a lot of ambition to be active with the kids and try to do something that got them into nature,” he said. “We got started as an event that got fathers involved with their sons during what is a really difficult time in high-school-age kids.”

Smith dove into the activity like an eight-pounder after crankbait. He found ready accomplices in other Catholic High dads and cajoled local retailers into deals on fishing lures, which he brought by the bucketful to the group’s first outings. While informal by today’s standards, the contests were on the vanguard of the sport among Arkansas high schools.

“This is before bass fishing really got popular with the high school and the college level,” Smith said. “We were on basically the cutting edge.”

Smith eventually developed a point system whereby club members kept a running tally of their catch during the course of the year, resulting in top overall angler honors. He also registered the club with the amateur division of the Forrest L. Wood competitive fishing organization, giving every card-carrying member of the club the chance to fish in a state tourney.

Meanwhile competitive fishing was growing up fast and Arkansas was at the center of it as a competitive venue and as a spawning ground for talent. Top professional fishermen are floating rock stars, bringing in prize money, seminar and appearance fees and most of all, lucrative sponsorships from various companies marketing everything from boats to bobbers.

Colleges also started getting in on the game and again Arkansas led the way. In 2012, Arkansas Tech University in Russellville won the Association of Collegiate Anglers’ first School of the Year honors in a field of 159 college teams; three years later the roster of schools is nearly twice that. Through the years, former club members have fished for the University of Arkansas in Fayetteville, Arkansas Tech and others.

Michael “Mookie” Miller, class of 2008, was one of the elites. Miller, a 2015 Catholic convert who attends Immaculate Conception Church in North Little Rock, was among the handful of boys making up the club that first year and went on to fish for the University of Arkansas.  His college teammate and competitive partner, Kyle Billingsley, was another.

“We were kind of competitive foes back (in high school),” Miller recalls. “But we did well as a team; we had a pretty good college career.”

“I personally love the sport and would do anything to help it grow,” he said. “It’s getting bigger and bigger every year; high school fishing is blowing up and the college sport is blowing up as well. There’s tons of opportunities, and I’m helping guys by opening up their eyes to where it could go whether they want to pursue it as a career or as a hobby.”

One of the youngsters benefiting from Miller’s experience is Alex Smith, Dan’s son and a CHS freshman. The young man said he’d encourage any of his peers to give the club a try.

“My very first tournament on the Arkansas River, we caught a lot of fish and I caught my biggest bass,” he said. “I feel more people should give it a try. It’s a lot of fun. What I enjoy most about it is hanging out with my friends and being able to fish with my dad a lot more than we used to.”