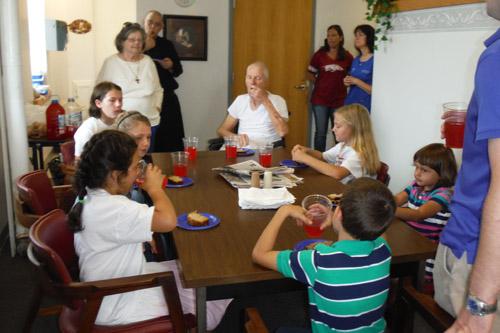 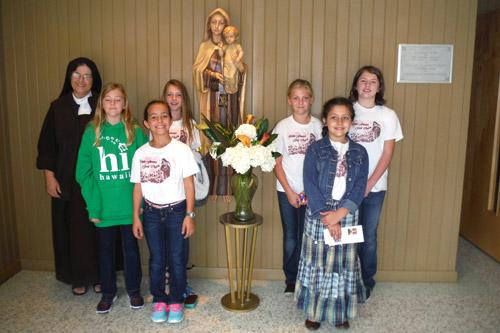 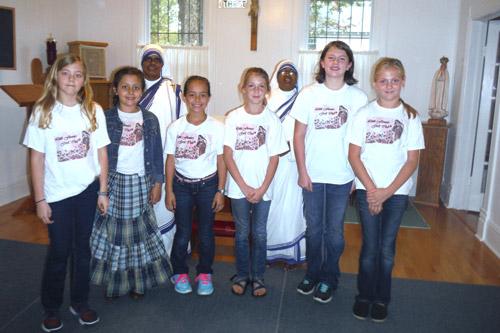 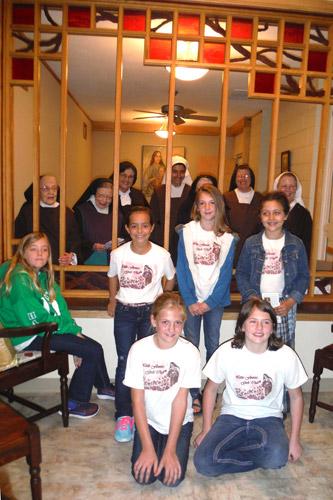 Though it is not yet spring, little flowers have been sprouting up at St. Anthony Church in Ratcliff since the fall. Instead of blooming new buds, they are blossoming in the virtues of the Catholic faith.

It’s all part of the Little Flowers Girls Club, a Catholic faith-based alternative to the Girl Scouts.

“The center of it is God and the virtues in the faith. Then from there, everything else blossoms,” said Little Flowers leader Marcela Stengel. “We cannot lead or guide ourselves without being centered in God … It’s hard with a secular program to be so focused in the faith. I want my girls and the kids to know you first seek God and then he will give you the grace to help others.”

Stengel started a Little Flowers chapter in 2014 when trying to find a group for 9-year-old daughter Maria Teresa that would not only promote service, but the Catholic faith.

The six girls, ages 9 to 11, meet once a week and follow along in a book provided by the national Little Flowers Girls Club organization. According to beholdpublications.com, the program has been around about 20 years and is rooted in teachings of the 1906 book “The Catholic Girl’s Guide” by Father F.X. Lasance and the spirituality of St. Thérèse of Lisieux, known as the Little Flower. There are close to 300 groups of Little Flowers and Blue Knights Clubs for Boys in the United States. There are also chapters in places like Europe and Australia.

According to representatives from Behold Publications, Ratcliff is the only active chapter of the Little Flowers Girls Club in Arkansas.

Girls, starting at age 5 to about age 12, study a different virtue every month. In order to earn a badge, they must study the saint with that month’s virtue, study the Bible, the Catechism and complete a service project.

This year, the Little Flowers are growing in courage, joy, wisdom, loyalty, perseverance and mercy, for the Year of Mercy.

“It’s important because they can see the needs of other people and not just ‘I need this, I need to be the center of attention’ … seeing people that need their company, that need a smile, someone to talk to. To know there are people around them that they can minister to,” Stengel said.

While they may be planted firmly in the faith, they’re hardly stuck in one place. The girls have visited several spots, including the monk’s infirmary at Subiaco Abbey and to the Carmelite nuns and Missionaries of Charity in Little Rock, where they brought baked goods they made.

“They still talk about going to Little Rock to see the sisters there,” said Shawna Stengel, whose two girls, Brittney, 11, and Hailey, 10, are Little Flowers. “They really enjoyed that.”

Brittney Stengel said she loves getting to know her fellow “flowers.”

“You get to learn about lots of stuff and you’re in a little group with kids your own age,” she said. “I want to keep on going as long as I can.”

Marcela Stengel said she recently gave the girls a Lenten challenge to do different acts of charity associated with each Station of the Cross. For example, for the sixth station where Veronica wipes the face of Jesus, two girls cleaned the home of Judith Weaver, a diocesan hermit.

“It was very nice of them to do that for her. They were cleaning, vacuuming and dusting. It’s not just sending a card. It’s being there for the other person,” she said.

Shawna Stengel said she’s seen her girls get more excited about the faith and service since joining Little Flowers.

“They didn’t talk much about saints or going out and doing things for people and now just seeing them doing that,” is something she loves, she said.

The girls, who Marcela Stengel proudly said “don’t miss class,” will go on a religious pilgrimage to the official diocesan Door of Mercy — which her husband Adam Stengel helped build — at Our Lady of Good Counsel Church in Little Rock April 2. They will also end the year in May with the annual mother and grandmother tea party, a favorite for the girls.

“I enjoy all working together to make the tea party,” Brittney Stengel said of last year’s event. “We made name tags for everyone we invited, we made the invitations. We each had to bring something.”