Alive in the Word is shorter, but powerful Bible study

Three-chapter books on trust, Mary are the first in new Scripture study program 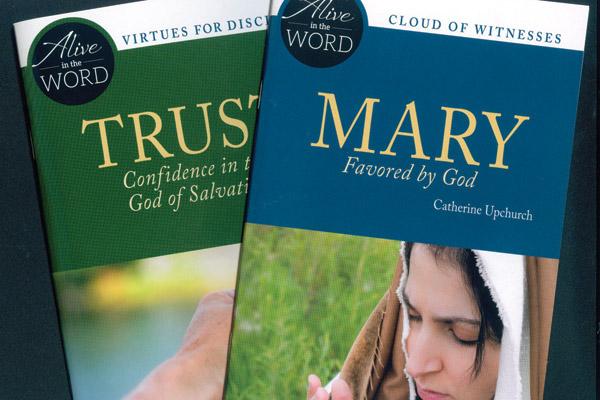 A new series from Little Rock Scripture Study, Alive in the Word, was announced May 16 with two titles, "Mary, Favored by God" and "Trust: Confidence in the God of Salvation."

A new series from Little Rock Scripture Study, Alive in the Word, was announced May 16 with two titles, "Mary, Favored by God" and "Trust: Confidence in the God of Salvation."

Little Rock Scripture Study is marrying Bible study, prayer and action into a new program written especially for those on-the-go parents and millennials.

The series Alive in the Word was announced May 16 with two titles, “Mary, Favored by God” and “Trust: Confidence in the God of Salvation.”  LRSS plans to release eight more titles over the next year. “Mercy: God’s Nature, Our Challenge” will be released in July that Catholics can study for the Year of Mercy.

Director Cackie Upchurch said the new series was created to address feedback that they got from current and potential customers who were looking for something more flexible and shorter. Each booklet includes three sessions that can be completed in 60 to 90 minutes each.

“Some people cannot join a small group that goes on for multiples weeks. They don’t have the time; they can’t make the time, particularly millennials,” Upchurch said. “If they want to study in a group, they can study in a group (with Alive in the Word) with a shorter commitment … Some people don’t join Scripture study groups because they don’t have time to do the study to prepare for the gathering. They want to be at the gathering but don’t have the time really to give that they would like to give to the study. This material can be used in a group, reading it together at the time of the group gathering.”

“Our goal is to focus very clearly on a small amount of Scripture, a manageable amount of reading, but with a powerful message that is easy to grasp.” Cackie Upchurch, director of Little Rock Scripture Study

While the emphasis in other LRSS series is biblical understanding and reflection, Alive in the Word has more of an emphasis on biblical spirituality, reflection and how to take action to apply the lesson in one’s life.

Benefits of the new series are:

Upchurch said Alive in the Word is very flexible so it doesn’t have to only be used in a parish setting. She said friends, neighbors, young adults, college students or parents could gather in their homes or schools to do the lessons together.

Upchurch said LRSS will continue to develop and update studies that users have come to love, but it believed it also needed to create a new series for Catholics who are looking for something more accessible.

“Our goal is to focus very clearly on a small amount of Scripture, a manageable amount of reading, but with a powerful message that is easy to grasp,” Upchurch said. “The materials are very manageable and each volume includes three ‘chapters.’”

Alive in the Word series is available online through Amazon, religious bookstores and at aliveintheword.org. E-books are also available.