Sisters of Mercy honored by hall of fame induction

Arkansas Women's Hall of Fame welcomes sisters, who have served the state for 165 years 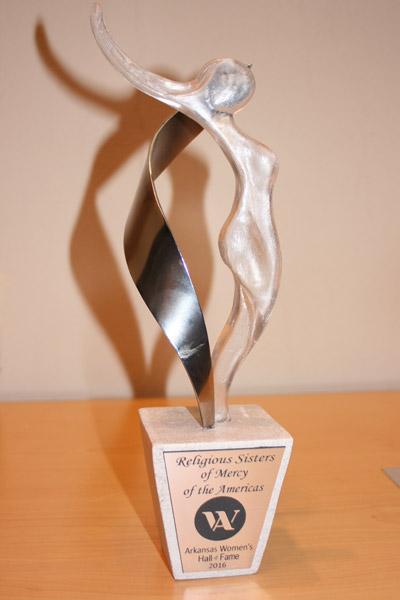 Aprille Hanson
Each of the honorees received a statue denoting their induction into the Arkansas Women's Hall of Fame.

Aprille Hanson
Each of the honorees received a statue denoting their induction into the Arkansas Women's Hall of Fame.

For the Sisters of Mercy of the Americas in Arkansas, mercy is not just a word, a pleasant way to describe an attitude. It has and always will be an action.

“As a religious community mercy means we’re merciful, compassionate and reach out to others in need,” Sister Judith Keith of Fort Smith told Arkansas Catholic.

On Aug. 25, the Sisters of Mercy were honored for that mercy as inductees into the Arkansas Women’s Hall of Fame for their 165 years of serving the state.

“For 165 years, hundreds of sisters have ministered all over the state of Arkansas to try to improve the quality of life of our citizens through education, through healthcare and through direct services to the poor and vulnerable,” Sister Judith said while accepting the award. “There is one thing though that we all agree. That no matter how committed we were, no matter how hard we worked, that without the support of the people, without the advice of the people, without the love of the people of Arkansas, our efforts would have been null and void.”

Short video presentations were shown for each honoree, detailing their legacy. While the Hall of Fame does not currently have a physical location, a display and the videos featuring all the honorees will be at the Old State House Museum in Little Rock until Oct. 2. An exact start date was not available at press time.

“You will see the video and can’t help but be impressed,” Nan Snow, Arkansas Women’s Hall of Fame board chairman, told Arkansas Catholic. “In a very quiet, unassuming way, they integrated in the state and local communities.”

The Hall of Fame, formed by the North Little Rock Chamber of Commerce and Arkansas Business Publishing Group, allows the public to submit nominations of women who have changed history in Arkansas. Selection is based on several factors including if the woman or group of women have opened new frontiers for women in society. Its first induction class in 2015 included Hillary Rodham Clinton, Daisy Gatson Bates and the Women’s Emergency Committee to Open Our Schools. In addition to the sisters, this year’s inductees were:

Snow said because there are so many potential honorees, the religious community being chosen the second years is special.

Since arriving in Arkansas in 1851, the Sisters of Mercy have established schools, hospitals and direct services to the poor in cities including Little Rock, Fort Smith, Helena, Rogers and Hot Springs. Their legacy includes:

While some communities may not agree with the Church as a whole, oftentimes the kindness of the sisters is the driving force of bridging that gap. Sister Judith shared during her acceptance speech the story of a man in El Dorado who had once said, “I won’t give those damn Catholics a dime. But you see this shirt? I’d give this shirt off my back for those sisters.”

“Mercy to them means we reach out where there’s need regardless of age or religion,” she said.

Gov. Asa Hutchinson spoke shortly about each of the inductees, saying “we appreciate the Sisters of Mercy and how they have demonstrated faith and charitable activities and have had such an incredible impact on my family and the community and the state of Arkansas.”

His wife Susan added, “I must comment on how the Sisters of Mercy has touched our life and that our youngest was born at St. Edward’s Mercy Medical Hospital with Sister Judith Marie (Keith) in charge, so thank you sister.”

In 1831, Catherine McAuley, a wealthy heiress, officially founded the Sisters of Mercy in Ireland to aid the poor. According to sistersofmercy.org, Sister Catherine spent her inheritance to open the first House of Mercy, a place of education and shelter for women in Dublin in 1827. The religious order grew throughout Ireland and England.

“There’s an analogy between what she did and what we’re trying to do -- a response to need,” Sister Judith said.

In 1851, the sisters came from Europe to a vastly different Little Rock than today. Sister Judith said the sisters were the first women religious to venture into what was then a frontier state.

The population is now almost 3 million, versus back then when it was “hovering around 200,000 for the whole state. Things have changed radically since we arrived,” Sister Judith said.

But their commitments have never wavered. During the Civil War, the women treated both Union and Confederate soldiers.

“If a guy came in bleeding, they treated them,” said Sister Jolitta Konecny, who lives at Mount St. Mary Convent in Little Rock.

At Mercy Hospitals, the focus is not only on mercy, but excellence, providing “cutting edge services” and care to patients, Sister Judith said. Those same values have also lasted at Mount St. Mary Academy.

Sister Deborah Troillett, who serves as a councilor of a five-member Institute Leadership Team for the Sisters of Mercy of the Americas in Silver Spring, Md., returned to Little Rock for the induction. Sister Deborah is a former principal and president of Mount St. Mary Academy.

“It’s such an opportunity to reflect on the legacy and courage” of the original sisters, she said. “We stand on their shoulders … We’re so blessed to be able to continue” the work at the Mount.

“In the Year of Mercy to have the Sisters of Mercy receive this honor, it gives me chills,” Sister Deborah added.

Sister Jolitta, a graduate and former assistant principal, said the MSM has always been “a school that prepares women” to find their place in a working society.

In recent years, the Sisters of Mercy have taken their calling even deeper into pastoral care, including outreach to the parishes, housing ministry and outreach to the Hispanic community, teaching children how to read English, Sister Judith said.
“It’s those little babies,” said Sister Rebecca Hendricks of why she enjoys working with the Hispanic children. “They put their arms around you and you just get close to them.”

Sister Lisa Atkins, of Rogers, who along with others in the community helped found the 8th Street Motel Ministry in Rogers which aids the homeless, said the spirit of the ministry is building off of the foundation that founder Venerable Mother Catherine McAuley wanted for the Sisters of Mercy -- to help the poor.

The induction not only celebrates the legacy of the Sisters of Mercy, but the work they continue to do today which will hopefully inspire other women to consider vocations, Sister Hendricks said.

“They see we’re vibrant. We’re not just in the chapel praying all the time but that’s important,” Sister Rebecca said, adding that the sister’s main priority is to address “the needs of those in the state.”

Sister of Mercy leading interfaith place of prayer in LR