Hot Springs pastor gives thanks to Jesus, Mary for 25 years

Father Y.C. says he has enjoyed ministering to parishioners from 'womb to tomb' 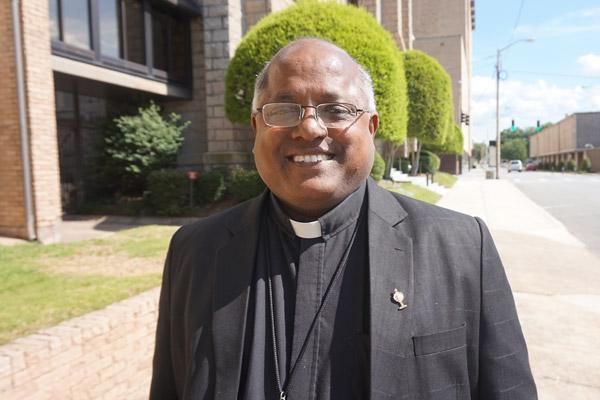 “I was thinking in 1975, calculating when I would be doing my philosophy, when I’d be doing my theology, ‘OK 1992 it will be my ordination, God willing. I hope I will survive,’” the pastor at St. John Church in Hot Springs said. “All along I never had any doubt that I would become a priest. I was sure. This is the line I’m going to follow. Somebody asked me, ‘What would you have become if not for a priest?’ I said, ‘I would have become a professional soccer player.’ I was good at sports.”

The soccer world missed out, but Arkansas Catholics have been blessed by the ministry of “Father Y.C.” He celebrated 25 years of priesthood May 6.

His family is from an entirely Catholic village in southeast India. But when his father was transferred as a Catholic school principal, they moved to a town that was predominantly Hindu.

Following the priestly example set forth by uncles and cousins, Father Y.C. traveled more than 200 miles to attend St. John Minor Seminary in the Diocese of Nellore and learned a new language. Today, he knows English, Spanish and three Indian languages.

As a young priest in India, Father Y.C. served as a pastor and in ministries including vice rector of St. John Minor Seminary, director of St. Peter Boarding Home for Boys in Nellore, deputy director for diocesan schools and prison ministry.

“My motto is ‘bloom where you’re planted.’ What you are given, I take it, the responsibility and do it until I achieve the new goal,” he said.

But when he was asked in 1999 to “bloom” nearly 14,500 miles away in Oklahoma, he did not believe it. Over six years, Father Y.C. served in three Oklahoma parishes. In 2003, he was able to visit Rome, a bittersweet memory, as it was the last time he would see his sister, Sister Paschal Mary, and meet Pope John Paul II. Living with the Bethlemite Order in Rome, his sister accidentally fell from a window and died Aug. 8 at 43 years old.

“We used to talk almost every other day … That was one of the saddest moments in my life,” Father Y.C. said. “The good thing is I was with her in July … She met (Pope John Paul II) on July 4, I met the pope on July 3. It was a wonderful experience … the pope said, ‘Oh here comes the priest’ and he gave me his rosary, which I still have. I treasure it.”

While in Oklahoma, he met fellow priest Father Anthony B. Taylor, who was vicar for ministries, which included overseeing international priests for the Archdiocese of Oklahoma City.

He returned to India in 2005, but when Father Taylor was named the bishop of Little Rock he requested Father Y.C.’s return to the U.S. to serve in Arkansas. In 2013 he was named pastor of Our Lady of Fatima Church in Benton. In February, Father Y.C. became pastor of St. John Church in Hot Springs, where he celebrates six Masses on any given weekend — five regular Masses and then perhaps a quinceañera, wedding or funeral. This is in addition to visiting the sick, eating meals with parish groups, attending school board meetings or even going crappie fishing with parishioners.

“Celebrating Mass and being with the people,” Father Y.C. said is what he enjoys most, ministering from “womb to tomb.” “I’m happy as a priest, that God has chosen me.”

Father Y.C. has visited almost 30 countries and many Marian shrines. It is fitting that his 25th jubilee falls this year because in October, he will be in Portugal for the centennial anniversary of the apparitions at Fatima.

“It’s first of all kind of thanksgiving to mother Mary, for all the blessings, for the intercession, that she has interceded for me, for answering my prayers. And also to bless me more and more in the coming years to be a good priest,” he said.