Some parish names honor events in Mary's life, such as Assumption 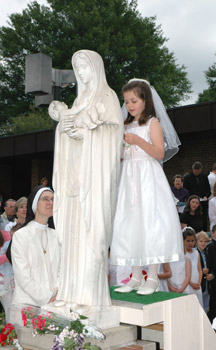 If one wonders how important Mary is in the Church, one can clearly see that she has a place of prominence in our parishes. One out of four Catholic churches in Arkansas is dedicated to the Virgin Mary.

Thirty-one churches or 25 percent are called St. Mary or some other name for Jesus' mother. Most common, of course, is the simplest title. Twelve churches from Altus to Plum Bayou are named St. Mary.

Why are so many churches named after the Blessed Mother? Msgr. David LeSieur, pastor of Our Lady of the Holy Souls Church in Little Rock, said because Mary is a mother and comforter is probably the reason many churches chose a Marian name over one dedicated to Jesus or a saint.

"We have always looked at Mary as a mother figure who can mediate for us," he said. "We call the Church mother. Mary is the mother of the Church. Jesus is a masculine figure. Mary kind of brings a feminine aspect into the faith."

While Mary is a common name for Catholic churches, probably most parishioners don't know about how the parish name was chosen or what the title means.

For example, Our Lady of the Holy Souls Church in Little Rock apparently is the only church named after this title in the United States. It was certainly the first when the mission was established in 1927. Bishop John B. Morris chose the church's name.

"Bishop Morris chose to make the new mission a memorial to his lifelong devotion to the holy souls in purgatory and to the Blessed Virgin Mary and he named it Our Lady of the Holy Souls (in Purgatory)," according to the parish's history.

Many longtime parishioners admitted they didn't know about the parish's name or how it was chosen. A shrine inside the church to Our Lady of Confidence is more easily identified by members.

"She is our second patron, I guess you could say," Msgr. LeSieur said of the medallion brought to the parish from Rome by longtime pastor Msgr. Francis Allen in 1954.

"Our Lady" is a common title to give to Mary as a sign of respect and honor. In French she is called Notre Dame and in Spanish she is Nuestra Señora.

Our Lady of Good Counsel in Little Rock gets its name from a painting in Italy named "Our Mother of Good Counsel" created in the 1400s. The image shows the child Jesus resting in his mother's left arm. A similar image is also linked to the Catholic heritage in Albania. The people there even celebrate two feast days each year in her honor although April 26 is most commonly celebrated as the feast day. Several popes are credited with having special devotions to Our Lady of Good Counsel.

In Little Rock the first pastor in 1894 also had a similar devotion and named the church after it.

Our Lady of Good Hope was chosen as a way to link the church in Hope to one of the oldest Marian devotions dating back to Mezieves, France, in 930.

According to the Mary Library at the University of Dayton, in 1871 Our Lady of Hope appeared as the "Madonna of the Crucifix" in Pontmain, France. There she gave a message of "hope through prayer and the cross."

While there is only one Our Lady of Fatima Church (and School in Benton) in Arkansas, many parishes take the name of the popular Marian apparition. Our Lady of Fatima appeared to three children six times in 1917 in Fatima, Portugal.

In Mexico she is honored under this title after she appeared to St. Juan Diego outside of Mexico City in 1591. Her image appeared on Juan Diego's garment and that tilma is displayed today in the basilica in Mexico City for millions to see each year.

Many of the churches named St. Mary do not have records of why that name was chosen over other saints or devotions.

In St. Vincent, the first church was named Our Mother of Perpetual Help in 1880.

"In 1931 when the church, as we know it today, was completed, the cornerstone was printed with the name St. Mary's on it, which covers all titles for the Blessed Virgin. I would think that is why people began shortening the name and calling it St. Mary's," secretary Linda Shoelen said.

Tara Piatt, secretary at St. Mary Church in Paragould, said the parish's first name in 1890 was Maria Einsiedeln based on the first pastor's hometown of Einsiedeln, Switzerland, and his education at Maria Stein Abbey. The name then later officially was changed to the Presentation of the Blessed Virgin Mary.

In Batesville, the Catholic community was first under the patronage of St. Fideles in 1910 and then was changed to Blessed Sacrament in 1935. When a former Protestant church was bought in 1965, the parishioners decided to rename the parish St. Mary in honor of the Blessed Mother.

"St. Mary of the Springs in Hot Springs is so named because of the many mineral springs in this National Park," said Charles McDowell, parish secretary.

Churches named for the Assumption are located in Atkins and Booneville.

Mary Mother of God, located in Harrison, refers to an often misunderstood title for Mary. As the mother of Jesus, she is also the mother of God. Since 431 AD, Mary has been recognized as "Theotokos," or "Godbearer" in Greek.

Sacred Heart of Mary is located in Barling. It refers to the veneration of the heart of Mary started in the ninth century but became more popular when the Miraculous Medal was given to St. Catherine Laboure in 1830.