Catholics you want to know: David and Judy Peters

The Peters enjoy working with altar servers, their 45 'children' 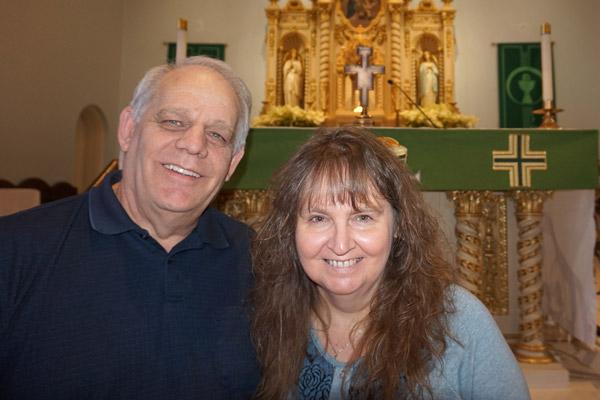 Why you want to know David and Judy Peters: For about four years, David Peters has been the altar server coordinator at St. Mary Church. With the help of his wife Judy, the two create an environment of teamwork and pride. It is emphasized that they are not just serving; they are “serving on God’s holy altar” and are to be role models of the faith, he said. The Peters reward "their" children, everything from earned special distinctions like Senior Altar Server to giving them “St. Mary’s altar servers ROCK” T-shirts. The couple also leads a program called “It’s Time,” that reintroduces fallen-away Catholics to the steps of the Mass and the meaning behind each ritual because “they want the Eucharist; they want to come back and they just don’t know how,” David Peters said.

Family: David and Judy have been married 25 years this April. They have no biological children, Judy said, “We have 45 altar servers that are our children.”

In their own words

Arkansas Catholic wants to know — How do you feed your spiritual life?

David: I’m an avid reader. I do read the Bible, but also just reading religious books. I’m doing the Little Rock Theology Institute, third year. That has really opened me up to reading a lot more than I ever have before.

Judy: I do a Bible verse exchange with one of my friends. So I do the odd days, he does the even days, so that kind of keeps me on my toes … We look up different verses. If I’m having a hard time, he might look up a verse that pertains to my day or what’s going on in my life or it might just be something out of the blue, an encouragement.

As an altar server coordinator, you attend all four weekend Masses to both support and train servers before or after Mass. In the sacristy there are inspirational quotes and training posters you’ve hung detailing each altar server role, along with photos of your altar servers. In what ways do you reward them for their efforts?

David: We go to Magic Springs (theme park annually); we try to do group activities … Probably the best thing I’m known for with the altar servers is the thumbs up. As they come back from the Mass, as they’re walking back down the aisle, I’m usually right there in the back to greet them … The thumbs up, a pat on the back, that goes further than any Magic Springs (trip) or anything else like that; just to know that they’ve done a good job.

Why is it important for you to celebrate altar servers and what they do?

David: A lot of times I feel like they’re not recognized. It’s kind of like the priest — they’re there and they just expect them to be there. They don’t realize they have to come early, they have to train, they have to stay late, they have to clear the altar, blow out the candles.

Judy: I think altar serving encourages vocations and not just for the priesthood, but our vocation for whatever it is, whether it’s to be a parent or an accountant or a sister.

Judy, you serve as chair of the liturgical committee. What do you hope to accomplish?

Judy: My vision for the liturgy committee is to educate or reeducate the people on why we use incense, what is the purpose of using incense? Why do we have the different liturgical functions? Why is it important that sometimes we’re green, sometimes we’re white, sometimes we’re red? That’s my vision is to reeducate people why the liturgy is so important because I grew up Southern Baptist (and converted in 2010) and we didn’t have that and that’s such an important part of the Catholic Church.

David, you also converted to the Catholic faith 35 years ago from Assembly of God church. How does that help in your role as RCIA coordinator?

David: I’ve been kind of through everything … I became Catholic, stepped away, then came back … We’ve had people who have been going a couple of years. We try to give them the information to make an intelligent, informed decision, but not trying to pressure them because you can’t pressure someone into a religion.

You own The Gables Inn Bed & Breakfast. How do you live out your faith at work?

Judy: We try not to push our religion on people, but we do have crucifixes in the house, we have an old Catholic Bible from the late 1800s, we have Jesus pictures on the wall.

David: It’s not overbearing, but it’s our house … it goes back to the Bible verse Matthew 16:15, when it says, “But who do you say that I am?” … I think a lot of times there’s a disconnect in what we do and how we live … is he Lord Savior on Sundays or is he Lord Savior just when we need him? The other times we just kind of put him on the back shelf? I think we have to live our faith.